Synopsis: RAYBURN SWANSON understands loss. His only teenage daughter was kidnapped five years ago and since then, he has slipped into a downward spiral of alcoholism and self destruction. After his daughter went missing, Rayburn swore off hunting and trapping and decided to help the very animals he used to kill by establishing a self-sufficient wildlife sanctuary that borders the inhospitable Boundary Waters Wilderness. Now he spends his days drinking and monitoring the animals’ activity with a series of closed-circuit cameras that surround his secluded property. His life becomes in jeopardy when Rayburn spots something horrifying on one of the security monitors; a killer, dressed in a ghillie suit, hunting a girl on Rayburn’s sanctuary who resembles his missing daughter. Determined to save the her, Rayburn sets off into the wilderness in a race to find her before the killer does.

Strong atmosphere and acting compensates for an otherwise pedestrian narrative in the familiar but nonetheless effective thriller ‘The Silencing’.

Its moody tone is established right from the beginning, with a birds-eye view of the Minnesota woods where it is set followed by a long shot of a woman’s body floating down a stream meandering through the woods.

A serial killer is on the loose, preying on teenage girls and hunting them using atlatls with arrows marked by the initials ‘MB’. Unfortunately for the new local Sheriff Alice Gustafson (Annabelle Wallis), not many in town, especially the local Indian community, like her very much. To make matters more complicated for Alice, her younger brother Brooks (Hero Fiennes Tiffin), who has a drug problem, may be connected to the case.

Joining the fray is reclusive Rayburn Swanson (Nikolaj Coster-Waldau), a former hunter turned guardian of the town’s wildlife sanctuary; not surprisingly, Rayburn believes that there is a connection between the latest discovery and the disappearance of his teenage daughter Gwen five years ago, resolving therefore to track down the killer and find out just what had happened to her.

Rayburn gets into the hunt when he catches the image of a young girl being chased through his part of the woods by someone in a full ghillie suit. Though he is initially wounded by the killer’s spear, Rayburn preserves to find the girl and eventually shepherds her safely to his own cabin. Alas, the killer manages to trace the both of them down, leading to a confrontation that sets the stage for a series of twists and turns before the final reveal.

To writer Micah Ranum’s credit, the mystery itself is fairly clever, especially with a red herring thrown in halfway through to keep you guessing. The pacing is also just right, not too rushed such that the story loses focus and also not too deliberate to lose your interest. What is somewhat less convincing is the motivation of the killer when his identity is finally revealed. The same can be said of the other characters, which the script fails to develop sufficiently.

That we still root for Rayburn is credit to Coster-Waldau’s compelling turn as a grieving father; though the writing could be stronger, Coster-Waldau carries the role with conviction, and makes the eventual closure feel utterly visceral. Wallis is fine enough, but she is even more handicapped by a script which gives her much less to work with. The rest of the supporting cast get even shorter shrift, and we’d especially have liked to see Fiennes Tiffin given a more significant part to play in the story.

On his part, director Robin Pront builds a strong sense of place throughout the movie; with ace cinematographer Manuel Dacosse, both the deep woods and the town’s spareness lend the film a suitably grim visual palette that complements the grittiness of the storytelling. Pront also keeps the violence in check, so that the movie does not descend into shlock.

‘The Silencing’ may not break genre boundaries, but it is a sufficiently decent entry that relies on atmosphere, acting and action to keep you engaged. If you’re looking for a 90-minute distraction in the cinema, you could do much worse than this slow-burn thriller, especially fans of ‘Wind River’ or HBO’s ‘True Detective’ who need a serial killer thriller fix.

(Strong atmosphere, acting and action make this a familiar yet effective thriller that should satisfy fans of 'Wind River' and HBO's 'True Detective') 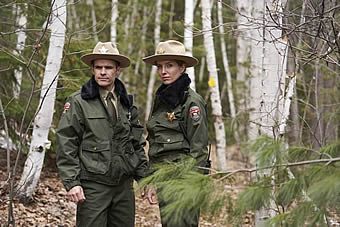