Synopsis:  Rambo must confront his past and unearth his ruthless combat skills to exact revenge in a final mission. A deadly journey of vengeance, RAMBO: LAST BLOOD marks the last chapter of the legendary series.

Even though the second to fourth films saw John Rambo become a one-man war machine to take on various Communist regimes in Southeast Asia, the very first ‘Rambo: First Blood’ was really a small-town thriller which had John struggling to overcome the nightmares of his time as a soldier in the Vietnam War. And in that respect, this supposedly final chapter of the Rambo franchise is a fitting conclusion, seeing as how it finds John enjoying a quiet life on an Arizonian ranch; that is, of course, before the teenage girl whom he has looked after like a daughter is kidnapped by the Mexican cartel.

Like each one of the other ‘Rambo’ movies, Sylvester Stallone not just stars, but also co-scripts the exploits of one (of two) of his most iconic characters; and just like he did with the last Rocky Balboa film (not counting the ‘Creed’ spinoffs), shrewdly avoids trying to recapture the glory days. As much as John remains haunted and bound by his past, the movie itself doesn’t have to be and isn’t, so you’ll find a much older and more wearied John than before. That also means you should not expect him to reprise his signature pose of shooting two machine guns on either shoulder at all; in fact, rather than take the fight to his enemies, John baits and waits for them to bring the fight to him, in order to use the element of surprise and preparedness to his advantage.

For that matter, those expecting a no-holds-barred action flick will certainly be disappointed; rather than let the action drive the storytelling, Stallone takes time to let his audience (many of which would likely have grown up with the character) re-acquaint themselves with John, as well as his newfound relationship with his foster daughter Gabrielle (Yvette Monreal) and her aunt Maria (Adriana Barraza), before unleashing the action in controlled measure. Indeed, Stallone makes it clear it isn’t that John cannot put his violent past behind him, but that he is driven by vengeance to exact the same pain on those who have hurt the ones he cares about the most.

So while it isn’t dull, the first half is pretty much just set-up that sees Gabrielle ignore both John and Maria’s advice to head into Mexico to see her father who had abandoned her and her mother as a child, and ends up falling prey to a prostitution racket which her do-no-gooder friend Gizelle (Fenessa Pineda) is part of. In the same breath, it also establishes the utter contempt of the Martinez brothers who run the operation, who say that in their line the girls are no more than things (and not people) to them. Suffice to say that there is no redeeming quality to either of the brothers, whether the more poised older one Hugo (Sergio Peris-Mencheta) or the more brash younger one Victor (Óscar Jaenada).

Whereas a younger John would certainly have beaten the shit out of a whole gang of Mexican gangsters, the 73-year-old Stallone lets Rambo be brusied, bloodied and beaten unconscious by them during their first confrontation, and has to be nursed back to health by a female journalist (Paz Vega) who so happened to be tailing the very mark he was pursuing to track down Gabrielle. Like we said earlier, given his relative physical state, John taunts them (by cutting the head off one of the Martinezs and tying him to the bed no less) and waits for them to come to him on his ranch for a final showdown that puts the Rambo in his name.

That last stand is not just the piece de resistance of the film, it is also the only full-blown action sequence in the entire movie, with the earlier scenes limited to swift (but still vicious) moves which John springs on his enemies. Facing down close to 20 men at the same time, John resorts to taking him out using a whole menagerie of booby traps consisting of trip wires that set off explosions, rifles and trap doors. Not content to see them maimed, pierced or blown apart, John often adds a finishing spray of bullets, while reserving the most brutal finish for the other Martinez with a bow and arrow and his own very, very sharp knife. It is violent all right, but never so over-the-top that the action tips into caricature.

Next to the last three ‘Rambo’ films, this one is probably much milder; yet, we’d much prefer a more human Rambo than one that defies the ages of time. Given how he has pretty much determined how the character has evolved over the years (which the closing credits recaps through a nostalgic montage of some of the more iconic scenes from the earlier movies), Stallone gives a befittingly world-weary portrayal that probably reflects how the actor himself has seen the world change over the past few decades. On his part, director Adrian Grunberg keeps the pace tight throughout a lean 100 minutes, while painting an empathetic portrait of John by emphasising his physical and emotional vulnerabilities.

As the last chapter, ‘Rambo: Last Blood’ is an elegiac farewell to a character whose relevance has probably faded over the years. Even though the world is still made up of good and bad guys as John warns Gabrielle before she makes her ill-fated trip, John’s methods are somewhat anachronistic, especially given how the war movie genre has itself transformed. Seen in that light, you’ll appreciate how Stallone has crafted this farewell for himself as much as for his fans, and even if Rambo doesn’t draw as much blood in his last as he did in the first, it is probably for the better.

(Stallone lets age, emotion and even devastation come to Rambo, and this concluding chapter of the legendary series is all the better for it) 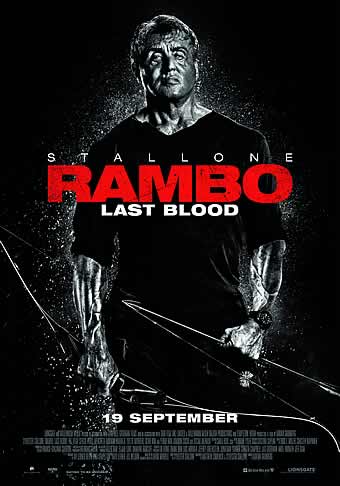