Synopsis: Based on a graphic novel, "Bullet to the Head" also tells the story of a New Orleans hitman (Stallone) and a New York City cop who form an alliance to bring down the killers of their respective partners.

Much has changed – and we aren’t just talking about the number of wrinkles on action star Sylvester Stallone’s face here. Boy, aren’t we surprised to see Christian Slater in this Walter Hill directed action flick. The name rings a bell? You’d probably remember Slater from movies from the 1990s – like True Romance (1993), Broken Arrow (1996) and Hard Rain (1998). A welcome return? Not exactly, because Slater’s appearance in this 91 minute movie is nothing more than a cameo, with a role that, well, can be easily substituted by any other B grade actor out in the streets.

The real star here, is, of course, Stallone. As if seeing him in The Expendables (1 and 2!) isn’t enough, the man we would prefer to fondly remember as Rocky Balboa and John Rambo plays a hitman in this movie adapted from a graphic novel. The New Orleans hitman forms an unlikely alliance with a Washington DC detective after both their partners are gunned down by the same baddie. What follows is a no brainer shootout flick which would please only fans of the genre, and does pretty much nothing else for other audiences.

To be fair, you have to give it to Stallone. At the age of 66, the dude is still slogging it out on screen (kinda reminds us of Asia’s own action superstar Jackie Chan though). It’s like seeing your Dad shooting bullets, getting bruised, running from one target to another – except that your old man may not have a good bod like Stallone’s. The New York born star is joined by American Korean actor Sung Kang, whom you may find familiar from The Fast and the Furious: Tokyo Drift (2006), Fast & Furious (2009) and Fast Five (2011). Here, he’s not just the Asian dude. The 40 year old actor actually gets a substantial amount of screen time, and the character is, dare we say it, pretty well developed for an action movie of this genre.

Alas, that’s about the good things we have to say about the movie. The rest of it is your standard popcorn trash: loud explosions, noisy car chases and predictable plot developments. The bad guy played by Jason Momoa (you may recognise him from TV’s Game of Thrones) is nothing more than a forgettable villain, a beefcake at that. Other supporting characters are played by Sarah Shahi, Adewale Akinnuoyoe Agbaje, and, yes, the guy whom we used to be impressed with: Slater.

Each of this relatively unknown star doesn’t bring much to the movie, except to scowl and groan between the loud action music score by Steve Mazzaro. The cinematography by Lloyd Ahem II and the editing by Timothy Alverson is like Walter Hill and Kevin King Templeton’s screenplay – bland and mediocre. So what’s in it for Stallone, who will be returning to big screens in the third installment of The Expendables (he will be joined by Jackie Chan – hooray!) soon? If anything, it’s respect from those who have enjoyed his glorious past, and for that, you’d willingly sit through this numbing action movie. 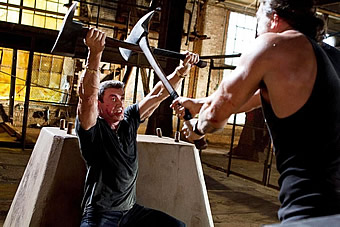 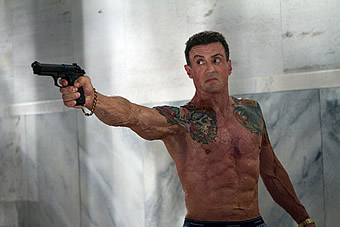 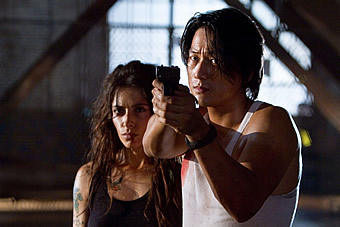 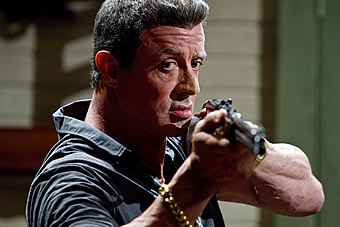 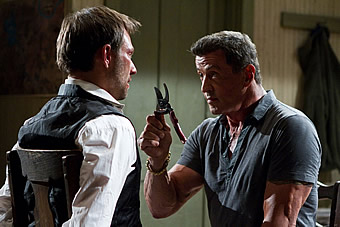 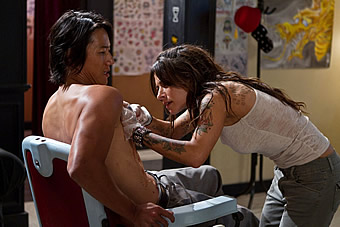