Synopsis: Kevin is a driven and competitive high school student. He wants to take on the challenge of joining the track team, just like his elder brother. But he is embarrassed during the tryout. Then, Ellie – the senior of the track team, who’s well-known for her intense ways, trains him. The training seems nothing out of the ordinary, but they discover love during the training sessions. As they get closer, unforeseen incidents are about to separate them. Can they beat the odds and see each other again?

At a time where almost everyone you know is posting pictures of their exercise routines on social media comes a movie about running in extreme conditions. Clocking a 3 km run on Runkeeper doesn’t count when you compare it to a 50 km run across tough terrain and weather. Produced by superstar Jay Chou and directed by Los Angeles based Simon Hung, 10,000 Miles is a sport drama loosely based on Taiwan’s ultramarathon runner Kevin Lin.

In order to pursue a scholarship, country boy Kevin (Huang Yuan) decides to follow his elder brother (Darren Wang Da-Lu from Our Times) into track and field in college. But when the course is filled up and seeing the potential in him, Kevin is mentored by the school’s assistant coach Ellie (Megan Lai) instead. Training turns into love as the two develops feelings for each other over time. When a severe injury threatens to derail Kevin’s running career, Ellie feels that the only way to push Kevin to carry on is to leave his side.

For a movie about running, the focus isn’t really about running which is a pity. Hung who also contributed to the screenplay spent a bulk of the screentime on Kevin and Ellie’s on-and-off relationship. For a start, Kevin’s motivation to run is a blur. At first, he seems to be following his brother’s goal. At a later stage, Ellie’s becomes Kevin’s desire to carry on running. Perhaps it’s too complicated to dramatize a sports movie about running that instead of sports movie clichés, we have a leading lady who has a tragic past and suffering from heart disease – clichés that honestly don’t really belong here.

While Darren Wang received top billing, his elder brother character is hardly scene stealing which actually has far more potential than the character of Kevin. The audiences know very little of him except he has to resort to robbery in order to support his pregnant girlfriend and he is also very protective and encouraging of his younger brother. Their father played by veteran Long Shao Hua is dead against Kevin’s decision to pursue running as a career and there’s a cute couple who runs the neighborhood’s small provision shop that ended up sponsoring Kevin’s first ultramarathon run. However instead of fleshing out the dynamics of Kevin’s family and other far more interesting plotting, the story is kind of stuck in a rut for most of the running time.

Technicalities on the whole are solid. The slick title, which boasts a handsome budget, showcases some wonderful cinematography, on location shooting and a costly CGI wolf which at the end of the day is underused. The relatively fresh face Huang Yuan whose father is actor/singer Michael Huang is kind of stiff in certain crucial scenes though he does shows potential in the acting department. Rather than emphasizing on how clichéd her character is, Megan Lai (Café Waiting Love) is the real star of this movie. Like mentioned earlier, Darren Wang despite having three releases this December is criminally underused, suffering the same fate as the CGI wolf.

10,000 Miles is Jay Chou’s first produced effort and it does shine particularly well in the technical aspects. Unfortunately, the heavy-handed romance took away much of the spotlight of an underdog story of determination and inspirational that the theme of ultramarathon becomes more of an afterthought. For fans of Jay Chou, yes he does make a cameo as a taxi passenger.

(Hardly inspiring or tug at your heartstrings, 10,000 Miles simply doesn’t bring you to the right track) 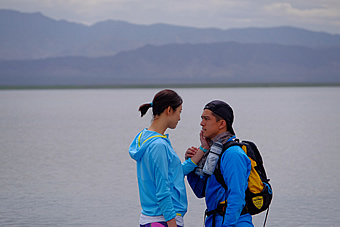 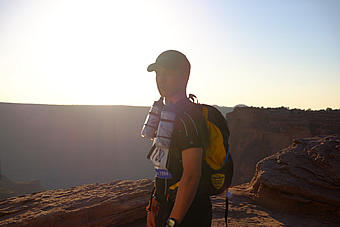