Synopsis: A storm is heading to the city of Hong Kong, and with it comes another occurrence so destructive, it vows to bring down everything it touches. A crew of seasoned criminals led by the notorious Nam (Hu Jun), armed with high-powered weapons, pulls off another smooth and violent armored car heist in broad daylight in a crowded street. Whoever tries to get in their way, they will show no mercy. This puts the police force to shame and humiliation.

If there is one Hong Kong action thriller to watch this year, it is without any doubt the exhilarating ‘Firestorm’. Emboldened by the success of last year’s ‘Cold War’, co-producer Bill Kong has set veteran screenwriter Alan Yuen to stage an all-out, no-holds-barred cops-versus-criminals action film set in and around downtown Hong Kong. The result is simply jaw-dropping to say the least, choreographed and executed on a scale we believe has never before been seen in any Hong Kong movie, and better still, complemented by a tight engaging script that draws you into its character-driven plot and never lets go till the last frame.

There is a hitch though - it does start off rather bumpily. The opening minutes try to pack too many details at one go. A prologue tries to establish Andy Lau and Gordon Lam’s respective characters as rivals on the judo mat when they were still kids. Flash forward quickly to present day and Lau’s Inspector Lui is the godfather to his informant’s (Patrick Keung) autistic daughter. Meanwhile, Lam’s ex-con To has just been released from prison, and despite promising his girlfriend, Bing (Chen Yao), that he has turned over a new leaf, quickly falls back on the wrong side of the law. All that backstory makes for a pretty confusing start we must say, but you’ll start putting things together once the first major action sequence rolls along.

Led by Hu Jun’s Nam, a crew of hardened criminals pulls off a daring midday heist on an armoured car. Flawlessly executed and backed with better firepower than the Hong Kong police force, they not only make off with the loot, but also in the process expose the ineptness of Inspector Lui and his partner’s (Kenny Wong) team. To rub salt onto their wounds, Nam turns up right after the crime at the police station to taunt Lui by claiming to be a good and responsible citizen returning the badge of one of the police officers who had dropped it during the melee. The cops’ only lead lies in To, apprehended at the scene of the crime for ramming his car into that of Lui’s but claiming that it was no more than an accident.

The trailer would have you know that To eventually becomes Lui’s informant, but it isn’t quite so straightforward. Indeed, Yuen saves what you might expect would be another ‘Infernal Affairs’ variant for something much more unpredictable; instead, he focuses his attention in the first half of the movie building up the rivalry between Lui and Nam, the former a strict and rigorous officer of the law who firmly believes that his work is his mission and the latter a smart and cunning criminal mastermind with little restraint and even less mercy. Emphasising Lui’s convictions as a police officer, the battle of wits between Lui and Nam is meant also as a test of Lui’s own tenacity and, by extension, just where his breaking point lies.

To reveal anything more will not do any justice to Yuen’s surprisingly twisty and compelling narrative, which plots a gripping trajectory on the way to the formation of a shaky alliance between Lui and To. Except for a deus ex machina that effectively substitutes Nam for another equally vicious criminal named Pak (Ray Lui), the storytelling is pretty much top-notch, deftly using a whole host of characters and their respective motivations to drive the many twists and turns along the way. Chief among that is of course just what will force a law-abiding police officer to his knees such as to abandon his deeply held morals, but aside from that, the more poignant question is in fact what would make a seasoned criminal ‘surrender’ his personal allegiance to the police.

Especially inspired is Yuen’s decision to save Lui and To’s alliance till the very end, by which time it isn’t so much whether To will ultimately betray Lui but whether the latter will do so the former, seeing as how Lui is no longer the rational minded policeman he used to be at the start. It’s a pretty nifty twist, made even more exciting by how it plays out right in the middle of an intense gunfight between Pak and his crew with the full force of the Hong Kong police in the middle of a busy street in the Central district. That extended climax is well worth the price of admission alone, not least for the exceptionally coherent choreography by veteran Chin Kar-Lok but also the sheer effort the filmmakers had taken to film what must have been a logistically mind-boggling sequence.

But it isn’t just by the sheer scale and intensity of this last showdown that you’ll be blown away; without any doubt, Chin has outdone himself yet again with quite possibly some of the most daring action scenes performed on the busy bustling streets of Hong Kong. From the opening heist to a confrontation between Lui and Nam’s men within a public housing apartment building to a stakeout at a public square in between the Sheung Wan and Central area to the final all-out bullets ballad in the heart of Central, the stunts are never less than thrilling every step of the way - and breathtaking even - for the boldness in imagining and then the dedication to execute them.

Amidst the action, Yuen has assembled some of the most recognisable faces in Hong Kong cinema to fill the screen. Not since his award-winning role in ‘Infernal Affairs’ has Andy Lau played a detective with such gravitas, his turn as Inspector Lui a thoroughly compelling one that fully expresses his character’s moral predicament. The ever charismatic Hu Jun proves an excellent foil, cool and cunning every step of the way. Meanwhile, Gordon Lam is equally solid in a supporting turn especially in the last third of the film where his character finally gets a shot at redemption. Besides these key players, fans of the genre will also be delighted to see Ray Lui, TVB actor Kenny Wong, Terence Yin, Michael Tong and even SDU veteran Michael Wong in a bit role.

And for Yuen’s ambition of filming a true-blue Hong Kong police thriller, we must say that he has not only accomplished that with ‘Firestorm’, he has done so exceedingly. This is by far one of the most thrilling Hong Kong action thrillers you’ll ever see, not just for its heartstopping action sequences but also for its captivating story of choices, consequences and ultimately principles. It is even better than last year’s ‘Cold War’, mounted much more confidently and intelligibly on a larger and more textured canvas. It is Hong Kong cinema at its most electrifying, living thoroughly up to its name of being a lightning rod for future such police thrillers to come.

(The must-see Hong Kong action thriller of the year that’s packed with exhilarating action, a compelling plot, and a commanding lead performance from Andy Lau) 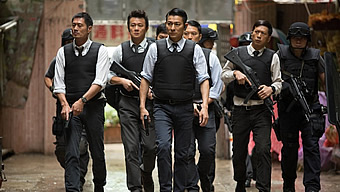