SYNOPSIS: GENERATION UM... follows a day in the life of John and his two beautiful cohorts, Violet and Mia as they wander through their lives, immersed in sex, drugs and indecision. When John steals a camera, he finds inspiration in his directionless life. He turns the lens on Mia and Violet and the girls open up about their past and how it has informed their present lives. As they navigate their daily routine of bars, crowds and New York City living and as they out-do one another in terms of revealing the decisions and doubts that led them to their escort service lifestyle, all three embark on a path of self-discovery.

Despite having Keanu 'Neo' Reeves on the DVD cover, this is through and through an indie film. You can’t even classify Generation Um… as an arthouse title, an experimental one is the better answer.

If there’s a decent plot or story, I will be glad to provide you. Alas, there isn’t. Writer and director Mark L Mann prefers a non-linear way of telling his tale about a man, John (Reeves) and his voyeuristic journey with two escorts, Violet (Bojana Novakovic) and Mia (Adelaide Clemens).

Well, John is not really a pervert; he is just a bored, lonely, aimless 40 year old driver for the two sexy escorts. Probably disappointed with how his life turns out and still receiving a $75 check from his mom on his birthday, he roams the streets of New York and at the spur of the moment stole a camcorder and starts shooting and quizzing the lives of Violet and Mia. Eventually, their sexual histories and Mia’s abusive childhood is revealed in truth nothing that comes of their mouths are remotely interesting or relevant to the entire affair.

Added on to all the found footage-like sequences and endless moments of random shots liked watching Violet peeing, snorting coke, sipping coffee, drinking red wine, hopping around in her panty and a minute worth of Reeves munching on a cupcake, it’s a frustrating watch that lead us to question what’s the point of Mann’s film. There is so little insight to the three characters, no shocking revelations and the dialogue sounds it’s improvised on the spot by the actors making the 98 minutes running time overlong and ill-conceived.

The only exception is the actors who seems to be enjoying their little indie outing. A-list Hollywood actor Keanu Reeves looks and plays the part of a loner perfectly. Bojana Novakovic and Adelaide Clemens are excellent as call-girls, it’s a shame they should be in a better production. Ironically, John encourages the girls to "say something interesting" at one point in the film and that is likely Mann’s plea to the actors.

Both audio and visual are serviceable in this DVD. 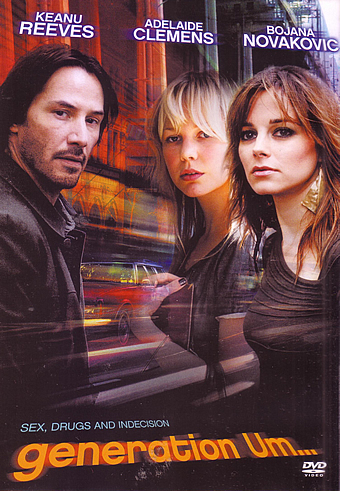