Synopsis: Chile has it all: gorgeous landscapes, smokin’ hot women, cool dudes, great wine, and the wildest parties. For a hapless American tourist, nicknamed Gringo by his two Chilean pals Ariel and Pollo, the trip has been heaven on earth — except that he just can’t hook up with the ladies. Gringo’s luck seems to change when the group meets a trio of babes who agree to accompany them on a trip to the coastal town of Valparaíso. The new friends are having the best of times whooping it up in a dance club, until a violent earthquake brings the entire city down around them. With this one-time paradise now a landscape of death and destruction that’s seething with terror and panic, our unlucky heroes must run for their lives from looters, escaped convicts, and the inevitable aftershocks.

Continuing with his perennial theme of young, often spoiled, American vacationers getting caught up with nasty stuff during their exotic vacations overseas, Eli Roth heads to the coastal city of Valparaiso, Chile, to pose as the “Gringo” caught up in the bowels of the city’s filth when a massive earthquake and several huge aftershocks bring out the worst in the people there. Indeed, though the first half hour might entice you to go visit the city for its picturesque beauty, we’re pretty sure that rosy feeling will be gone by the end of the movie.

At least the Chilean authorities will probably be happy with Nicolás López’s unnecessary preamble, which is altogether an all-too-long introduction to Roth’s divorced lawyer with a daughter and his two Chilean pals, Ariel (Ariel Levy) and Pollo (Nicolas Martinez). Gringo likes the vineyards, but his pals prefer the night life, and so most of what we end up learning about them revolves around their hunt for women around clubs and parties. By the time the quake actually hits, they would have made the acquaintance of a pair of Hungarian sisters - the wild Kylie (Lorenza Izzo) and her more cautious sister, Monica (Andrea Osvart) - and a Russian model Irina (Natasha Yarovenko).

Unfortunately for us, “Gringo”, Ariel and Pollo are no Wolf-pack (a la “The Hangover”), so listening to them banter ain’t particularly enjoyable or for that matter interesting. In fact, the dialogue and situations in López and Guillermo Amoedo’s screenplay are pretty banal, so much so that even at a brief 89 minutes, the movie threatens to outstay its welcome by its first third. To make matters worse, the subsequent hour hardly makes the frustrating wait worthwhile.

If it had seemed at that point strange why Roth would be the brains behind such a tame exercise, then what follows after will certainly put to rest those doubts that the filmmaker has yet to abandon his “Hostel” tendencies. The first quake strikes when “Gringo” and his friends are at an underground club, and as revellers are impaled, dismembered and trampled during the melee, it becomes clear that López and Roth share the same wavelength as filmmakers. Oh, did we mention, Ariel has his hand severed while helping an injured woman, and the desperate search for his severed hand is mined for some low comedy?

It doesn’t get better once they get out. A tsunami warning sounds, and the rickety old cable cart they put Ariel on to get him to safer higher ground snaps and crashes on the way up. There are looters on rampage on the streets and prisoners on the loose. Run, hide, dodge, rinse, repeat - that seems to be the formula López happily adopts, and other than staging a vast array of grisly deaths, the filmmaker doesn’t seem to pay much attention to the other aspects of moviemaking like continuity or pacing.

Indeed, López doesn’t care much about his characters once the mayhem begins, and genre fans might have some fun confounding their own expectations about who lives, who dies and who dies when. But that cavalier attitude arguably makes the first half-hour slog even more annoying - after all, why bother to waste our time indulging in these characters when each one is in fact as disposable and dispensable as the next? Yes, we might as well also warn you at this time not to expect a happy ending for any one of them, for López has no intentions of sparing even the last man - or for that matter, woman.

What he has intended however is deliver a B-grade splatter-fest in the guise of a disaster movie, and only in terms of genre mixups and twisting the usual conventions does ‘Aftershock’ seem to have a point. Otherwise, it is hardly clever, not quite engaging, and only mildly gore-rrifying, and on the Richter scale, too mild to ultimately leave a lasting impression.

(A lot of gore in a pretty bad disaster movie - if that’s your thing, ‘Aftershock’ might still rock your world; otherwise, don’t bother) 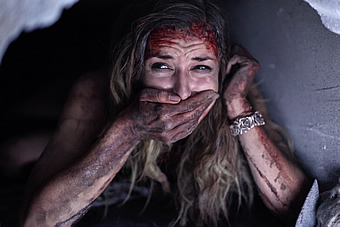