Synopsis: In the Hasidic community of Boro Park, Brooklyn, a despondent young man, short on both faith and funds, reluctantly agrees to assume the responsibility of an overnight shimmer and fulfill the Jewish practice of watching over the body of a deceased member of the Orthodox community. With only the company of the recently departed and an ailing widow who expresses cryptic reservations as to the man's ability to carry out the task, he soon finds himself exposed to a terrifying haunting within the claustrophobic confines of a home that has become host to a malevolent entity. In what is essentially a one-man show, Dave Davis is profoundly affecting in his portrayal of the hesitant sentinel, exuding an empathetic combination of frayed nerves and timid weariness. Throughout this uncanny night, his vigil gradually transforms into a harrowing spiritual investigation of both his cursed surroundings and his pitiable past - a journey in which the very recesses of his community's collective trauma...

If you’re looking for full-blown horror, you won’t find that in ‘The Vigil’; instead, director Keith Thomas’s feature film debut aims and succeeds at being an exercise in minimalist horror. Drawing from Jewish superstition, it tells of a young Hasid who takes a job as a ‘shomer’ and becomes the target of a malevolent dybbuk that used to haunt the deceased person whose corpse he is watching over.

Said Hasid is Yakov (Dave Davis), whom we first meet popping pills in a bathroom while at a Brooklyn support group for those who’ve left their closely-knit communities and seeking to venture into secular society. Yakov seems more troubled than the rest of his group members, though it is only later on that we discover what it is exactly that has made him this fragile.

Unbeknownst of the danger his state of mind will put him in, Yakov accepts the offer from his former rabbi to keep watch over the body of a Holocaust survivor. The ‘shomer’ previously hired for the gig had run off, and Yakov sees it as an opportunity to make some easy money. The only other person in the house is the deceased’s wife Mrs Litvak (Lynn Cohen), who warns him when she first sees him that he is not right for the job and should get out as soon as possible.

Alas Mrs Litvak’s words are taken for that of a dementia-addled person, and Yakov decides to settle in for the night. The disturbances come slowly but surely – flickering lights; noises from the ceiling; apparent hallucinations; and last but not least, an alternately nice and creepy Mrs Litvak who shows Yakov to the basement where he learns about the demon that had attached itself to her husband back at Buchenwald. Many of these are standard tricks in the horror playbook, but Thomas uses them effectively by keeping a tight grip on build-up and pacing.

If it isn’t yet already obvious, most of the movie is set within the Litvak’s residence over the course of one fateful night; even so, Thomas and his cinematographer Zach Kuperstein make the most of light and shadow as well as the house’s cramped interiors to convey a palpable sense of foreboding throughout the movie. Much of the horror is also implied, so don’t be expecting to catch the dybbuk until late into the movie; and it should also be said that those familiar with Jewish identity, rituals and tradition will probably appreciate the nuances within the movie a lot more.

Given how the whole movie is pretty much centred on Yakov, it is to Davis’ credit that we remain emotionally invested in his character’s fate. Without ever going over-the-top, Davis conveys the rising anxiety of a man struggling to make sense of his surroundings while grappling with his own internal nightmares. Cohen lends a steady hand in a supporting role, but this is ultimately Davis’ showcase and he makes the best out of every scene he is in.

Like we said at the start, if you’re expecting any full-blown horror, you’d probably be left disappointed by the minimalist approach that Thomas has taken with his movie. Even though Blumhouse’s profile has grown in recent years, ‘The Vigil’ harks back to the sort of low-budget fare that they had made a name of for themselves in the horror genre. So even though it doesn’t reinvent the genre, this is still a refreshing entry for its unique and authentic Jewish setting; if anything, it establishes Thomas as a filmmaker you’d want to keep watch over.

(An effective minimalist horror, 'The Vigil' boasts a strong lead performance by Dave Davis and a unique yet authentic Jewish setting) 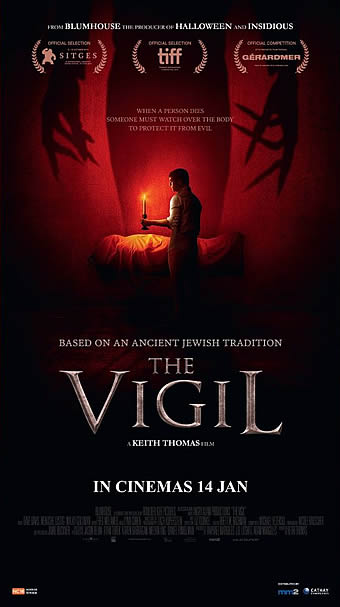