Synopsis: Be careful who you pray to.... On the holiest weekend of the year comes The Unholy, which follows Alice, a young hearing- impaired girl who, after a supposed visitation from the Virgin Mary, is inexplicably able to hear, speak and heal the sick. As word spreads and people from near and far flock to witness her miracles, a disgraced journalist (Jeffrey Dean Morgan) hoping to revive his career visits the small New England town to investigate. When terrifying events begin to happen all around, he starts to question if these phenomena are the works of the Virgin Mary or something more sinister. The Unholy is produced by Sam Raimi, Rob Tapert and Evan Spiliotopoulos, written for the screen and directed by Evan Spiliotopoulos, and is based upon James Herbert’s best-selling book Shrine.

Sam Raimi’s production outfit, Ghost House Pictures has produced no more than twenty horror thrillers in the past decade or so. From mid-budget horrors liked Drag Me To Hell, 30 Days of Night to relatively low-budget thrillers liked Don’t Breathe and The Possession. Most are terrible to say the least but nevertheless, it’s one of the easiest formula in Hollywood to bring in the dough. Everyone it seems loves a cheap scare.

In yet another supernatural horror produced by Raimi and directed by Greek-American filmmaker Evan Spiliotopoulos, a disgraced journalist, Gerry Fenn (Jeffrey Dean Morgan from The Walking Dead) hoping to revive his career decides to visit a small New England town to write about a case of mutilated cows. But after stumbling upon a creepy doll buried under an oak tree, he learnt that a hearing-impaired woman, Alice (newcomer Cricket Brown) is cured after claiming to see visions of the Virgin Mary. Soon after, she is performing her own miracle healing powers on those who are sick. Not exactly a man of faith, Gerry soon learns that he has an amazing story happening before his eyes. No more fake stories.

Virgin Mary or not. Gerry and Father Hagan (William Sandler) who happens to be Alice’s uncle soon believes otherwise. Besides having Gerry poking his nose all over, the cast also includes the town doctor, Natalie (Katie Aselton), a local bishop (Cary Elwes) who managed to get Rome to send in Monsignor Delgarde (Diogo Morgado), a church inquisitor out to disprove this so-called miracle. A story always needs characters regardless of their relevancy to fill up and The Unholy is no exception. Will Gerry manages to tell the truth, sell a lot of papers and revive his flagging career or will he find himself consumed by the devil?

While the source materials points to a 1983 novel called Shrine by James Herbert which explored themes of demonic possession and faith healing, the adaptation by director Spiliotopoulos is more of a subdued version of the literary work. It has a few interesting ideas littered throughout but unfortunately, concepts remains as just pure concepts. Even though the story promises something sinister is in the works, the entire game is already given away in the prologue in which we see a woman being hammered and hanged alive in 1845 for using witchcraft. You know for sure that’s not the Virgin Mary behind the miracles.

The question lies in why the entity is back. What is that ghostly cloaked figure with talons haunting those sceptical folks? And it’s up to Gerry to embark on his investigation. Liked Negan in the later seasons of The Walking Dead, Gerry is trying to redeem himself in the process. He has a chequered past of fabricating stories but now he is determined to find out the truth behind Alice’s visions. As it turned out, The Unholy is more of an investigative thriller than an all-out horror fest. Spiliotopoulos knows how to build the mood and intensity though his constant reliance on jump-scares and loud sound effects can be quite a turnoff. The overall CG effects are modest not particularly awful considering it’s a low-budget outing.

Perhaps it’s just a cautionary tale about miracles and false prophets or perhaps it’s a religious detective thriller but it’s the charming presence of Jeffrey Dean Morgan that makes the watching experience bearable at the very least. The latest offering from Raimi’s Ghost House Pictures has a similar theme as The Nun, a demonic film rooted in Catholicism and church. Both offering a demon in disguise and an investigative figure and both being too mediocre to leave much of an impression.

(Not much of a scare nor contains any genuine chill, quite possibly a weak contender for horror of the month) 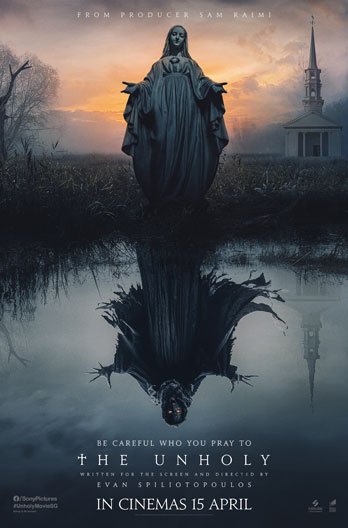