Synopsis: Starring Academy Award® Nominee John Hawkes, Academy Award® Nominee William H. Macy and Academy Award® Winner Helen Hunt, the film is based on the true story of California–based journalist and poet Mark O’Brien. Portrayed by the exceptionally gifted John Hawkes – who gives a career-defining performance, O’Brien’s story is the immensely poignant and surprisingly funny tale of a man, paralyzed by polio who - at age 38 - is determined to finally lose his virginity.

Rarely is the topic of sex treated with the maturity and candour that ‘The Sessions’ demonstrates, and that in itself makes writer-director Ben Lewin’s film fresh and interesting. Even more unexpected is how Lewin’s film in fact explores sex in the context of the sexual awakening of a 38-year-old quadriplegic male named Mark O’Brien, who in real life was a victim of childhood polio. Yes, you read that right, he’s a 38-year-old virgin, but one who’s practically bedridden and whom you never would have thought possessed the physical capacity for it.

No thanks to his disease, Mark is unable to control most of his body, spending most of his time on artificial respiration in what is referred to as his “iron lung”. Despite his disability, the man attended the University of California, Berkeley, shuttling between class and his apartment using a motorised gurney – that is, until he was deemed a safety hazard. The opening prologue establishes his background, as well as his wish to experience sex before what he knows is his imminent death in a few years.

The only impediment besides his physical condition is his Catholic faith, which is where William H. Macy’s Father Brendan comes into the picture. Putting aside his initial reservations, Father Brendan eventually assures him, “I know in my heart that God will give you a free pass on this one — go for it.” So he does, contacting a centre at Berkeley specifically set up to assist the disabled with sexual issues, and receiving a referral which brings him to Cheryl Cohen Green (Helen Hunt).

Cheryl’s a sex surrogate, and in case you’re wondering if that’s merely a euphemism for prostitute, Cheryl points out to Mark that the two are different. Her job is part therapist and part sex partner, essentially to assist her clients to learn about the sexual act so that they can then share that intimacy with their loved ones – although in the case of Mark, he doesn’t quite have one in mind yet, since the first person he had developed feelings for was a former caregiver Amanda (Annika Marks) who was scared away by his sudden proposal of marriage.

It might come as a surprise for some that persons with disabilities do have their sexual needs as well, and Lewin makes it crystal clear that in this regard, their urges are by no means diminished by their physical debilitations. In fact, so too their emotional needs – basically their desire to receive love and affection – which are as strong as ours. And then, as the sessions begin, it’s fascinating to reflect on how one intertwines with the other, just as how they often do for us in life.

The question here really is this – can there be sex without love? Although Cheryl keeps her sessions clinical, the same cannot be said of Mark, who upon their first sexual encounter, starts projecting his feelings onto her, so much so that during intercourse, he involuntarily tells her that he loves her. His regular talks with Father Brendan will also reveal as much, and bringing his feelings into their sexual therapy not muddles the doctor-patient relationship that Cheryl aims to maintain, it also complicates Cheryl’s own personal life.

It is ironic indeed that whilst Cheryl tries to help others to have sexual intimacy with their partners, her own sexual relationship with her husband is somewhat lacking – though the reason why their marriage is cordial rather than passionate is never quite explained. But still, that dimension reinforces the core theme of the film – can sex and love be separated from each other – especially since Cheryl’s affections seem to be leaning more and more towards Mark instead of her own husband.

Staying true to Mark’s own autobiographical experience, there is no grand Hollywood-style ending to their physical and underlying emotional connection. Instead, it ends just as abruptly as it had begun, leaving Mark more physically complete as an adult human being but ironically even more emotionally empty. Of course, there was to be a silver lining to that whole life-changing experience before he would pass away back in 1999 at the age of 49 – though that isn’t the subject of the film and therefore not explored in much detail.

Although it focuses on just one episode of his life – which Mark had written in an article for the literary magazine The Sun called “On Seeing a Sex Surrogate” – Lewin uses it to offer up an engrossing look at a person who refused to be defined by his impediments. Not only is that demonstrated in his determination to write by holding a stick in between his teeth to tap words on a computer, it is also shown in the way he continues to maintain a sunny wise-cracking optimism despite being fully aware of his own physical limitations.

The fact that we leave the film with such a full-bodied understanding of Mark is testament to John Hawkes’ brilliant performance, of which we feel that the actor has been robbed of at least an Academy Award nomination for. His character’s physical limitations mean that Hawkes only has his face and voice to express Mark’s struggles with love and God, and the actor uses both to convey his character’s hopes and fears while making his character funny and endearing.

Hawkes has a perfect complement in Hunt, who rewards one of her best screen opportunities in recent years with a brave and unrestrained performance. Whereas Hawkes has only his face to work with, Hunt has to do so with her whole body, albeit often without clothes. Not that she doesn’t look great at the age of 49, but Hunt truly puts herself out there to play a woman who uses her body as an instrument for instruction. Her Cheryl is also a finely tuned balance between warm and cold, that allows her partner to feel relaxed in order to perform sex but yet not too comfortable to forget it is but a lesson.

Lewin too walks a tight balance, in his case, by managing without a fault the more clinical bedroom scenes between Mark and Cheryl and the more convivial scenes between Mark and Father Brendan. In treating sex with a humanistic touch, he makes this sexual journey one that is emotional, physical, affirming, heartfelt and uplifting. And with 'The Sessions' through the unlikely protagonist of a physically disabled person, Lewin has created a truly exceptional movie that respects the oft-portrayed but oft-misunderstood act of sex as both the physical and emotional desire to be intimate with another human being.

(You’ll be hard-pressed to find another film that treats sex with the same maturity and candour as ‘The Sessions’ does – and this is a warm, funny, charming and ultimately uplifting movie about the universal need to feel loved on the outside as much as inside) 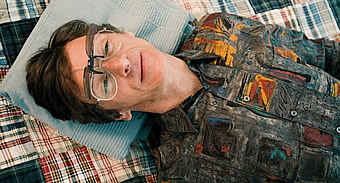 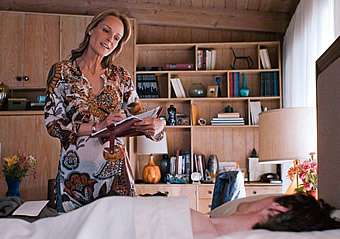 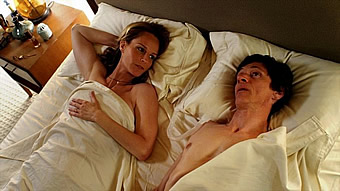 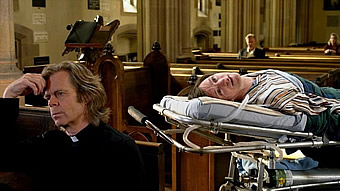 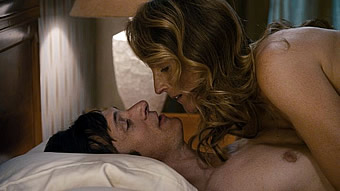 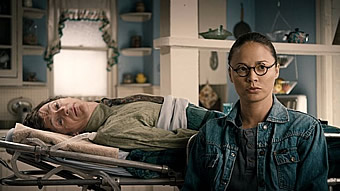