Synopsis: THE LAST FIVE YEARS by Tony award winning composer/lyricist Jason Robert Brown is a musical deconstruction of a love affair and a marriage taking place over a five year period. Jamie Wellerstein is a young, talented up and coming Jewish novelist who falls in love with Cathy Hiatt, a Shiksa Goddess struggling actress. Their story is told almost entirely through songs using an intercutting time line device; all of Cathy’s songs begin at the end of their marriage and move backwards in time to the beginning of their love affair while Jamie’s songs start at the beginning of their affair and move forward to the end of their marriage. They meet in the center when Jamie proposes. Its beautiful pop music score portrays an honest, heartbreaking, often funny, exploration of love and it's consequences on individual identity.

‘The Last Five Years’ won’t be the first that attempts to depict the ups and downs of a relationship from the guy and the girl’s perspective; as recent as last year, writer-director Ned Benson used the same conceit to portray ‘The Disappearance of Eleanor Rigby’. What differentiates Richard LaGravenese’s film is that his is a musical, but not a musical in the sense of ‘Mamma Mia’ where the song-and-dance numbers are interspersed with spoken dialogue; rather, almost every single line here is sung by its lead actors Anna Kendrick and Jeremy Jordan, which essentially falls on the music and lyrics to convey the gamut of emotions that the respective characters Cathy and Jamie are going through.

Adapted by LaGravenese from Jason Robert Brown’s off-Broadway production, it stays extremely faithful to its source material not only for the fact that it remains by and large a two-person show but also because of how its narrative is structured. The beginning is literally the end here, as Cathy sings about how she is ‘Still Hurting’ from the dissolution of her marriage with Jamie. And then a funny thing happens. Switching back and forth between Cathy and Jamie’s musical numbers, it lets Jamie tell his side of the story in chronological order, starting from when they first meet and how he is simply overjoyed to be dating outside his Jewish heritage. On the other hand, it flips Cathy’s side of the story around, so she starts at the end, taking us back through the middle and back to the start when they first move into their apartment in New York City.

Where do the parallel narratives meet? At the point Jamie and Cathy get engaged, and for the first and only time in the musical, share a duet underneath a gazebo in Central Park. The structure may seem unusual at first, but it starts to make complete sense once one gets past the halfway mark. Indeed, the wisdom of this narrative conceit lies in how it lulls one into thinking about the similarities in their respective struggles as an artist – i.e. Cathy as a performer in the theatrical arts and Jamie as a novelist – before letting its audience realise how misaligned their circumstances are in time. Yes, while Jamie quickly finds success after success after his first book is picked up by Random House, Cathy’s search for accomplishment proves just as elusive, leaving the pair more and more mismatched over the years.

Because the whole story is sung, the strength of the narrative lies entirely on the depth of its lyrics. The music may be ho-hum, but Brown’s lyrics are bitingly clever and insightful, offering an honest, raw and witty glimpse into a couple from different backgrounds whose attraction, based on how exotic the other was from his or her own environment, slowly but surely fades as they assimilate into a multicultural Manhattan. Though the stage show was a two-person show, LaGravenese loses none of the intimacy of what is essentially a two-hander chamber drama even as he adds that touch of realism by replacing sets with actual apartments, parties, book readings and even the great outdoors.

But a huge part of that credit goes to Kendrick and, to a slightly lesser extent, Jordan. She does most of the dramatic heavy lifting here as a woman who is trying to find her own success outside her husband’s shadow but inevitably feeling the insecurity of being someone less. And yet, Kendrick never lets her character’s anxieties get the better of her – the actress also nails the comedy in the material, whether singing about her misadventures doing summer stock in Ohio or lamenting about what it is like to audition for the stage (where men are usually gay, staring at their crotch or even at her resume). Oh, and the fact that she has one of the finest singing voices in Hollywood doesn’t hurt too. Next to Kendrick, Jordan matches her voice but less so her ability to inject nuance and vulnerability into his character, so we end up connecting less with Jamie than Cathy.

Yet, for what it is, there is no doubt that ‘The Last Five Years’ is pretty engaging stuff. To compare it with the conventional Hollywood musical would probably be unfitting, since it is ultimately based upon a play built around just two stage performers singing their hearts out to their audience. All the qualities that have earned the musical its fair share of lovers and haters are similarly on display here, and in making the transition from stage to screen, LaGravenese loses none of the humour or heartbreak that was so original about his source material. It is also a perfect warm-up to get to know Kendrick, just before she brings the house down in this summer’s ‘Pitch Perfect 2’.

(Honest, raw, intimate and poignant, this ‘His’ and ‘Her’ depiction of the breakdown of a five-year relationship is an impressive two-hander by Anna Kendrick and Jeremy Jordan) 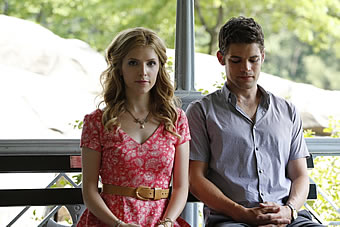