Synopsis: The latest film from writer-director John Carney (ONCE), BEGIN AGAIN is a soul-stirring comedy about what happens when lost souls meet and make beautiful music together. Gretta (Keira Knightley) and her long-time boyfriend Dave (Adam Levine) are college sweethearts and songwriting partners who decamp for New York when he lands a deal with a major label. But the trappings of his new-found fame soon tempt Dave to stray, and a reeling, lovelorn Gretta is left on her own. Her world takes a turn for the better when Dan (Mark Ruffalo), a disgraced record-label exec, stumbles upon her performing on an East Village stage and is immediately captivated by her raw talent. From this chance encounter emerges an enchanting portrait of a mutually transformative collaboration, set to the soundtrack of a summer in New York City.

Begin Again is director/writer John Carney’s latest effort, telling the story of how a heartbroken British songwriter, Gretta (Keira Knightley) meets down-and-out music producer Dan (Mark Ruffalo). The plot does not sound especially groundbreaking, and there are indeed few surprises in the film. The storyline is largely predictable – Gretta performs at a pub and attracts the attention of Dan, and they collaborate to cut an album. Through the process, the two main characters get closer and solve problems plaguing their personal life.

With the high level of predictability, the stereotypes, surprisingly, add a dash of much needed humour. The film also tries, and was somewhat successful, to provide a critique on the current music industry. Through Dan, the film blasts the inane lyrics and unimaginative rhythms present in current popular music. On the other hand, Gretta’s refusal to surrender 90% of her album earnings to the record label blasts the large corporations for taking large cuts from the artiste while not doing much.

In essence, the film revolves around music – the industry, the stereotypes, the songs – and primarily, the power of music to bring people together and pull others apart. This might sound cheesy, but it might be true. Gretta and Dave were first drawn together by a discussion about music, and later, gets even closer to the point of sharing their playlists. Through making Gretta’s album, Dave’s family also reconciles. Ironically, when one becomes familiar with another’s music, nothing can be kept from each other, making betrayal and cheating harder to hide, although this is a bit of a stretch.

Being a musical, it is important that the film’s music, original compositions by Gregg Alexander, Danielle Brisebois, and Glenn Hansard, amongst other composers, does not disappoint. In fact, the songs, performed by Knightley, Adam Levine and Hailee Steinfield, are easily its highlights. Standouts include ‘Lost Stars’ performed by Knightley and Levine, and ‘Like A Fool’, by Knightley. Knightley’s singing is unexpectedly good, changing from raspy to saccharine, which compliments the songs and makes her convincing as a lovelorn and sentimental songwriter.

The film’s music also receives a boost in street cred through the inclusion of Maroon 5’s frontman, Adam Levine. In Levine’s first movie outing, he plays Gretta’s boyfriend-turned-rock star, Dave, a largely one-dimensional role. This is a pity, actually, as fans would probably expect more screen time and development in Levine’s character. Hence, and perhaps unsurprisingly, Levine’s greatest contribution to the film is his distinctive singing voice and experience at being, well, a rock star.

As a whole, the film is enjoyable and feel-good, portraying New York City as a place where dreams, musical dreams in this case, can come true. A main drawback for us, however, is the awkward pairing of Knightley and Ruffalo. Perhaps it is the differences in ages, or styles, or personalities, but these two actors are an odd mix. As both characters take long gazes into each other’s eyes, it would a good time then to close your eyes and enjoy the soundtrack in the background.

(Despite being largely predictable, Begin Again is enjoyable film, with the original compositions performed by Knightley and Levine acting as the main draw) 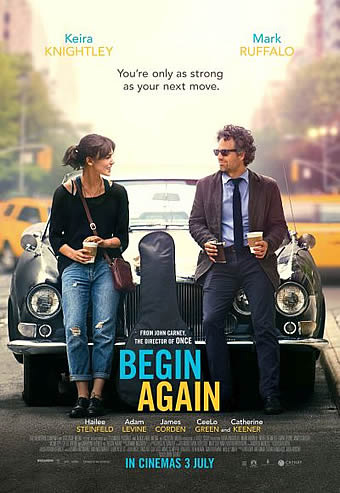 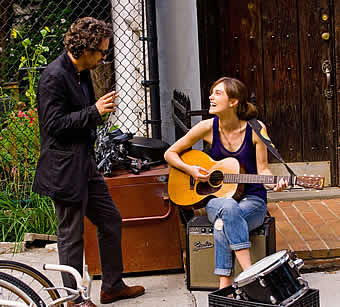