Synopsis: In the thriller, Rachel (Blunt), who is devastated by her recent divorce, spends her daily commute fantasizing about the seemingly perfect couple who live in a house that her train passes every day, until one morning she sees something shocking happen there and becomes entangled in the mystery that unfolds. Based on Paula Hawkins’ bestselling novel.

Comparisons with ‘Gone Girl’ are inevitable, and yet ‘The Girl on the Train’ is, by nature of its bestselling source material, meant to be a much more probing drama at upper-class ennui with its attendant dysfunction and pathology. Like the former, Paula Hawkins’ bestselling 2015 novel was spun as a murder mystery – and without revealing any spoilers, let’s just say it isn’t the titular female, who is but one of the three female protagonists around which the whodunit revolves around. Rachel is the name of the one who rides the Metro-North commuter train along the Hudson into and out of New York City every day, a routine she keeps up despite having lost her job months earlier due to her alcoholism. The daily pantomime is really for the view – not only that of a seemingly perfect suburban couple she names Jason and Jess because she doesn’t know of their real names till later, but also of her former Westchester County home on the same street where her ex-husband Tom now lives with his new wife Anna (or former mistress) and baby daughter.

That Rachel is in a sorry state precipitated by Tom’s infidelity during their marriage years is reason for our sympathies, even more so because she is portrayed with feverish commitment by Emily Blunt in an uncharacteristic performance. Oh yes, the actress usually seen in smart physical roles is unflinching playing a troubled divorcee who in her binge-drinking bouts floods Tom with text messages and phone calls to let out her barely controlled rage at Tom. Just as Hawkins did, the film’s screenwriter Erin Cressida Wilson retains her first-person perspective in telling her sad tale, and it goes without saying that her frequent black-outs make her a somewhat unreliable narrator. But this is a story from three points-of-view, the other two being Anna (Rebecca Ferguson), whose picture of contented domesticity is a façade with cracks that will reveal themselves gradually, and Megan (Haley Bennett), the one Rachel initially calls Jess whose real life is far from the fantasy Rachel has concocted in her booze-addled mind.

Not just the fractured perspectives, the film also inherits the book’s shifting timelines, which is intended to be revealing of the individual narrators yet obscuring the mystery of one of their disappearance which unites them all. It is through these multiple voices that we also learn about the three males which complete the story – the serial cheater Tom (Justin Theroux) who had also hit on Megan when she was helping to baby-sit his child, Megan’s possessive husband Scott (Luke Evans), and last but not least Megan’s therapist Kamal (Edgar Ramirez) whom Rachel catches Megan exchanging a kiss with one day. The beauty for those encountering the mystery for the first time is discovering the connections between these characters and the ironies that bind them – Rachel wanted a child but could not have one; Anna ended up bearing one with her ex Tom; and Megan can have a child but doesn’t want one – which Wilson and her director Tate Taylor bring together fluidly.

The same pleasure will certainly be lost on those who have read the book, for which Taylor’s depiction of the themes of marriage and motherhood and the anxieties and ambivalences around both only compensate marginally. Like he did with his last movie ‘The Help’, Taylor draws out strong acting from his three female actors here, but unlike that inspirational drama, he is here caught between the serious-minded and the inherent trash appeal of the potboiler surrounding the three female characters. Because of the latter, the former misses the novel’s psychological depth, which is ultimately crucial to finding out just how and why Rachel, Anna and Megan are depressed in their own ways; and yet, the latter in itself is not as clever or intriguing as it wants to be, given how the motivations of the key suspects are actually not that difficult to figure out. Taylor is also hardly the master of suspense (as ‘Gone Girl’s’ David Fincher was) and often struggles between genres to find a consistent tone.

To be sure, ‘The Girl on the Train’ is equal parts murder mystery and suburban drama, the latter founded on the curiosity we often have of what goes on in the houses and homes we pass by. In particular, Rachel, Anna and Megan are intended as different versions of the not-so-perfect lives that go on within the beautiful houses we admire and envy in suburbia, but Taylor shortchanges the characters by letting their respective misfortunes descend into melodrama. Though not entirely of Taylor’s doing, his film is also let down by an ending that isn’t as clever or surprising as one is expecting it to be. Like we said at the start, as unfair as it may be, the comparisons with ‘Gone Girl’ are unavoidable, and between the two – whether by book or by film – this is the lesser, and would have been much less if not for bravado performances from the female ensemble.

(If not for the unflinching and feverishly committed performance of Emily Blunt, this journey into the dysfunction and pathology of upper-class ennui would have been a waste of time) 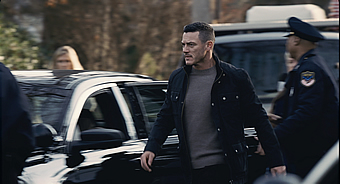