Synopsis: A supernatural thriller set in the legendary Aokigahara Forest at the base of Mt. Fuji in Japan. A young American woman, Sara (Natalie Dormer of “Game of Thrones” and “The Hunger Games”), goes in search of her twin sister, who has mysteriously disappeared. Despite everyone’s warnings to “stay on the path,” Sara enters the forest determined to discover the truth about her sister’s fate – only to be confronted by the angry and tormented souls of the dead that prey on anyone who wanders into the forest.

So slightly more than a decade after ‘The Grudge’, Hollywood has decided to take its own original idea to Japan – rather than the other way round – for a horror movie, though we hardly blame you for feeling sceptical about the excursion. For one, instead of casting a Japanese in the leading role, it resorts to convention to bring an American woman all the way to Tokyo and sets her up with yet another American who just happens to be in the area. For two, it calculatedly weaves a tale of fiction around the real-life Aokigahara Forest, a dense jungle at the northwest base of Mount Fuji in Japan notorious for being the most popular site for committing suicide in Japan. And yet, despite these obvious reservations, ‘The Forest’ is in fact a pretty decent low-budget horror, one that incorporates J-horror tropes into a surprisingly suspenseful story of psychological malaise.

Through a series of flashbacks occurring as the twenty-something year-old Sara Price (Natalie Dormer) journeys to the Land of the Rising Sun, we are told of how she has a twin sister named Jess working as a school teacher in Tokyo who has mysteriously disappeared into the titular Suicide Forest about five days ago. Convinced by her unspoken connection since young that Jess is still alive, Sara leaves her boyfriend in the States and goes alone in search of Jess – that is, even though she is warned by one of Jess’ former students that her sister may very well have become one of the ‘yokai’ (or ‘angry spirits’) roaming that part of the woods. Somewhat too fortuitously, Sara runs into a reporter named Aiden (Taylor Kinney) working for an Australian travel magazine who takes an interest in her predicament and offers to let her use his guide Michi (Yukiyoshi Ozawa) to explore the forest in return for giving him permission to write about her.

As they always do, things take a turn for the worse after she steps off the beaten track – not only does she start hearing voices all around, Sara becomes disillusioned after seeing a schoolgirl who claims to carry a message from Jess not to trust Aiden. Is Aiden whom he says he is? Is he hiding some secret from Sara? Did he know Jess and if so, was he in some way responsible for her disappearance or worse death? Sara plays with these doubts in her mind even as we are teased with these same uncertainties. According to Western horror, Aiden would probably have met Jess a few days before and be at the very least linked to her fate; but as any self-respecting J-horror fan will tell you, you’ll do wiser than to trust an innocent-looking schoolgirl who claims to be helpful.

Not to spoil any surprises for those intending to find out the truth on their own, but let’s just say that the script credited to Ben Ketai, Sarah Cornwell and Nick Antosca does a fairly competent job of keeping you guessing right up to the very end. Oh yes, there is also a nice backstory along the way about their tragic childhood that is the reason why Sara and Jess were raised by their grandmother instead of their parents, and the connection between the age-old adage that ‘it is all in your head’ and exorcising one’s own personal demons is a nice touch. It is equally commendable that the writers do not try to imitate M. Night Shyamalan, opting instead for an ending that carries a nice twist but doesn’t pull the rug from beneath their audiences’ feet.

Against a finely balanced screenplay, commercials’ director Jason Zada makes a fairly successful feature filmmaking debut that juggles a sustained atmosphere of dread and foreboding with jump-in-your-seat moments, the latter in particular noteworthy for being effective even as you anticipate that something is going to go ‘boo’ in your face. Despite initial fears to the contrary, Zada remains culturally sensitive to the origins of his setting, treating the subject of suicide, its victims and would-be victims with utmost dignity and empathy. Deserving of mention too is ‘Game of Thrones’’ Dormer, who pulls off a compelling double-act as Sara and Jess, identical twins whose differing personalities have been unknowingly shaped by their experience of that tragic event from their childhood.

To be sure, ‘The Forest’ won’t be a classic anytime soon, but you could do and could go much worse with a film like this. What starts off as a collection of clichés – whether the twin that goes in search of her missing sibling or the dreams that she has which are somehow meant to be omens or warnings of what had happened – and trite jump scares turns out to be much more by the time the credits run in this effectively brief 94-minute movie, melding the fundamental elements of J-horror with a psychological thriller that will be more familiar to audiences on a diet of Western horror. Such an East-meets-West premise could go wrong in so many ways, so it is indeed more than faint praise that ‘The Forest’ doesn’t get lost in itself.

(A chillingly effective blend of Western psychological horror with J-horror tropes, 'The Forest' juggles choice jump-in-your-seat moments with a sustained atmosphere of dread and foreboding) 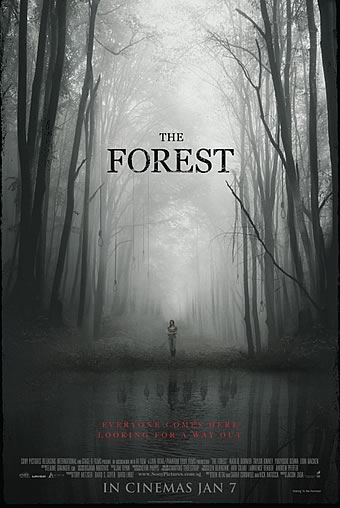