Synopsis: In an arsenal during the warlord era in China, a girl, accused of stealing bullets, is shot to death by the Boss. Six months later, a series of murders occur. Policemen Bao and Guo investigate the case. But all the clues point to the dead girl! They then discover that “stealing bullets” is a cover-up for a conspiracy between the Boss and the Police Chief. The latter tries to have Bao and Guo killed, but that increases their determination to solve the mystery. Finally, they find the real murderer…

The first we see Lau Ching Wan’s superintendent Song Donglu, he straps a noose around his neck and kicks off the chair – all for the sake of seeing firsthand the physical signs of someone who commits suicide from hanging. It is a bold introduction no less, especially since it immediately recalls one of Lau’s best films – Johnnie To’s ‘Mad Detective’ – in which he played an equally eccentric investigative persona. Aside from the similarities in personality and detail-oriented deductive skills however, the setting is entirely different – but one that this thriller is all the better for.

Taking place in the Tiancheng prefecture during China’s warlord era (similar to that of producer Derek Yee’s earlier ‘The Great Magician’), co-writer and director Lo Chi Leung spins an impressive whodunit around the heady elements of industrial unrest and bureaucratic corruption. Any direct exploration of the social subtext might trigger attention from the Chinese censors, so Chi-Leung and his other screenwriter Yeung Sin-Ling focus their attention on the mystery at hand, allowing what references that may be drawn to the industrial unrest plaguing the country today to emerge subtly.

The title refers to a string of puzzling murders at a bullet factory where the bullets seem to have disappeared after the acts. While many of the workers immediately attribute the deaths to the vengeful spirit of a female employee who had been accused of stealing and thereafter forced into a game of Russian roulette with the boss (Liu Kai-Chi), Song is not so sure – and together with another young detective Guo Zhui (Nicholas Tse) dubbed the fastest sharpshooter in the precinct, attempt to unravel the mystery before it claims its next victim.

Those who think that the answer might be rather straightforward will be sorely mistaken, for Lo demonstrates ambition by assembling a host of supporting characters who may or may not be connected to the murders. With the deftness of Agatha Christie or even Sir Arthur Conan Doyle, Lo takes turns casting doubts on each of these characters and their possible motivations, leaving his audience guessing till the final reveal. That means too that it does take a while before the mastermind finally comes to light, but what overplotting Lo and Yeung might be guilty of along the way is ultimately overcome by Lo’s tight control over the unfolding narrative.

Not content to be just another Christie suspense novel, the movie also delves into the psychology of criminal behaviour through the mind of Song, who believes that there is no such thing as a bad person. Illustrating this point is a completely unrelated subplot that shows the demure Fu Yuan (Jiang Yiyan) plotting “the perfect crime” of her husband’s (Chin Kar Lok) murder – depicted in a humorous Chaplin-esque way – the former of whom in prison becomes somewhat like a muse to Song to better understand the criminal mind. Song’s belief that there are just “good people turned bad” is increasingly challenged as he comes up along greed and corruption, and kudos to Lo for adding an additional layer of intellect into the twisty proceedings.

Besides the mystery at the heart of the tale, the movie also rests on the chemistry between Song and Guo, their pairing of which has been compared to that of Sherlock Holmes and Watson. Nonetheless, this isn’t the Robert Downey Jr and Jude Law equivalent that you might be expecting, but a more traditional one in the spirit of the books – so really while Song is largely the brains of investigation, Guo assumes the role of the brawn. This might be the first time that Lau and Tse are cast opposite each other, but the two heavyweight actors complement each other with finely nuanced performances that do not draw too much attention to their respective character’s idiosyncrasies.

Both also look like they fit right into the opulent period setting, brought vividly to life by gorgeous costumes and elaborate sets that project both the stylish and the seedy side of 1930s Shanghai. They are also joined by stellar supporting performances – both Liu and Wu Gang as the factory boss and shady police chief respectively delightfully smarmy in their villainous roles; as well as Yang Mi looking suitably sexy as a fortuneteller and Guo’s love interest. Of course it is ultimately Lau and Tse who own the movie, and both are consistently engaging from start to finish.

So too is the entire film, even though it might not unfold at a breakneck pace like Guy Ritchie’s ‘Sherlock Holmes’. Rather, Lo prefers a low-key expositional approach that is more in line with the deductive methodologies of the investigation and simultaneously affords space for his audience to get to know the characters – though rest assured that he still packs enough shootouts to keep the adrenaline going. Like a good ol fashioned detective story, this one packs wit, suspense and then some impressive visual pizazz – we guarantee you’ll be as intrigued as we were.

(With wit and visual pizazz, this well-acted whodunit will have you captivated in its web of intrigue) 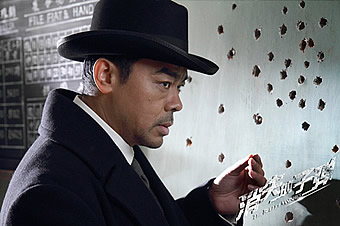 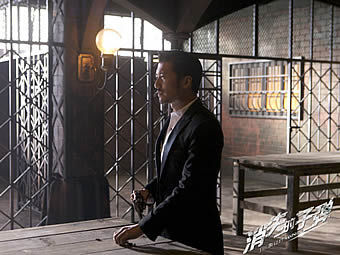 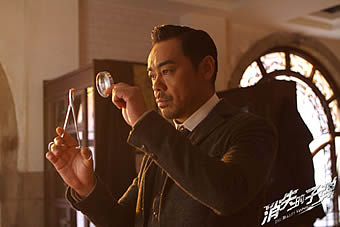