Synopsis: 1916. General Yuan Shi-kai has just died and the Japanese are encroaching. A mysterious magician Zhang Xian catches the eye of local warlord, Lei Daniu, who hopes to use him to win the affections of Liu Yin, a woman he forced into being his seventh concubine. Unbeknownst to him, Zhang is the fiancé of Liu who has been waiting for him to rescue her. Zhang, who was hellbent on destroying Lei, discovers that the man behind the evil deeds is actually his head butler Liu who has joined forces with the Japanese in his misguided efforts to unite the country. To defeat Liu and win back the heart of his love, Zhang pulls out his ultimate magic trick.

Derek Yee’s name may be synonymous with socially-aware crime thrillers like ‘One Nite in Mongkok’, ‘Protégé’ and ‘Shinjuku Incident’, but the veteran writer/director’s latest work- adapted from the novel by Zhang Haifan- shows that the man has quite the sense of humour too. Defying expectations as well by reuniting two heavyweight dramatic actors in Tony Leung and Lau Ching Wan, Yee’s ‘The Great Magician’ plays less like the historical drama you would expect it to and more like a witty comedy packed with trickery, shifting alliances and of course sleight-of-hands.

Just with its tone alone, Yee differentiates his film from Hollywood’s critically-acclaimed ‘The Illusionist’ to which it has been compared to- never mind that both movies deal with the return of a powerful magician and his attempt to win the heart of a woman he has loved before. Leung plays that very magician, Zhang Xian, who comes back to 1920s Beijing to reclaim the love he left behind three years ago and rescue his mentor imprisoned by an arrogant warlord General Bully Lei (Lau Ching Wan). Coincidentally, his lover, Liu Yin (Zhou Xun), has also been taken by Lei as his seventh wife- though despite Lei’s best efforts, he has not been able to make her fall in love with him.

The story is as much Zhang Xian’s as it is General Lei’s, and the equal emphasis that Yee gives to each character affords his audience distinct but equally delightful pleasures. There is campy fun to be had with General Lei’s scenes- whether his six wives, including an especially hardworking Third Wife played by Mainland actress Yan Ni, fighting for his attention; or his futile attempts at trying to win Liu Yin’s heart; or his condescension towards his second-in-command Butler Liu (Wu Gang)- and Yee deliberately plays them for broad laughs. Nowhere is this more obvious than in a classic scene where General Lei is discussing power plays with fellow bickering warlords (featuring cameos by director Tsui Hark and Vincent Kok), the squabbling and wrangling among them simply a riotous hoot.

On the other hand, the scenes with Zhang Xian crackle with riveting intensity. Yee successfully keeps his audience rapt with Zhang’s elaborate prestidigitation, as well as his and that of his magic troupe’s plot to kidnap General Lei for the release of the political prisoners Lei has kept imprisoned since assuming power. Zhang’s ostensible enmity with Lei- at least in the first half of the movie- also makes for an equally fascinating watch, as the former tries to overcome the latter’s inherent suspicion for someone who has (literally) always something up his sleeve. And of course, in the hands of two of the best male actors in Hong Kong, both Zhang and Lei truly come alive.

Last paired on the Johnnie To-produced crime thriller ‘The Longest Nite’ (for which both Leung and Lau received Best Actor nominations at the year’s Hong Kong Film Awards), both actors seem to be having a great time playing against their usual serious dramatic type roles. Lau gleefully hams it up in an over-the-top performance that is surprisingly endearing, especially for his well-meaning but unsuccessful attempts at trying to impress Liu Yin. On the other hand, Leung is charismatic as ever as the titular ‘great magician’ performing with poise and confidence his array of dazzling tricks. Though a trifle compared to his previous roles in ‘In the Mood for Love’, ‘2046’ or ‘Lust, Caution’, Leung is still as alluring playing the pining lover, and his scenes with Zhou Xun have an understated chemistry.

Yee engineers a number of twists and turns in the script he co-wrote with his regular collaborators Chun Tin-Nam and Lau Ho-Leung, but the most rewarding one is that which changes the dynamic between Zhang and Lei and allows them to share the screen as allies. The quick-witted Zhang and the brusquer Lei makes for an oddball but eccentrically appealing combination, and the second half of the film works like a charm thanks to the rapport and repartee between the two actors. Their engaging performances also anchor an otherwise frenetic final half-hour where Yee and his writers try to pack a lot of plot development into too little time- which admittedly also causes the tone of the film to veer quite dangerously into farce.

Mostly though Yee treads the fine line between wit and farce deftly- and even if certain scenes, especially those with Lau Ching Wan and Yan Ni, end up in slapstick, the movie is almost always smarter than what it appears to be. Yee may have been considerably influenced by the runaway success of Jiang Wen’s ‘Let the Bullets Fly’, so while it doesn’t possess the latter’s ingenuity and social acuity, there are similarities in the ‘wink-wink’ comic tone of both films. Much as it draws from historical events- the turbulent period after the fall of Yuan Shikai and his cronies trying to re-establish the Chinese monarchy- there is little to be taken seriously here, especially not when you have General Lei telling his guards to drive a tank backwards down the dust-beaten streets of Beijing because the other end of the vehicle looks nicer. It’s a departure from the usual Derek Yee films for sure, but one that’s light-hearted, witty and entertaining fun all around- besides, how often do you get both Tony Leung and Sean Lau at the same party? 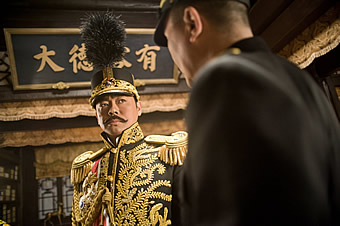 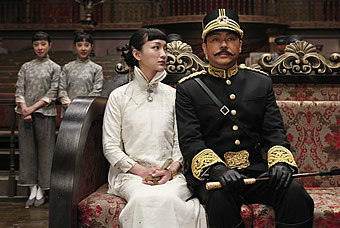 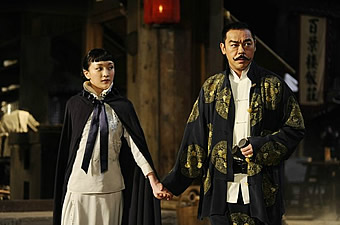 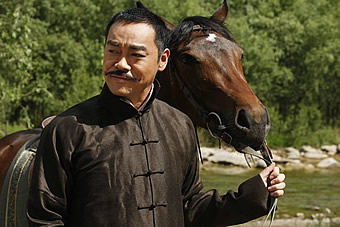 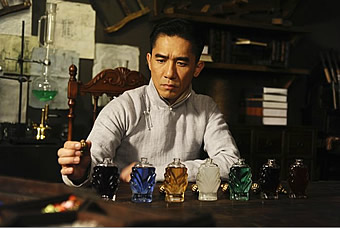 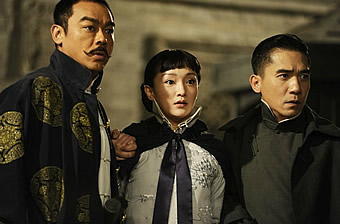 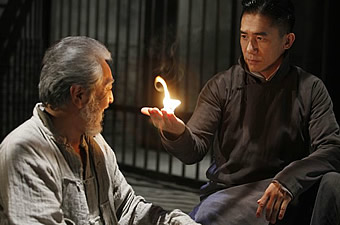