Synopsis: Cheung Choi-san (Andy Lau) is a senior inspector of the Explosive Ordnance Disposal Bureau (EOD). Seven years ago, he went undercover and became the protégé of Hung Kai-pang (Jiang Wu), a top wanted criminal specializing in bombs. Cheung successfully disintegrated Hung's criminal gang, but during the operation, Hung manages to escape while his younger brother and allies were captured. To seek revenge for Cheung's betrayal, Hung comes back seven years later and prepares to plant a series bombs in Hong Kong, which creates public panic, and lures Cheung out for action to unfold an ultimate plan for revenge.

‘Shock Wave’ builds the proverbial hostage thriller around Superintendent JS Cheung (Andy Lau) of the Explosive Ordinance Bureau (EOD) of the Hong Kong Police Force, whose arch-nemesis Peng Hong (Jiang Wu) resurfaces after seven years off the grid with dozens of armed mercenaries threatening to blow up the busy Cross Harbour Tunnel and bury the hundreds of motorists trapped within it. Their rivalry traces back to the time JS was undercover in Peng Hong’s gang, a trusted member who ultimately betrayed the latter by setting the police on him and his men during a daring bank robbery, resulting in half of them being arrested, including his younger brother Biao Hong (Wang Zi-Yi).

Besides the chance to even the score, Peng Hong’s actions this time round are also driven by greed – promising a payment of US$500 million, the conniving businessman Mr Yim (Liu Kai-Chi) had orchestrated Peng Hong’s return to Hong Kong in order to use the crisis to demand the Government acquire his company’s alternative cross-harbour tunnel Western Harbour Crossing, aiming to profit from the inevitably inflated stock prices during the melee.

As much as the vendetta between JS and Peng Hong may have teased a character-driven narrative, director Herman Yau (who co-wrote the script with his ‘Sara’ and ‘Ip Man: The Legend Is Born’ collaborator Erica Li) opts instead for spectacle-driven storytelling.

The opening scene alone is testament to that, packed with vehicles smashing into one another, machine guns shooting non-stop and a pulsating score by Brother Hung cranked up to 11 – but thanks to veteran Dion Lam’s action direction, undeniably executed with flair and finesse, even adrenaline-pumping in the good-old Hong Kong cinema way.

In between that and the similarly loud but no less thrilling shootout within the confines of the tunnel to cap the three-day hostage standoff, Yau will squeeze in at least two other such extended sequences – one that begins with a bomb defusement at Gloucester Road Garden and culminates in a race-against time down the streets of Central to dispose a C-4 in Victoria Harbour; and another that sees the police engaging in a fierce but brief firefight with the hostage-takers over two Maintenance engineers trying to escape from the adjacent tube tunnel.

Amidst these and other more minor episodes showing JS’s bomb disposal skills in action (among the more memorable ones is that involving a junior police inspector Wong (BabyJohn Choi) as well as another involving JS’s own girlfriend Carmen (Song Jia), there is hardly any room for plot or character, which seem meaningful only as filler between the gunfights and explosions.

There is no shade of grey therefore in the characters – the cops are all good guys, including JS, his second-in-command Ben (Ron Ng), his colleagues Officer Kong (Philip Keung) and Officer Chow (Felix Wong), and their superiors Commander HF Wan (Sek Sau); and the criminals, led by Peng Hong, are uniformly cruel and vicious who will kill, maim or injure with nary a hint of compunction.

There is also little attention on character relationships – a romantic subplot between JS and Carmen comes off perfunctory, and therefore falls short of generating the intended empathy towards the toll that JS’s occupational hazard exerts on his personal life; ditto the tension between JS and Peng Hong, which plays out in fits and spurts whenever narratively expedient but never builds to anything compelling.

Not all is lost though – Yau manages to convey the peril that EOD officers like JS are faced with each time they are called into action, as well as their fundamental desire to save lives that ultimately motivates them to put their own life and limb on the line. The poignant finish further underscores their sacrifice, demonstrating how survival depends as much on skill as on luck.

Each one of the bomb disposal scenes is taut and tense, choreographed with methodical precision to demonstrate the professionalism of the EOD and unfolding like a procedural to show the coordination within the EOD as well as with the other units of the police force on scene. The realism in these scenes makes them gripping to watch – whether neutralizing an old warhead by injecting congealant into the nose fuse to stabilize it or spraying liquid nitrogen onto a timed IED to literally freeze its detonation – and speaks to the homework that Yau and his actor-producer Andy Lau must have done as preparation.

Alas, with a straightforward plot and just as basic characters that fall squarely into heroes or villains, ‘Shock Wave’ fails to engage on a deeper level that ‘Cold War’ and its sequel did or even Dante Lam’s recent trilogy of cops-and-robbers thrillers. The unbridled show of firepower, be it from ammunition or explosives, suggests that Yau seems keen on following in the footsteps of Lam, who has since given up the streets of Hong Kong for the jungles of the Golden Triangle - there is even a scene early on set on the Thai-Burmese border, which is intended to answer just where Peng Hong was hiding while preparing for his return back to Hong Kong to save his brother and claim revenge on JS.

Like we said before, the emphasis here is first on the role and duties of the EOD and second on the gunfights and explosions that spring from the feud between JS and Peng Hong. What falls in between is treated mostly inconsequentially, and is therefore the reason this literally but not quite figuratively explosive thriller cannot escape the trappings of B-grade action cinema. 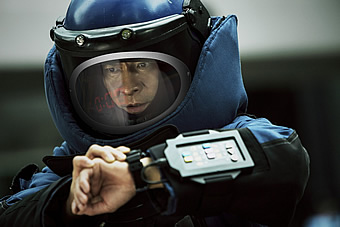 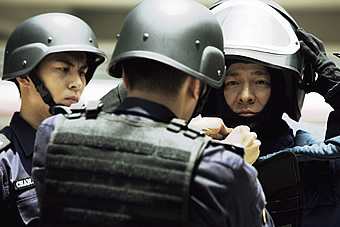 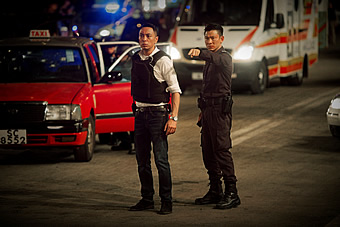