Synopsis: Mission Milano is an adventure about a wealthy entrepreneur (Huang Xiaoming) who goes undercover with an Interpol agent (Andy Lau) to protect a new invention, Seed of God, from falling into an international crime conglomerate. Together they embark on a journey to protect the invention & travel to multi cities like Macau, Hong Kong, Milan & Eastern Europe. Will they be able to accomplish their mission...?

There was a time when Wong Jing was funny. That time, unfortunately, is over, as audiences discovered over the dreadfully unfunny ‘From Vegas to Macau III’ earlier this year. ‘Mission Milano’ is his first movie after that disaster – though he has written two other equally dreary films (namely, ‘iGirl’ and ‘Girl of the Big House’) – and it is only marginally better. At the very least, there is a somewhat coherent plot to string together the mostly infantile gags, which involves Andy Lau’s Interpol Agent Sampan Hung (whose Chinese name is洪金寶) teaming up with Huang Xiaoming’s billionaire entrepreneur Louis Luo to stop a Japanese criminal organisation Crescent from selling the latest bio-technology known as the ‘Seed of God’ to a terrorist conglomerate KMAX. And yet, this globe-trotting spy spoof is ultimately done in by Wong Jing’s sloppy writing and slapdash direction, which not even the stars with their palpable charisma can redeem.

As much as it draws its name from the Italian city, ‘Mission Milano’ only spends at most a third of its time in it, hopscotching from Paris (where Andy gets one of the rare bright spots of the film fighting an unknown assassin dressed as a French maid), to Hong Kong (where he is given his current assignment by his reticent boss played by Shen Teng), to Shanghai (where he recruits Louis to help him retrieve the ‘Seed of God’), to Macau (upon sighting of one of KMAX’s cronies Iron Hawk), to Milan (where Crescent plans to sell the technology it stole to KMAX), and lastly to Central Europe (where KMAX operates from its military base complete with its own runway). All that running around from city to city is really no more than an excuse for Wong Jing to stage one lame stunt after another against a different backdrop, but there is no disguising just how juvenile, scattershot and derivative these supposedly amusing gags really are.

Stealing first from James Bond, Wong Jing gives Lau’s Agent Sampan Hung the code number 119, decorates his superior’s office with the signature ‘gun barrel’ backdrop, and then assigns him a weapons specialist called Bing Bing to equip him with an iPhone to help him on the field by shooting fire and shock needles. Along the way, Wong Jing continues to ‘borrow’ far better-executed ideas from elsewhere – including sonic guns from ‘Minority Report’ that Crescent uses at Haitian Technologies to capture the ‘Seed of God’, laser-beam fortified corridors from ‘Resident Evil’ that Crescent uses to secure the technology, an ‘Initial D’ race sequence down a narrow dimly-lit hillside road at night, a Jedi Knight light sabre that Agent Sampan pulls from his phone/ weapon-of-choice against Iron Hawk, and last but not least Wolverine claws that Crescent uses against Agent Hung, Louis and fellow Interpol agent Phoenix (Michelle Hu) in a mid-air finale that Wong rips from his own ‘From Vegas to Macau II’.

Most of these ‘appropriated’ jokes do not last long – largely because Wong Jing lacks the conviction and creativity to make them pop – but the running gags are not much better. One pokes fun at Louis’ mother’s (Petrina Fung) early-onset dementia, which plays out as her mistaking Louis’ buddy Amon (Wong Cho-Lam) as the family dog Meatball and mistaking a goldfish bowl for a bowl of fish soup that she has prepared for Louis. Another has Agent Sampan, Louis and Amon taking turns to charm Crescent’s head of security Sophie (Evonne Sie) in order to get an image of her iris to unlock the facility where the ‘Seed of God’ has been stored, which leads to an over-the-top sequence where Louis spits vodka laced with Tabasco sauce into Sophie’s eyes to get her to remove her contact lens. There is no doubt it is all slapstick, but Wong Jing sets his own bar too low that the comedy ends up infantile.

Character work has never been Wong Jing’s strong suite, and ‘Mission Milano’ proves no different. Lau’s Agent 119 is all over the place, suave because it fits his mug yet seemingly insecure in the face of danger. Especially incongruous is a subplot that sees his character struggling to decide whether to call his estranged wife whom he misses, an otherwise pointless addition that pays off only for the last-minute cameo of Sammi Cheng as his spouse. Xiaoming does most of the kung-fu fighting (on account possibly of Lau’s relative age), and is called on additionally just to look debonair throughout. Hu’s silver-haired Interpol spy is intriguing at the start, but proves just as flat as the two lead male characters as the movie progresses. Ditto for Amon and Louis’ other sidekick, Ka Yan (Nana Ouyang), whose supporting roles are even more paper-thin, and except for their introductory sequence where they tag-team to test Louis’ fighting skills, are pretty much non-existent.

Even by Wong Jing’s standards, ‘Mission Milano’ ranks as one of his more disposable entries – in addition to forgettable plotting and characters (which is generally true of most of his movies), there is a distinct lack of wit or humour in most of the gags. Only because the narrative is less incoherent does it fare better than Wong Jing’s last spectacular misfire, but like we said at the start, that doesn’t mean that the prolific (and some say infamous, if you loathe his ‘mo lei tau’ style) director has regained his comedic mojo. For Andy Lau’s fans in particular, his latest collaboration following ‘From Vegas to Macau III’ depletes even more of their goodwill, and we’d hope for the sake of his reputation as an actor that his next which sees him reprise one of his iconic roles Lee Rock will be a creative rebound for himself as well as for his writer-director Wong Jing (again).

(As unfunny as Wong Jing’s comedies come, this spy spoof with lame gags, sloppy writing and slapdash direction is a misfire not even its charismatic male stars can redeem) 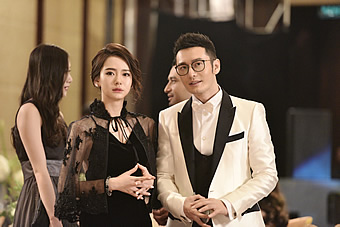 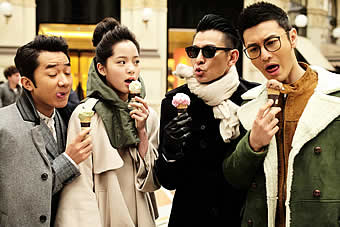