No motion picture in history has so accurately portrayed the anxiety, thrill, elation and perils of competitive motor racing as Ron Howard’s excellent ‘Rush’. A gripping drama based on the real-life rivalry between Formula One adversaries James Hunt and Niki Lauda that culminated in their history-making bout for the 1976 world championship title, it has the very rare honour of being a sports movie not just for fans of the sport itself, but a celebration of a universal need within every individual for purpose and achievement.

That need is exemplified in the two duelling, diametrically opposite individuals at the heart of the film. Hunt (played by “Thor” star Chris Hemsworth) is a British playboy who loves the game for the chance again and again to live life dangerously close to death, the epitome - if you will - of a stereotypical F1 driver who lives and drives recklessly and fearlessly. Lauda, on the other hand, is a methodical tactician, constantly assessing the odds and “looking at the big picture”, careful and calculating where Hunt is careless and cavalier.

Their approach to the game isn’t all that sets them apart; while Hunt is sexy and charismatic, Lauda is often terse and brusque. While Hunt hits the parties and downs the booze the night before and the night after every race, Lauda avoids these excesses, and cares nothing for hanging out with his team members to build camaraderie. The only thing they have in common is their family background, both racers hailing from distinguished families that did not support their racing dreams, a fact elaborated in greater detail in Hunt’s case to illustrate the conservative Viennese upbringing that likely contributed to his chilly personality.

Neophytes as we are to F1’s history, that we are able to learn so much about Hunt and Lauda is credit to Peter Morgan’s character-driven screenplay, which devotes an extraordinary amount of attention to fleshing out both personas and allowing his audience to draw out the obvious contrasts between them. This isn’t a film where the only thing that matters is what happens on the race track; rather, Howard emphasises the fundamental differences between these two men, which makes their race on the track a battle not only for glory but one stemming from their divisive personal values and beliefs - and as we learn, the reason why either one eventually develops fierce mutual respect for the other.

But before we get to that turning point, Howard recounts in largely chronological fashion their beginnings as brash newcomers in Formula Three racing and their ascent into the big F1 league. The briskly paced setup that covers Lauda’s strategic entry into the Ferrari team by his mechanical ingenuity, as well as Hunt’s more rocky start under the eccentric Lord Hesketh (Christian McKay) and subsequently Team McClaren, uses these key events to ratchet the tension between Lauda and Hunt, building up of course towards the seminal 1976 F1 racing season where their acrimony reaches its climax.

Rather than rest its sympathies with either character, Morgan leaves it to his audience to draw their own conclusions about these two men - and it is to his credit that both Hunt and Lauda come off appealing and yet alienating at different points in the film. Nowhere is this more evident than in their respective love lives - Hunt’s marriage with blond model Suzy Miller (Olivia Wilde) shows the man to be easy to fall in love but much harder to stay in love with; and despite an invigorating meet-cute with his wife-to-be Marlene (Alexandra Maria Lara) along the Italian countryside, Lauda’s subsequent courtship and early marriage years turn out largely loveless as well.

Confidently allowing the drama to take centrestage for the first half of the movie, Howard leaves much of the race action for the latter half of the movie as the 1976 season gets underway. The highlight of it all is of course the dramatic centrepiece at the Nurburgring track in Germany - also known as ‘The Graveyard’ - where Lauda will be trapped in his burning car for close to a minute and suffer third-degree burns to his head and lungs. Those who know the story will also remember that he will get back on the track an amazing 42 days later, and Howard spares no detail in showing his extraordinary tale of tenacity - including the agonizing medical procedure Lauda had to endure of vacuuming his lungs.

It all pays off extraordinarily in an exceptionally thrilling and yet deeply poignant finish set around the Fuji Speedway amidst pelting rain. A quick search online will probably tell you what happened during that race, but we advise those who yet know the story to let Howard’s film have the honour of taking you out on that breath-taking final race of the season that provides beautiful closure to the running theme of just what and how we choose our lives to be driven by. It is also by far one of the most emotionally intense cappers we have experienced this year, a perfect combination of Howard’s masterful direction, Anthony Dod Mantle’s expert cinematography (that uses compact digital cameras mounted within the cars to bring his viewer right into the heat of the action), and deft editing of hundreds of shots from various perspectives.

And yet this remains through and through a story built on two fascinating characters, which Hemsworth and Bruhl nail with adroit precision. Best known for being ‘Thor’, Hemsworth brings impressive depth to a character that could easily have been cartoonish, balancing on a very thin fine line bravado and vulnerability to rise above caricature. German actor Bruhl shines in his first Hollywood role (he’ll next be seen opposite Cumberbatch in the WikiLeaks drama ‘The Fifth Estate’), and besides exuding determination and poise at every turn, he also brings a rough charm to his character.

With ‘Rush’, Howard once again asserts himself as a maestro of smart adult-oriented entertainment built on complex but always compelling real-life characters. It easily stands out as one of his best, and the same can be said of Morgan, their second collaboration since ‘Frost/ Nixon’ paying off in a truly amazing film that is gripping at every physical turn on the track and every dramatic turn off it. Combining larger-than-life characters with white-knuckle racing thrills, ‘Rush’ Is not just one of the best sports movies we have seen, but indeed one of the very best films that you’ll see this year.

(Delivering not just white-knuckle F1 thrills but also compelling drama built around two larger-than-life racing legends, this true story about finding one's drive is gripping, poignant and exhilarating through and through) 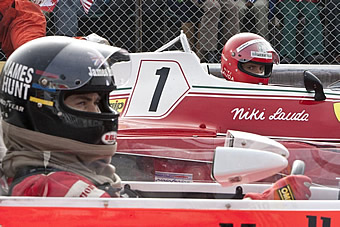 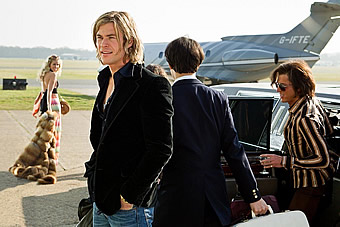