No longer just scene-stealing sideshows, the penguin quartet from the ‘Madagascar’ trilogy get their own feature-length spinoff in the palpably-titled ‘Penguins of Madagascar’. Skipper (Tom McGrath) is their natural-born leader. Kowalski (Chris Miller) is the brains of their hare-brained operations. Rico (Conrad Vernon) is too honest with his words and too eager with his flippers. And then there’s the cute and cuddly Private (Christopher Knights), whose role in the team seems only to provide the occasional amusement for Skipper, despite his sincerest attempts at trying to convince the latter that he can do more.

Eschewing the ‘lion/zebra/giraffe/hippopotamus-out-of-water’ routine of the ‘Madagascar’ films, their solo outing sees the penguins caught up in international espionage with a certain Dr Octavius Brine (John Malkovich). Turns out that the penguins and Dr Brine share some common history together at the New York Central Park Zoo – Dr Brine was the eight-legged centrepiece attraction at the Zoo named Dave until the penguins came along and stole all the limelight and attention. Faced with the same fate at every other zoo since, Dr Brine then hatched a plan to steal every single penguin from each of the zoos he’s been at and turn them into something else altogether using his ‘Medusa’ serum.

Those expecting an origin story will realise soon after a hilarious prologue set in the Antarctica that this was never meant to be that. Instead, the opening is as much background to the penguins as you’ll get, beginning with a young Skipper inciting Kowalski and Rico to break away from their flock in order to find greater purpose in their lives than simply conforming to nature. So when an egg (which will eventually hatch to bear Private) rolls along their way, they decide to give chase, with a documentary crew (bearing Werner Herzog in voiceover) in hot pursuit. A run-in with some leopard seals and an unintended explosion later, our heroes are set adrift on a bed of floating ice.

How they eventually end up in Central Park Zoo is a story for another day, as the trio of screenwriters - John Aboud, Michael Colton and Brandon Sawyer – fast-forward to the point in ‘Madagascar 3: Europe’s Most Wanted’ where they separate from Alex, Marty, Melman and Gloria by blasting off in a cannon at the circus (remember Marty’s ‘Afro Circus’ dance) and infiltrate a highly secured facility filled with gold bars in order to get at a different kind of gold – that is, a whole vending machine of golden-coloured ‘Cheesy Dibbles’ just for Private on the occasion of his birthday.

Alas, Dr Brine lies in wait for them, and their globe-trotting adventure that starts in Venice spent escaping Dr Brine’s tentacled army of octopuses spans Shanghai, Rio de Janeiro and finally New York. Each destination is an opportunity for directors Eric Darnell (who co-directed each one of the ‘Madagascar’ films) and newcomer Simon J. Smith to stage a massive action setpiece that unfolds with the kind of unpredictability and inventiveness true to the penguins’ improvisational nature. There’s no point trying to describe any of them to you, because they really are meant to dazzle and astound on a visual level; and that they do with plenty of whiz-bang energy and pizazz, the sheer gloriousness of it even more amazing when viewed in 3D.

It isn’t just the action that forces you to keep up; just as fast and furious are the witty one-liners that had us in stitches. Skipper is responsible for many of them (Dr Brine: “I see you’ve met my old zoo mates”; Skipper: “We were never mates. There was no mating.”), while Dr Brine gets most of the rest, most notably a recurring gag involving celebrity-name puns (“Nicolas, cage them!”, “Drew, Barry, more!”, “Charlize, they’re on the ray!”). Kudos to the writers for putting something in there for the adults, even though this is ostensibly a kids-driven animation.

The frenetic pacing does come at the expense of characterisation though, so besides Skipper coming into his own as a valued and significant member of the team, there isn’t much – or for that matter, anyone – else that you’ll identify with. Indeed, even lesser attention is paid to the undercover task force dubbed ‘North Wind’ that also has the mission objective of stopping Dr Brine in mind, whether the headstrong wolf leader Agent Classified (Benedict Cumberbatch), the appropriately-named explosives specialist seal Short Fuse (Ken Jeong), the cool and beautiful owl Eva (Annet Mahendru) whom Kowalski has a crush on, or the brawny polar bear Corporal (Peter Stormare) who can’t resist hugging them penguins.

That said, we hardly suspect that you or the kids will mind. ‘Penguins of Madagascar’ is made with but one intention, and that is as a fast-paced, quick-witted, high-energy action adventure to thrill, entertain and delight its audience. On each and every one of those counts, it succeeds tremendously, and we dare say that we had more outright fun in this movie than in any other animation we’ve seen this year. If there’s one thing we’ve learnt from this solo outing, it’s that ‘Madagascar’ has gone the way of the penguins.

(Everything you’ve loved about the penguins and more – this fast-paced, witty, and visually dazzling action adventure will have you in rapture)

THE PENGUINS OF MADAGASCAR OPERATION PENGUIN TAKEOVER (2010)
Back 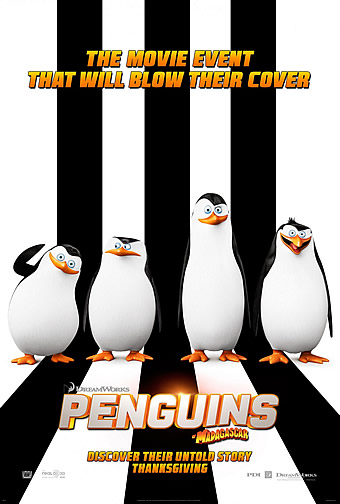 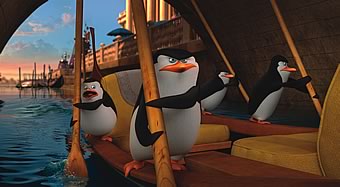 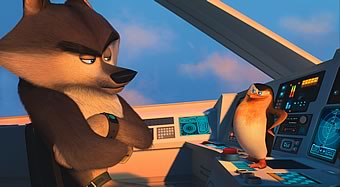 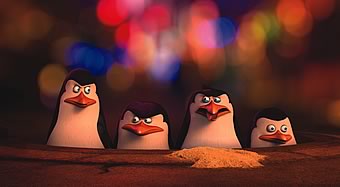