Synopsis:  It was never just a game. Inviting audiences again into the lore of the spirit board, Ouija: Origin of Evil tells a terrifying new tale as the follow-up to 2014’s sleeper hit that opened at number one. In 1965 Los Angeles, a widowed mother and her two daughters add a new stunt to bolster their séance scam business and unwittingly invite authentic evil into their home. When the youngest daughter is overtaken by the merciless spirit, this small family confronts unthinkable fears to save her and send her possessor back to the other side.

Unlike the obvious doll in The Conjuring, Ouija: Origin of Evil’s child lead Doris Zander, played by the beguiling Lulu Wilson, is truly a haunting vessel for evil. When perky blonde bob and fair-faced child turns to you with milky eyeballs and a gaping mouth, there’s no reason not to recoil in fear. Director Mike Flanagan’s star is on the rise as he steers clear of too many Hollywood cliches to generate some ghoulish good times.

Alice Zander (Elizabeth Reaser) is the struggling single mum working as the local town’s medium. Thing is, she didn’t exactly inherit the family gift and so she resorts to mechanics and theatrics to deliver comfort to ailing hearts. On the hunt for a new performance tool, she picked up the Ouija board. Coincidentally, this is when her youngest, Doris, starts displaying genuine gifts of channeling. Thrilled by the turn of events, Alice conveniently brushes aside the source much to the chagrin of her elder daughter Lina (Annalise Basso).

No surprise when things turn much darker as the family finds out that the messages were not coming from benign spirits. Worse still when they realise Doris might not be herself anymore. So with the possession comes our kindly priest. Father Tom Hogan (Henry Thomas) assists the family through the investigations, leading to a culminating exodus that routes itself to it’s later story, 2014’s Ouija.

The setting in 1965 is perfect, as the era of both innocence and decadence. This throwback in style is convincing, paired well with Michael Fimognari’s understated but effective camera work. Flanagan manages to retain this nostalgic formula in scares too, keeping things simple and straightforward. It’s never dull, worked with an even pacing, with equal measure of build-ups and jump scares, body circusy and haunting images to keep its genre.

Flanagan puts his prize money on the cherubic Wilson, who rewards him with an unnerving performance as possessed child. The child actress steals the scenes she’s in (possessed or not), with none of the robotic stiffness typical in such characters. Her gullibility, when twisted by the malevolent forces, have an unerving effect. Her stares and subtle face twitches are creeping as she hides the army of evil she’s channeling. However, a note to Mike, once you’ve seen the demonic face effect, it exponentially loses its effect in subsequent appearances.

Equally captivating is the firmly present Annalise, who convincingly roots us in her paranoia, all displayed pleadingly through her brilliant blue-green eyes. As the grounded elder daughter, she is the logic mill of the family and responsible for finally getting help. Not so persuasive was mentioned help, as Father Thomas, with his mutterings and dodderings, delivers a flat performance. The only exception was an anticipated scene, where he goes head-to-head with Doris, testing her at the board. The editing for what happens after, made for a tense and thrilling watch.

Ouija: Origin of Evil is still a good year-end horror, and that rare film that will earn the title of it being a sequel that’s better than the original. With a strong cast and styling, this sophomore effort for the series is spelling out success - just don’t spoil it with a third installment.

(Hasbro’s latest venture has the right hands on deck and got steered well. The planchet on this board will slide quickly to the YES) 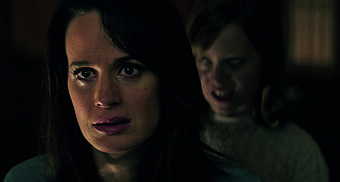