Synopsis: Sometimes the man you don’t notice is the most dangerous of all. Emmy winner Bob Odenkirk (Better Call Saul, The Post, Nebraska) stars as Hutch Mansell, an underestimated and overlooked dad and husband, taking life’s indignities on the chin and never pushing back. A nobody. When two thieves break into his suburban home one night, Hutch declines to defend himself or his family, hoping to prevent serious violence. His teenage son, Blake (Gage Munroe, The Shack), is disappointed in him and his wife, Becca (Connie Nielsen, Wonder Woman), seems to pull only further away. The aftermath of the incident strikes a match to Hutch’s long-simmering rage, triggering dormant instincts and propelling him on a brutal path that will surface dark secrets and lethal skills. In a barrage of fists, gunfire and squealing tires, Hutch must save his family from a dangerous adversary (famed Russian actor Aleksey Serebryakov, Amazon’s McMafia)—and ensure that he will never be underestimated as a nobody again.

As embarrassed as we are to say this, we had plenty of fun watching this utterly violent thriller that sees Bob Odenkirk from the Emmy award-winning series ‘Better Call Saul’ play a mild-mannered accountant who morphs into someone quite very different after a pair of amateur burglars break into his house and cause his young daughter (Paisley Cadorath) to lose her kitty-cat bracelet.

Odenkirk’s Everyman hero Hutch Mansell has been compared to both John Wick and Bryan Mills (aka Liam Neeson’s character in the ‘Taken’ series), but director Ilya Naishuller and writer Derek Kolstad (who also wrote the first ‘John Wick’ movie) give more than enough texture to their supposedly nondescript character here to make him stand apart from either of his two genre predecessors.

For one, unlike John, Hutch is a family man with a wife and two kids, even though his well-kept real estate agent-wife Becca (Connie Nielsen) doesn’t seem to give him much regard in the household anymore, except when he fails to bring out the trash to the curb on time. For another, unlike Mills, he is a lot less self-controlled when unleashed, most prominently when he decides to stand up for a young woman terrorised on a public bus by a bunch of drunk, rowdy Russian thugs.

And to his credit, Odenkirk makes the character very much his own with a wry, nebbish demeanour. Unlike John or Mills, Hutch isn’t imposing by any measure; instead, he is by most counts unremarkable and self-effacing, even while he lets loose his particular set of skills that he has clearly buried from years of being someone entirely different from his current persona. What stands out is Hutch’s wryness, which he lets his enemies have plenty of before disposing of them in brutally efficient ways.

Like Hutch, ‘Nobody’ triumphs on sly humour; not parody mind you, but tongue-in-cheek humour that brings the right touch of levity to lighten up the brutal excesses. There are some well-placed moments of absurdity in between the fighting. There are also some witty one-liners that Odenkirk delivers with perfect timing. And then there are the brilliantly constructed supporting players, including the flamboyant Russian mobster Yulian (Alexey Serebryakov) who loves to work the crowd at his own nightclub, Hutch’s father David (Christopher Lloyd) who lives in a retirement home but clearly has a storied past, and Hutch’s brother Harry (RZA) who serves as his confidant and adviser over the radio.

Undeniably, the plotting feels familiar enough for fans of ‘John Wick’, as Kolstad recycles similar elements whether is it Russian mobsters, shadowy associates assuming choice disguises in plain sight (in this case, someone who goes by the name of ‘The Barber’) or the inclusion of pets (a cat, if you must know); but Naishuller brings his own distinctly offbeat style to the movie, with some vividly choreographed action sequences set to a wacko soundtrack full of ironically selected classics like ‘You’ll Never Walk Alone‘, ‘What A Wonderful World’ and ‘The Impossible Dream’. It’s a blast all right, and Naishuller, a native Russian himself, makes sure that the ride is as entertaining as it gets.

In fact, we dare say that ‘Nobody’ is the most fun we’ve had in the cinema for quite some time – and that’s not just because of the delays in the release calendar wrought by the COVID-19 pandemic. It takes a certain panache to compose such a vigorously  thrilling action movie, so kudos to Naishuller and Odenkirk for a lean, mean ride full of visceral violence and biting humour. Not surprisingly, the ending leaves room for this to be a franchise starter, and believe you me, you’ll be left wanting to see what comes next. 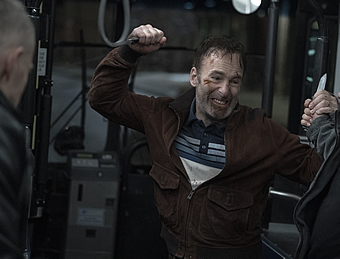 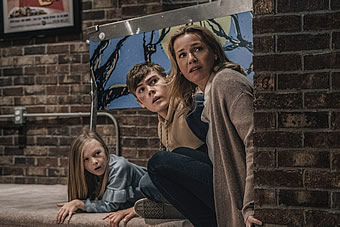