Synopsis: In Alexander Payne’s “Nebraska” a father and son steer the American road comedy into a vanishing Midwest on the trail of a dubious fortune – and in search of an understanding of each other that once seemed impossible. This is the story of the Grant family of Hawthorne, Nebraska. Now transplanted to Billings, Montana, stubborn, taciturn Woody (Bruce Dern in a role that won Best Actor at the Cannes Film Festival) is well past his prime -- such as it ever was -- and possibly his usefulness, but he believes he’s got one last shot at mattering: a notice that he’s the lucky winner of a million-dollar sweepstakes. To claim his fortune, Woody insists he must quickly get to the sweepstakes company’s office in Lincoln, Nebraska – a 750-mile journey that seems unlikely given that he can barely shuffle down the road a few blocks, at least not without stopping for a drink. Worried for his father’s state of mind, it falls to Woody’s reluctant, baffled son David (Will Forte) to accompany him on a trip that seems hilariously futile on the surface. Yet, their odd journey becomes a kind of modern family odyssey. When Woody and David make a pit-stop in their hometown of Hawthorne – with the Grant’s tart-tongued matriarch (June Squibb, “About Schmidt”) and anchor-man son (Bob Odenkirk, “Breaking Bad”) joining them – word of Woody’s fortune makes him, momentarily, a returning hero. Then it brings out the vultures. But it also opens a view into the unseen lives of David’s parents and a past more alive than he ever imagined. Shot in a black and white Cinemascope that mirrors the dusky beauty of small-town USA and the film’s high contrasts of humor and heartbreak, the film gives comic consideration to questions of family roots and family riddles, delusion and dignity, self-worth and the quiet yearning for a dash of salvation.

This writer wasn’t exactly sure he would be comfortable watching Alexander Payne’s latest work. Nope, in case you are wondering, this 115 minute film isn’t a horror flick. Neither is it slapped with a “Disturbing Scenes” consumer advice from our friends at the regulatory board. It’s just that, at this columnist’s age, it’s about time he come to terms with certain issues in his life, and some things may, well, to put it simply, be a little too close to heart.

You see, Payne’s film puts an ageing, near senile father in the spotlight. Alongside him is an estranged son who hasn’t made it big (by society’s standards, at least) in life. The alcoholic father receives a coupon which has him believing that he is going to win a million dollar mega sweepstakes marketing prize. Thing is, he has to travel all the way from Montanato Nebraska (we aren’t exactly sure how far away it is, but let’s just say by local standards, it’s not a MRT ride away) to claim it. So, we have the father and son duo on a road trip, in glourious black and white, no less.

Do not be mistaken that this reviewer’s father is plagued by old age, senility and booze related problems. What Payne, together with writer Bob Nelson have done here is to create a character that somehow embodies that nagging issue all of us will eventually face – elderly parents. This one lifetime we have, nothing comes close when it comes to parent child dynamics. It’s only natural that some of us have it better (read: a rosier happy family portrait) than the others, but essentially, at the end of the day, it is a metaphorical road trip similar to the one in the movie that we have to take with the folks that brought us life.

While we are fully aware that veteran Bruce Dern will probably not be a trophy darling come the award season (he did snag the Best Actor award at the 2013 Cannes Film Festival), we are taking our hats off this 77 year old dude. The Chicagoborn actor, who was last seen in Quentin Tarantino’s Django Unchained, is heartbreakingly perfect as the dazed and helpless man whose life story begin to unravel when he reaches his hometown Hawthorne. Scenes of him shuffling on the streets, driven by one determined goal of claiming his one million dollars, is both tear jerking and side splitting to watch. With the strands of fluffed out white hair swaying in the breeze, Dern’s portrayal of a true to life senior citizen is one of the most affecting we’ve seen in cinema.

The cast also includes the scene stealing June Squibb (who Jack Nicholson’s wife in Payne’s other geriatric film in 2002’s About Schmidt), who plays Dern’s visibly annoyed wife, and Saturday Night Live alums Will Forte and Bob Odenkirk. Forte is one to watch here, unassumingly playing Dern’s son who, under circumstances, get to know his father’s and ultimately, his place in life.

The highly recommended film may be like Payne’s Sideways (2004) because it’s a road trip movie, or is similar to The Descendants (2011) as there is a character trying to put pieces of someone’s life together, but this is the American auteur’s best work to date yet, simply because it touches an issue so close to heart, you’d walk out of the cinema wanting to be a better person.

(A heartbreakingly beautiful piece of work which explores the finer moments of family, roots and essentially, life) 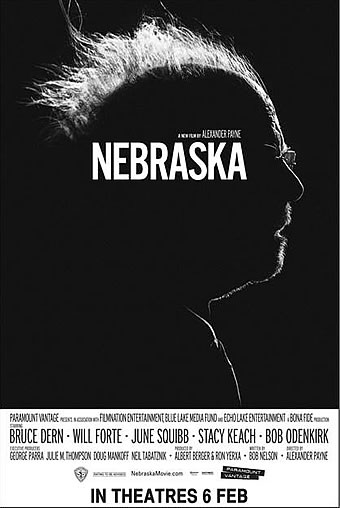