Synopsis: Everybody’s welcome at Ma’s. But good luck getting home safe. Oscar ® winner Octavia Spencer stars as Sue Ann, a loner who keeps to herself in her quiet Ohio town. One day, she is asked by Maggie, a new teenager in town (Diana Silvers, Glass), to buy some booze for her and her friends, and Sue Ann sees the chance to make some uns uspecting, if younger, friends of her own. She offers the kids the chance to avoid drinking and driving by hanging out in the basement of her home. But there are some h ouse rules: One of the kids has to stay sober. Don’t curse. Never go upstairs. And call her “Ma.” But as Ma’s hospitality starts to curdle into obsession, what began as a teenage dream turns into a terrorizing nightmare, and Ma’s place goes from the best place in town to the worst place on earth.

If you know of Oscar winner Octavia Spencer, you’re probably wondering what she is doing in a horror thriller like this. Notwithstanding that the titular role was written specifically with her in mind, little in Spencer’s filmography suggests that the star of such prestige pictures as ‘The Help’, Hidden Figures’ and ‘The Shape of Water’ would agree to play a middle-aged maladjusted psychopath who develops an obsession with a bunch of high-school kids and ends up tormenting them in her basement. Oh yes, despite some attempt at socio-political commentary (read: it is no coincidence that she is ‘black’ amidst a predominantly ‘white’ cast), this is ultimately still an exploitation horror, albeit one is never quite as gonzo as it needs to be.

The setting is a depressing Ohio town in present day, where 16-year-old teenager Maggie (Diana Silvers) has just moved to with her newly divorced mother Erica (Juliette Lewis). Luckily for her, Maggie is invited to hang out with the cool kids at school from day one, instantly befriending the brassy Haley (McKaley Miller) and her peeps. They first make acquaintance with Spencer’s character Sue Ann when they go looking for an adult to purchase alcohol for their evening hangout, and although the veterinarian’s aide demurs at the start, Sue Ann eventually relents and indulges their request. Not only does she fulfil their liquor order, Sue Ann offers to open up her basement so they won’t get caught for underaged drinking.

Except for Maggie, none of the other kids do not find Sue Ann’s generosity even borderline suspicious; yet, as you can guess, it only gets creepier from that point on. Besides converting her basement into a permanent spot for alcohol-soaked parties, Sue Ann takes to dropping in at school to visit Maggie and her friends, as well as serial texting them whenever she perceives that they are slighting her. Ever the more vigilant one, Maggie is further troubled by the odd thumps she hears from the main house itself that Sue Ann has warned is strictly off-limits to the kids, and also the pair of earrings her mother had given to her which goes missing the morning after one of those parties at Sue Ann’s place.

Through on-and-off flashbacks to her own high-school experience, we slowly learn of Sue Ann’s backstory, made up not just of traumatic episodes of verbal bullying but even a racialised moment of sexual humiliation. It is sobering stuff to say the least, but in the hands of director Tate Taylor and writer Scotty Landes, also intended as justification for her disturbing acts later on. Yet these episodes strain credulity to say the least, and rather than stirring sympathy for Sue Ann, leave us cringing. It doesn’t help that Spencer dials in a performance that is too restrained for its own good, failing therefore to convince how aggrieved and repressed Sue Ann needs to feel in order for us to buy into her motivation for going batshit crazy in the last third of the movie.

Indeed, like we said at the start, as much as the filmmakers inject the movie with racial overtones and psychological undertones, ‘Ma’ is still very much shlock horror. How else would you describe Sue Ann – as one of the much-touted promotional stills of the movie proudly display – sewing Haley’s mouth shut, painting one of her friends’ face white and attaching dog collars around each one of their necks? What about the fact that she uses animal tranquiliser on the person who had humiliated her, tying him naked to the bed and infusing dog blood into his veins? Even as Spencer tries to elevate the material, there is no disguising that it is no more than a B-movie exercise in amped-up exploitation.

And it is precisely on that level that ‘Ma’ disappoints, because unlike say ‘Get Out’, it hardly develops its premise compellingly enough to elevate itself into politically-charged horror. ‘Ma’ fails to deliver a visceral kick out of Sue Ann getting her comeuppance, partly because Spencer is too measured and partly because Taylor is too insipid a director to tackle a movie of this nature. Given how it isn’t violent or gory enough, ‘Ma’ is really just boring, ambling along for far too long before deciding in its finale to change gears into torture porn. As much as we respect Spencer as an actress, we cannot say we liked ‘Ma’ any bit better just cause she is in it, and we suspect for both her and Taylor’s sake, they should just stay in safer territory (like ‘The Help’) the next time they decide to team up again.

(Not nearly as gonzo as it needs to be, this feeble attempt at turning shlock horror into politically-charged psychological horror - like 'Get Out' - ultimately falls flat) 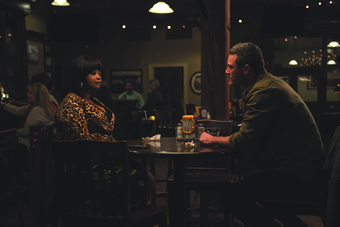