Synopsis:  As a small-town girl catapults from underground video sensation to global superstar, she and her three sisters begin a one-in-a-million journey of discovering that some talents are too special to keep hidden. In Universal Pictures’ Jem and the Holograms, four aspiring musicians will take the world by storm when they see that the key to creating your own destiny lies in finding your own voice.

The struggle with self-identity and the eternal question of ‘who am I?’ is definitely nothing new. Just recently, there’s also quite a stir concerning the Australian teen model / influencer Essena O’Neill’s quitting of Instagram. Social media is “contrived perfection made to get attention” and “not real” says the teen. That’s almost exactly the struggle that Jem (or Jerrica) faced. Just that Jem had a different starting point and motivation for putting on that alternate persona…

The story follows the life of Jerrica (played by Aubrey Pepples), who lives with her foster parent and siblings. She’s got a big passion for singing and song writing. Jerrica experimented and recorded a song in the identity of Jem, a pink haired funky-looking young lady. One of her sisters then uploaded it onto YouTube and it propelled her to popularity. However, Jerrica began to feel odd because now majority of the people only know only ‘Jem’. An invitation to be signed as a label artiste also began her adventure of uncovering the secret behind the robot her late dad left behind.

Young actress Aubrey Pepples is commendable with her portrayal of Jem. She brought out the Jem’s journey of self-discovery while experiencing the turbulence in life – her vexations, insecurities and sadness. Her emotional depictions albeit not as mature as veteran actors or actresses, was adequate to emote and convey messages. Other supporting cast weren’t as outstanding, but did enough to support the story.

In terms of the music and songs, a couple of them were quite bubbly and easy to catch. It does good to bring out the youthfulness and energy of the movie. However, while the songs were largely good, the lip-syncing and sound editing of the movie were not as well done. Production-wise, there were also several odd angled amateur looking cuts that distract more than intertwine the story well.

The storyline continues with Jem and her sisters eventually uncovering a hologram (hence the name of the movie). Unfortunately, the story really held no strong objective and was lacking depth. Given it’s a movie targeted at children and teens, it also did not serve to entertain enough. Therefore, that lack of engagement will lose audience’s attention.

As like all perfect worlds, problems will always get resolved at the end which makes everyone nice and happy. That sums up the ending of the Jem and the Holograms, which is well, rather clichéd. Although the movie did impart some good feels, overall it lacked dynamism and vibrancy. 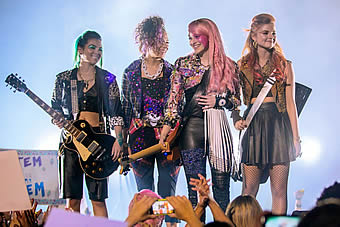 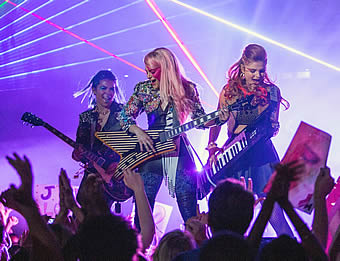 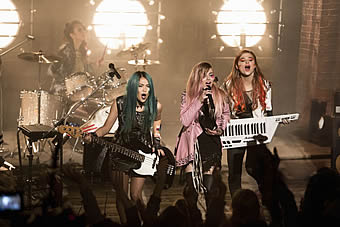