Synopsis: "Justin Bieber: Never Say Never" is the inspiring true story and rare inside look at the rise of Justin from street performer in the small town of Stratford, Ontario to internet phenomenon to global super star culminating with a dream sold out show at the famed Madison Square Garden in 3-D.

I suppose having this film postponed to a later screening date relative to the USA's will allow those who haven't got tickets to Justin Bieber's My World Concert in Singapore on 19th April to have this as an alternative since there's a 3D version to get up close and personal, or for Bieliebers to double dip and experience their teenage sensation of a pop star all over again. Frankly I'm a generation apart to appreciate the hype, but after sitting through this, Bieber has got my new found respect.

This boy from Canada is truly talented, with the many childhood videos to attest to his building of ability in handling multiple musical instruments and that bout of showmanship, but ultimately it's that child like voice which caught the attention of Scooter Braun and Usher, and the rest, as they say, is history. What is made even more sensational is the power of the internet and social media networks, where stars can be discovered through non-conventional channels, and then marketed in similar fashion especially in the spreading of word of mouth, and the ability for the star to interact with fans en masse. You may put his success squarely at the marketing machinery behind him, but surely this documentary will likely change your perception since the bottom line is, if you're not a consummate performer, you cannot hold court like how this teenager is doing.

Directed by Jon Chu of Step Up 3D, Justin Bieber: Never Say Never is an addition to the growing number of concert films in the 3D format, but it's not all just song and dance routines per se, as the narrative tells of the meteoric rise of a nobody to a somebody in the world of music, where we get talking heads styled interviews with his parents and grandparents, and a sneak peek into the private life of a now public figure, where everywhere he goes he cannot escape the odd stare and the cameras that get whipped out to record his every move, or fans who gather around where he goes for a natural pit stop. While we get to hear from plenty of fans and friends to try and get a better perspective to the entire frenzy behind Bieber-mania - he can stop traffic - this film ultimately lets down in not allowing the audience to dig into more intimate moments with Justin one on one through interviews.

The visuals are split down the middle into two broad sections, with the first being clips from his childhood galore in reminding us how modest his upbringing was, and to chronicle the Justin Bieber story of all his 16 years. Centered around 10 days before his sold out (in 22 minutes) concert at New York's Madison Square Garden, we get to understand the entire machinery behind the tour, and how his vocals are supporting an entire ecosystem of professionals and craftsmen who become his close family as they bring Bieber to various parts of North America in his My World tour, and we get behind the scenes glimpses of his life on the road, which I thought some aspects still showed he's a typical precocious teenager, immature at times.

Then there's the other section that is where the 3D is centered around - his concert performance at Madison Square Garden as he goes through hit after hit such as One Less Lonely Girl, Baby and the titular Never Say Never, amongst others. Releasing only one studio album thus far would severely limit the number of songs that can be featured until he runs out of something to sing, but this is compensated by the many guest appearances of the likes of Ludacris, Usher, Miley Cyrus even who had her own 3D concert feature film made, and Jaden Smith as they co-perform and share the same stage. I'm not sure if these appearances will be replicated in the concert in Singapore, but my money is on that it's likely not.

At best this is a good preview of what anyone can expect from his Singapore leg of the tour - imagine every fan wanting to go up on stage to be serenaded during One Less Lonely Girl - and for some without tickets to perhaps get complimentary ones (good seats by the way) thrown in their direction by the tour team if they're found hanging around at the right areas. A definite appeal to Bieber fans, and for those who are not, this is likely to change your mind that he's more than just a pretty face with floppy hair, but a talented performer found at the right place and at the right time.

(If you haven't got tickets to the concert, then this is your alternative) 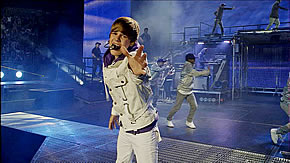 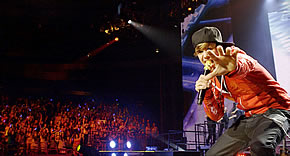 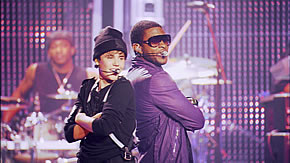