Synopsis: He Yuming (Huang Xiaoming) is a hard-working car salesman; all he dreams of is to propose to the love of his life, Yan Yan (Sarah Li) who is supposed to come back from the US soon. However all of sudden, she breaks up with him on the phone. To fly to Los Angeles and win back Yan Yan, Xiaoming joins a “Hollywood Adventures” tourist group and unwillingly joins forces with fellow traveler Fang Dawei (Tong Dawei), who sees life through the lens of the movies, and reluctant travel guide, Wei Wei (Zhao Wei), a beautiful woman who is everything Xiaoming is not. The trio then goes on an epic cross-cultural adventure where anything is possible in Hollywood.

You probably are guilty of this as we are – poking fun at, or worse, making mean comments about the Mainland Chinese. But one thing we’ll have you know: Chinais a force to be reckoned with. How else would you explain the number of foreign investors flocking to China? If we were to talk context, remember the large role Chinaplayed in Michael Bay’s Transformers: Age of Extinction, the latest installation in the shamelessly money making franchise?

The latest example we have is this Timothy Kendall helmed action comedy starring Zhao Wei, Huang Xiaoming and Tong Dawei. Those of you who are familiar with Chinese showbiz would know that these three are big names in the entertainment industry. What does this all translate to? Moolah, of course.

Huang plays a by the book man who scoots off to Los Angelesafter being dumped by his girlfriend over the phone, hoping to win her back. He ends up on the titular Hollywood Adventures honeymoon tour led by an able guide (Zhao), and being constantly harassed by a chatty tour mate (Tong). The trio’s misadventures begin when they cross paths with criminals trafficking rhino horn powder.

Kendall’s debut feature almost crosses the line of caricaturing clichéd Chinese stereotypes (the ‘ching cheong’ characteristics and badly accented English spouted by Tong in particular are too glaring to be missed), but if you are able to see beyond the sometimes predictably tired humour and soak in the energy of a story taking place in Hollywood, where anything is possible, you’ll enjoy the ride and appreciate the filmmakers’ possible intent of poking fun at American pop culture.

The draw of this 115 minute movie is definitely its leads. Zhao (12 Golden Ducks, Dearest), who also took on the role of the movie’s producer, has a natural chemistry with Huang (The Crossing, The White Haired Witch of Lunar Kingdom). The two have a long time friendship dating back to their schooling days in Beijing Film Academy, and one does hope that the two are couple in real life (Zhao is married to businessman Huang Youlong; Huang is engaged to actress Angelababy).

The actor you’ll be rooting for is Tong (Meet Miss Anxiety, American Dreams in China). Playing the earnest but talkative member of the motley crew, he displays an earnest personality that you can’t bear to brush off. When he makes countless references to Hollywoodmovies (the character is a walking IMDB chockfull of movie related information), you’ll want this dude to be your best friend when you’re down and out. You know you’ll smile when someone reaches out to you and says “Come with me if you want to live”, or cheer you up with his rendition of “ET phone home”.

Elsewhere, there are delightful cameos, courtesy of Sung Kang (who’s probably on board because of his involvement in producer Justin Lin’s Fast and furious franchise), whom Tong thinks looks like street racer Han; and Robert Patrick, who puts on his best scowl as T-1000 from Terminator: Judgment Day.

Put everything in the mix, and then add a number of car chases, explosions and hilarious scenarios. The result is an enjoyable action comedy that’s not short on laughs.

(You’ll enjoy your ride with this motley crew through Hollywood, where impossible but fun things happen) 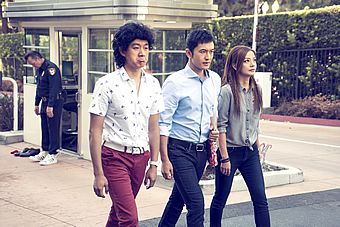