Synopsis: Four years ago, Qi Jia’s beloved college boyfriend Liu Chong plans to work in Beijing, while Qi rather stays in her hometown city. At their graduation ceremony, Qi proposes to Liu in the public, only to be rejected immediately - that was the end of their love story. After their graduation, Qi was so passionate toward her new life and approved the ‘flat-share’ request by her schoolmate, Yuan Xiao’ou who was homeless at that time. Qi had never heard from Liu Chong after then until she got his wedding invitation two years later, she was devastated….

How awkward, to have this writer review a movie about menopause. The last he checked, this natural change which typically occurs in females during their late 40s or 50s is defined as the cessation of a woman’s reproductive ability. It signals the end of the fertile phase of a woman’s life. While this reviewer is no expert when it comes to biological conditions, he knows better than to step into unfamiliar territories and make insensitive sexist comments which could bring about the wrath of countless women out there.

This Chinese romantic movie may speak to female viewers better, but this scumbag from the male species is having a little trouble understanding what the fuss is all about with menopause. Fortunately, the comedy directed by South Korean filmmaker Kwak Jae Young stars Zhou Xun, one of the best actresses in the industry.

Zhou plays QI Jia, a 26 year old girl who thinks she is suffering from premature menopause – no thanks to her perpetual depression over being dumped by her boyfriend years earlier. Along comes Tong Dawei’s Yuan Xiao Ou, who shows up homeless at Qi Jia’s flat. Years go by, and the two become, well, closer. Ten minutes into the 99 minute movie, you know how this is going to end.

Kwak, best known for his 2001 work My Sassy Girl, has made the somewhat funny but still incomparable Windstruck (2004) and Cyborg She (2008). And like the many business minded filmmakers before him, the capable director decides to venture into the all mighty and powerful market known as China. With the number of investors and big names on board, it is unsurprising to see Zhou and Tong taking on the lead roles, headlining this watchable but conventional romantic comedy.

Zhou shines as usual (okay, so this writer may be a little biased ever since he was smitten by the actress’s performance in Peter Chan’s Perhaps Love) – you have to give it to the 40 year old actress for pulling off a character that is 26 years old. You know what? The Zhejiang born beauty actually looks the part, donning a wedding dress to propose to her boyfriend at a university graduation, pouting and creating a scene at a roadside food stall, staring into blank space while sitting on a window sill: there are numerous scenes for the capable actress to show viewers why she is one of the better artistes from showbiz.

Zhou’s co star Tong fares well as the very likable dude who is so idealistic in the romance department, girls would want someone like him to bring home for parental approval. The two stars share wonderful chemistry on screen, playing off each other’s characters with ease. The pairing would have been less watchable if the casting was miscalculated.

Kwak conveniently transfers his direction in romantic comedies to this production. While it doesn’t pull off any surprises for you to sit up in awe, it is a functional movie that serves a predictable dose of laughs. We know this movie deals with menopause, but the lack of emotional connectedness still makes it difficult for this writer to understand what his female friends are about to go through when they approach the supposedly scary stage called midlife. 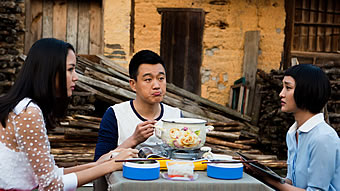 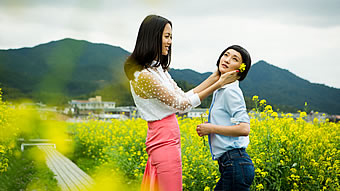