Synopsis: Blumhouse (Split, Get Out, Whiplash) produces an original and inventive rewinding thriller in Happy Death Day, in which a college student (Jessica Rothe, La La Land) relives the day of her murder with both its unexceptional details and terrifying end until she discovers her killer’s identity.

Not since ‘Scream’ have we seen such a clever reinvention of the teen slasher genre as ‘Happy Death Day’, which also puts a fresh spin on the time-loop premise best associated with the classic 1993 Bill Murray comedy ‘Groundhog Day’.

The conceit is simple yet ingenious – a sorority party girl named Tree (Jessica Rothe) is doomed to die over and over again on her birthday until she figures out just who is behind the pig-baby mask that has been trying to kill her and why. Contrary to expectation, Tree isn’t a likeable character we’d love to root for; in fact, she’s pretty mean and self-involved. She refuses to answer the texts of a guy who had brought her out to Subway on their first day (‘It’s not as if you have a foot-long,” she snarks). She doesn’t care that her roommate Lori (Ruby Modine) has baked her a cupcake for her birthday, dumping it straight into the trash bin in front of Lori after blowing out the candle on top. She is hardly bothered that she is sleeping with her professor (Charles Aitken) who is already married. And to top it off, she indifferently rejects calls from her father whom she has grown estranged from since her mother’s death three years ago. It isn’t any surprise that she will come to realise with resurrection after resurrection just how callous and egoistical she’s been, and come to change her ways for the better by the time she finally learns how to alter her destiny.

But to be sure, this isn’t intended to be some morality tale; rather, director Christopher Landon has fashioned a snappy horror comedy that aims to be amusing and frightening at the same time, though it does the former much better than it does the latter.

A large part of the laughs come from how Landon and writer Scott Lobdell tinkle with the details that mark the start of each replay – waking up at the sound of the bell of the clock tower in the dorm room of a sweet curly-haired male stranger Carter (Israel Broussard), the Asian hipster who bursts into the room talking about her ‘fine vagine’, the global-warming activist who tries collecting her signature in the quadrangle, and last but not least her brief make-out with her Brit lecturer in his office just before his wife comes knocking unannounced – as well as the precautions she takes (albeit unsuccessfully) each time to avoid dying all over again. In particular, the latter is opportunity to revisit genre conventions of where the female typically meets her death (think: her bedroom; the room where she is about to make out with a guy; along a deserted road where she is just pulled over by a highway cop; and not forgetting the dimly lit corridors of a hospital).

Much of the credit for the humour also belongs to the blonde-haired blue-eyed presence of Rothe, who plays a spunky charm to her anti-heroine role. Rothe holds the screen from start to finish with her inexhaustible appeal, and has great chemistry with Broussard especially in the latter half of the movie where they team up to narrow down the list of suspects.

On the other hand, those looking to be scared will probably find themselves disappointed, as the deaths themselves are staged in almost suspense-free settings. Granted, the sight of a killer in a pig-baby mask is creepy, but Langdon seems to be more interested in getting to the start of the next loop than to ensure that each loop ends with a bloody high. Slightly more engaging is the identity of the killer, who in ‘Scream’-like style, could be anyone that Tree had contact with during the course of the day – although it should be said that the film has more than a couple of red herrings, and therefore more than a few false endings before Tree successfully escapes her time maze.

Seeing how the teen slasher genre had literally been done to death, ‘Happy Death Day’ is a faithful addition that ticks all the necessary tropes with a refreshing ‘Groundhog Day’ variation. It is most significantly a lot of fun, marked by a cheeky self-awareness that isn’t afraid to acknowledge its references and (obvious) sources of inspiration. And as a release intended for some Halloween merriment, it is the perfect throwaway entertainment for a similarly throwaway occasion.

('Scream' meets 'Groundhog Day' in this refreshing spin on the time-worn teen slasher genre, which is also perfect entertainment for some Halloween merriment) 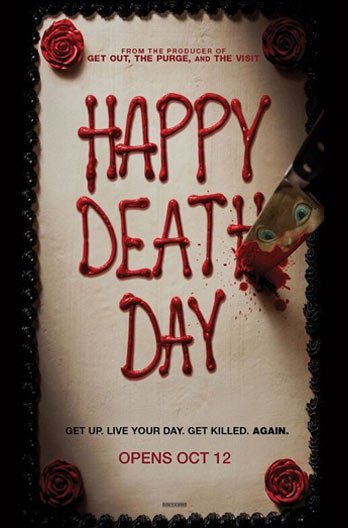