Synopsis: Marvel’s motormouth mercenary is back! Bigger, better and occasionally more pantless than ever before. When a super soldier arrives on a murderous mission, Deadpool is forced to think about friendship, family and what it really means to be a hero - all while kicking 50 shades of ass. Because, sometimes, to do the right thing you need to fight dirty.

Let us get this out of the way: we love Deadpool 2 more than Avengers: Infinity War.

While these characters had their origins on the colourful pages of Marvel comics, the foul mouthed merc with a mouth is definitely a more fun dude than the sometimes self righteous superheroes in the other cinematic universe. Yes, while Deadpool may not be what you call an ‘A grade’ hero (he is an anti hero, not a superhero), but we are pretty sure we’d want to hang out with him more than the Avengers.

In this sequel to the 2016 hit produced by Fox (no, Disney hasn’t owned everything – yet), the red suited mercenary is faced with a personal loss that leaves him dejected. Before he becomes all emotional, the screenwriters have him meet a mutant boy who shoots fire from his hands. Enter Cable, a super soldier from the future who is hell bent on killing the boy. Deadpool then gets his act together and forms an X Force team to save the boy.

Why X Force? Because ‘X Men’ has been taken, and also because, ahem, that name is not gender neutral.

Yup, this is the kind of humour you can expect from the 120 minute movie directed by David Leitch (Atomic Blonde). If you are a fan of the first movie, you would already know what to expect. But trust us, this instalment is wackier, fouler and bloodier. If this is your kind of entertainment, you will lap it up in no time.

From the get go, Deadpool references a certain clawed superhero and how the hairy dude had an upper hand. He then pulls a rather unexpected stunt and the story heads towards a direction we didn’t see coming. There are tons of pop culture references and jibes at other movie franchises. The jokes are genuinely funny - one can only imagine how much fun the writers had putting this together.

Amidst the laughs, there are also some nice heartwarming moments. Didn’t expect that from Deadpool? It’s nice to note that he is not out to save the world. Like us mere mortals, he just wants to make today better than yesterday.

Of course, it helps that the titular character is played Ryan Reynolds, a charming actor himself. Nothing is spared from being poked fun at. From the Canadian celebrity’s country of origin to the bad choice of movie roles he has taken on, there isn’t a single boring moment during the movie’s two hour runtime. Just as you thought Josh Brolin has done a great job playing Thanos, the MVP of this summer blockbuster season delivers again by portraying the anguished Cable.

Without giving too much away, we can only advise you to keep your eyes peeled for Easter eggs and cameo appearances. In fact, the highly entertaining movie is worth a second trip to the cinema (yay for the movie studio!) just to catch things you may have missed the first time.

(Deadpool is back, and he has lots more wacky and foul fun in store for you!) 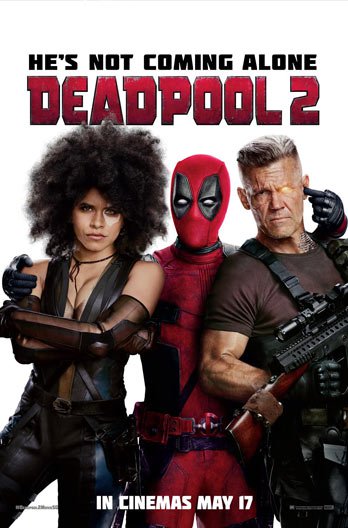