Synopsis: Somewhere in the North Atlantic, late 1945. A life raft adrift at sea, and in it, the survivors of a torpedoed hospital ship. With no food, water, or shelter, all seems lost - until an abandoned German minesweeper drifts ominously towards them, giving them one last chance at survival.

You should probably not expect a film with a title such as this to be high art; and true enough, ‘Blood Vessel’ is exactly the sort of old-school B-horror you ought to be looking out for.

The premise is as attractively silly as it should be – a group of castaways on a lifeboat (whose medical ship they were on had been bombed by the Nazis) board a seemingly desolate German minesweeper, and soon find that the ship has been overtaken by a family of ancient vampires (or ‘strigoi’) who have devoured the Nazi crew.

True to its B-horror nature, the film draws you in with a creepy and claustrophobic setting. Much of the first hour is spent exploring the confines of the ship, where the group finds the charred remains of several Germans after being doused in gasoline and set on fire before stumbling upon a little girl named Mya (Ruby Isobel Hall).

It shouldn’t come as any surprise that Mya is a ‘strigoi’, not least when the only former crew member who is still human freaks out when he sees her. Alas, it will take a while before that dawns on our ragtag group of survivors, definitely not before some of them get shot in a closed-quarter shootout involving the aforementioned German sailor.

To say more would be spoiling the surprise for those intrigued enough to want to catch it; indeed, you’re best off letting the movie slowly unveil its secrets. Suffice to say though that it does evolve from a haunted house to a creature feature in the second half of the movie, especially once the rest of the ‘strigoi’ on board the ship are revealed in their full glory.

Director and co-writer Justin Dix makes the best use of what was clearly a limited budget in these later scenes, ratcheting the tension and action in confident and contained ways. His background in special effects and model-making (fun fact: the ‘Wicked of Oz’ production studio behind his movie was founded by him) certainly comes in handy here, and there are some nicely gruesome bits towards the end which will satisfy those looking for their ‘vampire’ movies to come with splatter.

To his credit too, Dix and his fellow screenwriter Jordan Prosser build just enough investment in the roster of characters to keep us invested. Among them, there is the Russian sniper Alexander (Alex Cooke), the medic Jane (Alyssa Sutherland), self-interested Englishman codebreaker Gerard (John Lloyd Fillingham) and Aussie digger Nathan (Nathan Phillips); in particular, you’ll enjoy the solid performances by Cooke and Phillips, especially towards the end when they team up to end the ‘strigoi’ once and for all.

Neither the movie itself or we are pretending that ‘Blood Vessel’ is anything more than B-grade shlock, but within that template, it does many things right – including strong atmosphere, pacing and old-school 1980s feel. Kudos to Dix for an assured effort in his sophomore feature film, and if you approach it with just the right attitude, you’ll find this Halloween-timed release a enjoyably cheesy viewing with popcorn and drinks..

(If you get the title, you should know what this B- but solidly made horror feature aims to - and succeeds in - delivering) 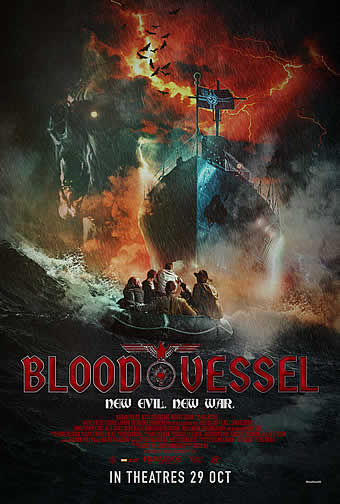