Synopsis: Chan stars as a hardened special forces agent who fights to protect a young woman from a sinister criminal gang. At the same time he with feels a special connection to the young woman, like they met in a different life.

Jackie Chan is at an enviable yet unenviable zenith in his acting career. On one hand, his legacy in the annals of action cinema is firmly cemented, and that honorary Oscar he received last year simply confirms it. On the other, that success has brought him to an inflexion point, begging the question of ‘what’s next’ for the 63-year-old star. Should he continue to make straight-up cop thrillers like ‘Police Story’, or Indiana Jones-type adventure thrillers like ‘Armour of God’ and its unofficial sequel ‘CZ12’, or goofy cross-cultural comedies like this spring’s ‘Kung Fu Yoga’? Or should he attempt new breakthroughs in hitherto untapped genres, like his most recent dramatic outing in the revenge-fuelled political thriller ‘The Foreigner’? To his credit, Chan hasn’t exactly rested on his laurels, which is also why while his latest foray into the realm of science-fiction may not be as impressive in execution, it is certainly laudable in spirit.

In Leo Zhang’s sophomore feature, Chan plays the special forces agent Lin Dong who finds himself pitted against a ‘super-soldier’ Andre (Callan Mulvey). The unintended consequence of a biogenetic experiment gone wrong, Andre is a former GI given a mechanical heart and regenerative abilities. Unfortunately, the ‘bio-roid’ has also turned against its creator Dr James (Kim Gyngell), whom Officer Lin and his team is assigned to protect at the start of the film. A fierce firefight at the end of an extended opening – that also tries to establish Officer Lin’s young daughter Xixi on the brink of death in hospital from leukaemia – ends with Officer Lin sustaining serious but not life-threatening injuries and Andre weakened to the point of needing to be confined in a sterile cage. Fast-forward thirteen years later, or the year 2020 to be exact, Dr James’ secret research has been adapted into a wildly popular novel by an Australian writer, thereby setting the stage for the re-emergence of Lin and Andre, both of whom are keen to find out just how its author had found his inspiration in the first place.

Their feud becomes entwined with a young teenage girl named Nancy (Ouyang Nana) suffering from increasingly vivid nightmares involving the late Dr James, as well as with the mysterious stranger Leeson (Show Luo) conducting his own parallel investigation into the origins of the titular novel. It is no surprise that Nancy is somehow related to Lin and Dr James, or for that matter, how she is linked to both these individuals. As narrative convention would have it, Nancy also holds the key to Andre’s recovery, leading to a series of cat-and-mouse pursuits between Lin and Andre’s henchwoman (Tess Haubrich) from downtown Sydney to the suburbs of Xingan in Jiangsu. Thankfully, Andre happens to have a gigantic flying aircraft carrier that looks suspiciously similar to the Avengers’ Helicarrier, thus allowing him to cross between the two cities without any seeming trouble from the authorities in either.

It is also within Andre’s own lab on board this aircraft carrier that the climactic showdown unfolds, but those looking for some signature Jackie Chan action will undoubtedly be disappointed. Not only is he content to do most of the fighting via some stun guns, he also leaves a good deal of the duelling to Leeson and his stalwart police teammate Susan (Erica Xia-Hou). Aside from a vehicular chase along a coastal road (because there’s nothing Jackie does in that besides spinning the wheel), there are but two other action sequences in the film – one is the opening firefight that sees Jackie doing a lot of running, ducking and being thrown about from multiple explosions; and the other is much-touted face-off at the Sydney Opera House, which is frankly an even bigger let-down because of all that hype.

Oh yes, that pièce de résistance is in fact an extended sequence between Lin and the Woman in Black (I kid you not; that’s how Haubrich is credited at the end) that begins on one of the performance stages within the Opera House, continues through its backstage corridors and culminates on its rooftop. To be sure, it begins humorously enough with Jackie’s use of some ‘magic show’ props and builds entertainingly through his characteristic misdirection; alas, it fails spectacularly at the back – not only is the camerawork more interested in getting overhead shots of the landmark than our two protagonists duelling below, it ends up being absolutely content on simply capturing Jackie tumbling down the side while holding onto a cable and sliding down to the ground safely. There is little death-defying about it, and even by Jackie’s recent standards in ‘CZ12’ and ‘Kung Fu Yoga’, it is most certainly a cop-out.

As much as we’re willing to appreciate just how Jackie’s age has constrained his physical moves, there is little else in ‘Bleeding Steel’ which compensates for it. The sci-fi is C-rate, ripped from a premise we’ve seen in countless other Hollywood B-movies and given a perfunctory treatment in service of (well) the action. The storytelling is predictable from start to finish, polished no doubt by veteran Jackie Chan collaborator Tony Cheung’s assured cinematography and yet another veteran Kwong Chi-leung’s skilful editing. The humour is awkwardly cutesy, though kudos to Luo for being such a game performer even if he means humiliating himself like dropping his pants and cross-dressing. Last but not least, the budding romance between Luo and Nana is cloying rather than endearing, so much so that the film is better without it.

Indeed, there is little raison raison d'être to ‘Bleeding Steel’ besides Jackie, who in turn cannot quite find a compelling proposition for the film aside from his trademark action. At least in his previous ‘The Foreigner’, Jackie showed greater emotional depth than we’d ever expected, and there was some engaging political intrigue in the plotting. There is little redeeming quality to the film, which only manages to pass muster if you’re expecting a Wong Jing type ‘Future X-Cops’ abomination. On one hand, our heart bleeds for Jackie, whose time, energy and effort would surely be better spent on a more worthwhile enterprise; on the other, we sense this is no more than a cold hard steel cash-grab among his legion of Asian and international fans. Like we said at the start, Jackie’s spirit in trying to forge new genre territory at his age is commendable, but let’s hope we get more ‘The Foreigner’ in future than say ‘Bleeding Steel’.

(Hardly even B-rate science-fiction and severely lacking in his signature daredevil action, 'Bleeding Steel' is best - and probably only - appreciated as Jackie Chan's foray into new genre territory) 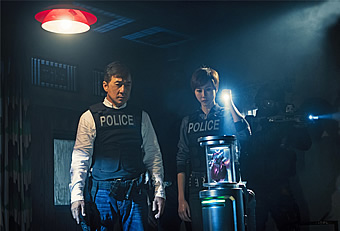 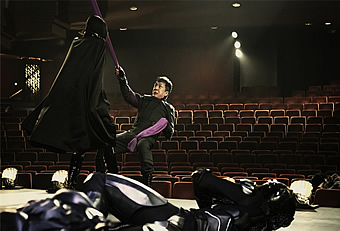 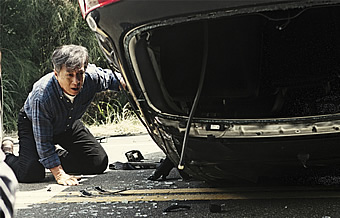 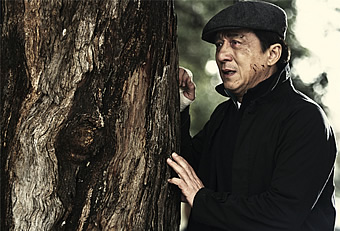 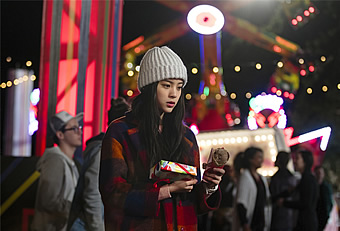 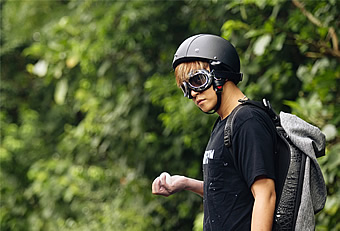