Synopsis: It’s been 20 years since James’s sister and her two friends vanished into the Black Hills Forest in Maryland while researching the legend of the Blair Witch, leaving a trail of theories and suspicions in their wake. James and his friends Peter, Ashley and film student Lisa venture into the same woods each with a camera to uncover the mysteries surrounding their disappearance. At first the group is hopeful, especially when a pair of locals Lane and Talia offer to act as guides through the dark and winding woods. But as the endless night wears on, the group is visited by a menacing presence. Slowly, they begin to realize the legend is all too real and more sinister than they could have imagined.

Love it or hate it, there’s no denying that ‘The Blair Witch Project’ was a landmark film for the horror genre in terms of technique and marketing. Made on a micro-budget of US$60,000, it complemented its then-novel found-footage format with clever marketing which positioned the film we would see as ‘recovered footage’ shot by the three student filmmakers who had gone missing in the Black Hills Forest of Burkittsville, Maryland while making a documentary about a local legend known as the Blair Witch. That it eventually achieved a lifetime box-office gross of US$250 million made copycats inevitable, but no other horror film since then – aside from the first ‘Paranormal Activity’ – has been able to replicate its formula to the same winning effect.

It would seem folly therefore for any filmmaker to attempt a sequel, let alone reboot, the original; and yet, despite our initial skepticism, we were quickly won over by director Adam Wingard and his regular writing collaborator Simon Barrett’s tense, gripping and even nail-biting follow-up that stays true to its predecessor while expanding on the mythology of the Blair Witch. Rather than going for the convenient of assembling yet another bunch of foolhardy adventurers to go back into the forest, Wingard chooses to establish a much emotional (and logical) raison d'être for flirting with danger – an online video of the house which was last seen in ‘The Blair Witch Project’, and a fleeting glimpse of a figure which James (James Allen McCune) believes to be that of her missing sister Heather Donahue, one of the three student filmmakers who went missing two decades ago.

Joining James on his quest to locate his sister are his filmmaker girlfriend Lisa (Callie Hernandez), his best friend Peter (Brandon Scott) and Peter’s girlfriend Ashley (Corbin Reid). Their first stop is the home of ‘Darknet 666’, aka Lane (Wes Robinson), who had uploaded the video; and having grown up in these part of the woods, Lane shares stories of the Blair Witch legend, including one where a father of seven children in the 1940s kills his whole family after claiming to have heard her voice and another where a mother says a hand reached out from under the river in the woods to pull her daughter in. But Lane only agrees to show James where the video was found on one condition – that they bring him and his girlfriend Talia (Valorie Curry) along for the hike, which James eventually acquiesces to despite Peter’s objections.

To reveal any further details would be spoiling the thrill of not knowing what to expect, but let’s just say that there is a nice midway twist that divides the group into two camps and leaves each more vulnerable to the hauntings later on. Lest you dismiss the movie as a whole lot of mindless running around, we reassure you that there is a surprisingly well-constructed story amidst the melee, which ties in seamlessly with the original while establishing a clearer order to the hauntings. Indeed, fans of the original will recognize the shallow creek known as Coffin Rock, where something bad happens to one of the characters here. Fans will also recognize the unexplained loud thuds at night, or the cairns and the five-pointed compound symbols, to which Wingard introduces the concept of lost time and the perpetual loss of daylight that adds to the fear and paranoia of the characters trapped within the wilderness.

That suspense is no doubt accentuated by the visual flow of the movie, which is further testament to Wingard’s achievement. Yes, Wingard and his cinematographer Robby Baumgartner do knowingly violate sight lines to make us as disoriented as the campers, but the shots are carefully pieced together to alternate between still and moving ones in order not to be nausea-inducing. Technology has also helped a lot in this regard, and whereas such means were not available two decades ago, the use of hands-free recorders and drone cameras allow for different points-of-view other than from the respective characters. So instead of diminishing the viewing experience, the found-footage format rather enhances the atmosphere of anxiety, dread and sheer terror, especially when we are like the characters unable to see what is coming from behind our backs.

The same can be said of the film’s shocking third-act twist, which takes place almost entirely within the house that Heather was last seen. Even more foreboding from the inside than it looks from the outside, the two-storey farm building plunges its visitors into a disorienting maze of corridors and decrepit rooms before they are made to confront its real horror. Oh yes, it is here that our characters – and us – come face to face with the Blair Witch herself, a hairy half-human, half-animal beast that stands tall and towering over its victims. These last 20 minutes in the Blair Witch’s presence are easily some of the most claustrophobic and nerve-wracking moments we’ve had in a horror film in quite a while, deliberately paced so that you have no time to catch your breath in between. It is frightening as hell when things go to sh*t, and by the time the ending that leaves just enough possibility for a follow-up comes around, we guarantee that you’ll be left thoroughly shaken.

To be sure, it was never possible for ‘Blair Witch’ to capture the zeitgeist like its predecessor did, but between convincing fans of the original that this follow-up some 17 years later is worthy of the original and striking a chord with a new generation of viewers, we’d say that Wingard’s film accomplishes both excellently. Indeed, ‘Blair Witch’ pays ultimate homage to the ground-breaking original by situating its characters in a fictional world where ‘The Blair Witch Project’ was a real document, and builds on that history to find its relevance in a franchise that was once thought dead after the disastrous 2001 sequel ‘Book of Shadows’. Not only does this sequel (filmed in secret under the title ‘The Woods’) breathe new life into the Blair Witch horror once again, it proves that found footage remains a formidable technique if employed by the right filmmaker. Both frankly make this one of the must-see horror movies this year.

(As perfect a sequel as it gets, this tense, gripping and even nerve-wracking follow-up to ‘The Blair Witch Project’ stays true to its predecessor while expanding on the mythology in clever and terrifying ways) 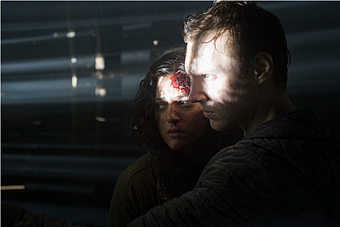