Synopsis: Ridley Scott returns to the universe he created, with ALIEN: COVENANT, a new chapter in his groundbreaking ALIEN franchise. The crew of the colony ship Covenant, bound for a remote planet on the far side of the galaxy, discovers what they think is an uncharted paradise, but is actually a dark, dangerous world. When they uncover a threat beyond their imagination, they must attempt a harrowing escape.

I never considered myself a purist. But Ridley Scott might make one of me yet.

Director Scott’s Prometheus began a journey into an origin story, effectively transforming the word universe from noun to concept. Although panned by some fans wanting their high-thrill monsters and less rhetoric, the first prequel was not only a box-office success, but also a visual and probing film.

That said, it’s starting to wear on me a little.

For those of you who haven’t watched the first prequel, you’re advised to do so before coming to this chapter. Alien: Covenant is a very confused hybrid.

The colony ship Covenant is journeying through space, steered by a single occupant - the android Walter (Michael Fassbender). An unexpected solar surge endangers the flight, and the crew is woken with the exception of the captain, who perishes in a malfunctioning pod - bye bye Franco.

The ship is repaired but a signal from a nearby planet suggests human life, or at least a habitable climate. When vice-captain Oram (Billy Crudup) sees how they can cut short their original journey of 7 years down to a few weeks, he takes it. Daniels (Katherine Waterston), his second-in-command resists, but is eventually overridden.

Most of the team leaves the ship to explore the signal on the planet. Two poor lads very quickly become infected by native spores and the Xenomorph comes back - literally.

There’s a flurry of gunfight, followed by a very manic pilot who blows up the crew’s transport back. As the stranded survivors attempt to fend off the beasts, David (also Fassbender), the android from Prometheus appears to lead them to safety. Or not.

Alien: Covenant feels like a stapled set of leftover story and production notes. The start and tail of the film feels like a slasher gig. One can see the effort that harks back to the original series with its straightforward motivations. Sadly, this lacks the tension, creepy pacing and most key, cunning enemy. Over here, the monster becomes merely a tool.

There’s barely any real clashes, because the formula is pretty much this: crew hears a sound, alien appears, the camera tracks backwards from the location as we hear chokes and screams. The imagination can sometimes be more horrifying, but not in this instance.

Admittedly, the initial birth of the Xenomorphs is still gory fun to watch, but it quickly disappears because - hi everyone, David is here!

The middle portion of the film has the renegade android playing god. He quotes Byron and listens to Wagner, acting grandiose and expounding his philosophies, mostly to no one in particular, except maybe poor Walter.

Some may give a free pass to Scott, but his latest installment is ringing very hollow. Yes, it does fill out the story a little from part one, but at its core, this is a 30-minute plot stretched out too thin with unnecessary arcs and frayed circuits. Where’s your usual elegance Ridley? Why such oblique musings? Should we discount product for effort and continuity? I think not.

For example. there’s the behaviour of the crew. Ever heard of emergency training people? Given their key roles in this mission, they are unbelievably inept - even sub-average IQ so. A pilot goes ape-crazy after a fellow colleague is injured, making mistake after mistake that leads to the transport ship being blown up.

Another manages to say something about, “if there’s any time to take a risk, it’s now” before throwing an unconvincing look to his pilots and taking the entire colony ship with over 2000 denizens into a storm cloud that will technically obliterate them. I guess he knew that movie logic is stronger than any silly force fields.

I swear I wasn’t looking out for them because I like exercising my suspension but the loopholes are glaring. In one scene, it is revealed the alien pathogen only infects sentient beings, ignoring botanical hosts, and yet the first crew infection come from plant spores.

Then when infected, one very dicey scene shows a spinal exit from a feisty alien, but the same infection comes out the opposite way in the other victim.

Missed opportunities were present too. Some of the best visual horror comes in parts from the mutated experiments of David’s. But the showcase is glancing and treated like an afterthought.

Some Scott fans will probably call me fussy. But go watch it, and tell me if you’re not infected with a sense of ridicule at some point. Ridley needs Ripley.

(Like the poetic android’s many experimental hybrids, this story is the same - disappointingly lifeless) 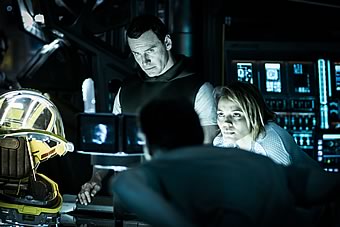 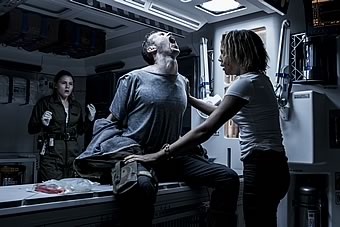 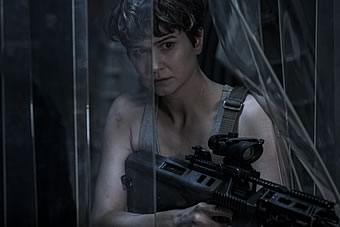