Synopsis: From Warner Bros. Pictures and director James Wan comes an action-packed adventure that spans the vast, visually breathtaking underwater world of the seven seas, "AQUAMAN" starring Jason Momoa in the title role. The film reveals the origin story of half-human, half-Atlantean Arthur Curry and takes him on the journey of his lifetime-one that will not only force him to face who he really is, but to discover if he is worthy of who he was born to be...a king.

Who would have thought, slightly over a decade after HBO’s ‘Entourage’ poked fun at the idea that anyone would try to make an ‘Aquaman’ film in earnest, that we’d in fact be staring at a big-budget adaptation of the DC comic book character? After all, a superhero whose key powers were his strength, his ability to swim at tremendous speeds and his telepathy with sea life does not immediately make for a compelling lead character, although his prior appearance in 2017’s ‘Justice League’ with Jason Momoa in the role did provide some memorable bursts of roguish fun. Yet with the ambition, imagination and chutzpah of director James Wan, ‘Aquaman’ surfaces as one of the most glorious and unapologetically entertaining comic book superhero movies we’ve seen of late.

Like last summer’s ‘Wonder Woman’, ‘Aquaman’ takes a definitive shift away from the earlier grimness of the DC cinematic universe that Zack Synder established, choosing instead for bright phosphorescent colours and imagery that are reminiscent of an underwater ‘Tron’. There is plenty of dazzle and detail in Wan’s undersea settings that range from the massive palaces and arenas of the nation of Atlantis where its people ride on hammerheads and seahorses, to a creepy deep-sea trench teeming with fierce and deadly cannibals that look like the evil cousins of the monster from ‘The Shape of Water’, and right down to the Jules Verne-ian hollow interior within Earth’s core where dinosaurs as well as a Kraken-like creature still roam. Oh yes, the water-world-building here is breath-taking to say the very least, and fully worthy in and of itself of the IMAX experience.

Within the stunning visuals is a rollicking action-adventure that is familiar yet thoroughly enjoyable in its ‘anything goes’ attitude. At its core is an origin story of Arthur’s journey from small-time superhero (an early sequence sees him saving the crew of a Russian submarine from a band of nautical pirates, one of whom will go on to become his arch-nemesis Black Manta) to king of the seven sea kingdoms that make up Atlantis, while saving the land-dwellers from his half-brother cum present king Orm (Patrick Wilson) and falling in love with Orm’s fiancée Princess Mera (Amber Heard). If some part of that sounds to you vaguely familiar to the plot of ‘Thor’ or even ‘Black Panther’, you’re not mistaken, but what it lacks in originality, it certainly makes up for in pace, scope and scale.

Despite clocking in at close to two and a half hours, this is easily one of the most fast-paced and action-packed superhero movies ever. Staying just a couple of steps away from frenetic, Wan transports his characters from sequence to sequence of pulse-pounding action, pausing just long enough to let the emotional moments register. There is more scope here than one would expect in an origin story, not only in terms of the wondrous undersea kingdoms that we described earlier, but also the numerous above-water locations that Arthur and Mera globe-trot to (including the Sahara Desert where an abandoned Atlantean splinter kingdom now lies, and the picturesque Italian city of Sicily where the ruins of the statues of Roman kings still stand). And as befitting that extent of scope, the scale here is tremendous, combining the stakes in ‘Avatar’ with bits from ‘Indiana Jones’, ‘The Mummy’ and ‘Pirates of the Caribbean’.

Though so much of the movie is massive, there are a couple of standout ones worth singular mention. Arthur and Orm’s very first challenge in a Roman colosseum-like stadium dubbed the ‘Ring of Fire’, as well as their subsequent chase through Atlantis’ iridescent metropolis, is thrilling to watch, combining gravity-defying action choreography with seamless cinematography. The showdown between Arthur and Black Manta on the rooftops and in the town square of Sicily is also especially exhilarating, pitting the former’s raw strength against the latter’s powerful high-tech weaponry. But the piece de resistance is no doubt the colossal finale that unfolds with a jaw-dropping ferocity, intensity and enormity, what with all manner of sea creatures unleashing laser fire at one another, coupled with the destruction wrought by the gargantuan Kraken-like creature we mentioned earlier.

Amidst the underwater spectacle, the film packs some surprisingly emotional parts thanks to the stellar ensemble cast assembled here. Momoa brings charisma and charm to deliver a fierce yet funny Aquaman, while Heard makes Mera a smart and likeable heroine, and together they exude some genuine buddy chemistry as they trade barbs and riff playfully with each other. Nicole Kidman is easily the film’s standout supporting performer, packing so much in a relatively small number of scenes with both Momoa and Temuera Morrison (who plays a lighthouse keeper she falls in love and has Arthur with) as Arthur’s mother and former queen of Atlantis. Kidman’s humanity as Atlanna, coupled with Momoa and Heard’s conviction in their quest, pack a powerful message about the virtues of inclusion.

Truth be told, ‘Aquaman’ exceeded even our wildest expectations of a fun superhero blockbuster. There have been comparisons of it being ‘an undersea Star Wars’, and certainly the imagination on display is exciting, transportive and spectacular. Rather than mimicking its DC cousins or its Marvel counterparts, ‘Aquaman’ stands on its own distinct style in terms of colours, imagery and visual concepts, and sweeps you away into a whole hitherto unseen underwater extravaganza. As risky a proposition it may have been, its embrace of a wild mix of elements from different types of stories only makes it even more unique and delightfully quirky. But through it all, its purpose is to serve up big, bold and kick-ass entertainment – and in that regard, we guarantee you that you’d be swept away by its infectiously exuberant tide of action, fantasy, drama, romance and spectacle.

(Like no other DC or Marvel superhero blockbuster you've seen, this undersea extravaganza sweeps you away with its visual ambition, imagination and chutzpah, and thanks to a stellar ensemble, packs an emotional wallop too) 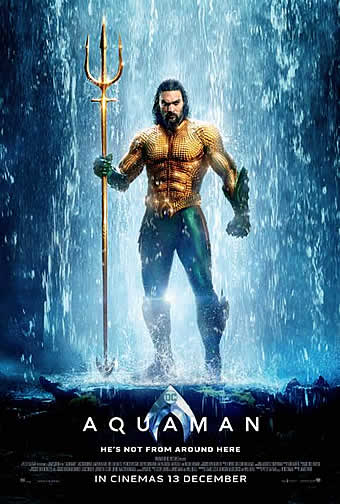