BOOK REVIEW #19: WONDER WOMAN: THE ART AND MAKING OF THE FILM

Wonder Woman was a huge success for Warner Bros and a strong entry in the lacklustre DC universe. This handsome, majestic looking 192 page hardcover book by Sharon Gosling features many gorgeous artwork and behind-the-scenes photos of the Patty Jenkins’ hit movie.

The book is presented chronologically introducing us to the locales and characters as per the movie. So imagine holding on to this book as you rewatch it on bluray. It begins with an introduction from Jenkins and then to Themyscira as costumes, weapons of the Amazon warriors are revealed. Every page is filled with sweeping images and insights from the producers including Zack Synder and the production staff.

This is followed by The Journey as we are treated to more concept art and sketches as Diana embarks on a dangerous journey with Steve Trevor. At the same time, we learnt that the boat the two took to London never really touches water as it’s expensive and time consuming to film on actual water according to visual effects supervisor Bill Westenhofer. It’s in fact done in postproduction by Double Negative. Since this is also a making of book, we are also treated to pictures of how CGI enhanced the final look of the movie and how greenscreen are used to enlarge the sets.

In Man’s World, we learnt how the High Commission of Australia is redressed for the department store scene and how Gal Gadot is such an inspiration on the freezing cold set. This chapter is notable for taking a deeper look at the movie’s iconic action sequence and also the final airfield battle opposite the evil Ares.

I love the fact it’s not mainly an art book but also in equal parts, it take viewers on a fascinating journey on how the filmmakers achieve the movie’s final look using the combination of CGI and clever practical effects take for example, the on-set lasso is actually made from a string of LED lights. The book delves not just into Wonder Woman but also Trevor, his buddies, the briefly seen Amazon warriors and the villains as well. Every character, good or bad is given enough coverage and information, adding more details to the movie.

Before we wrap things up, this coffee book table book published by Titans Books once again deliver the goods and definitely deserved to be added to your collection. Wonder Woman: The Art and Making of the Film comes with a nice collectible as well: The negative which Batman sent to Wonder Woman in the beginning of the movie. Cool! 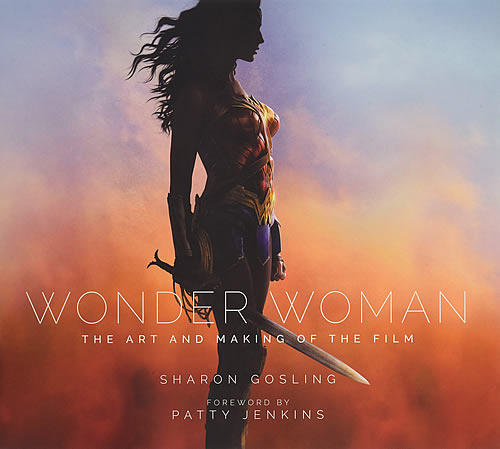