Synopsis: More than twenty years ago, there were three ‘Ban-doh’ (outdoor banquet) Master Chefs who dominated the catering business in Taiwan. They were known as Master Silly Mortal, Master Ghost Head and Master Fly Spirit. However, the outdoor banquet business has been in decline since Taiwan’s economic take-off, and even the master chefs feel helpless to turn the tide. Master Fly Spirit wants to pass the family recipes and culinary skills on to his only child, Wan, but she desperately wants to run away from the family business and to become a fashion model. Nevertheless, fate proves that Wan is destined to take up the challenge and mission she once shunned…

Life’s got its ups and downs, and when it is at its rock bottom, this is the exact film we need to make things a tad better. So it happened that this reviewer hasn’t had the best of days, and after watching Chen Yu Hsun’s first feature film after 16 years, he has become more assured that life does have its jolly moments worth celebrating. A success back in Taiwan, this summer blockbuster has made its way to our humble island with its original soundtrack (yay to hearing Taiwanese Hokkien!). With a runtime of 144 minutes, can local audiences stomach the culinary comedy?

The story’s female protagonist is a failed model who returns home from Taipei, only to find out that misfortune has befallen her family’s restaurant. What used to be a reputable eatery is now a single noodle stand. Already burdened with an enormous amount of debt, how is she going to return glory to her family?

There are plenty of colourful characters in this film, including two amusing debt collectors (Chen Chu Sheng and Chen Wan Hao), a self proclaimed food doctor (Yo Yang, who provides the star factor to the movie), a trio of nerds who effortlessly steal the limelight from the main leads, and culinary masters played by veterans of Taiwanese showbiz. Lin Mei Hsiu, who you may recognise from Taiwandrama serials, plays the female lead’s mother, and her happy go lucky outlook in life is an encouragement to anyone who is shrouded by gloom. Watch out for a hilarious sequence where she dances to the Golden Horse Award nominated original song, which translates into “no husband now”. Her mother daughter pairing with Kimi Hsia (a relatively unknown name in Singaporeunless you are a loyal follower of Taiwanese showbiz) has natural chemistry, and you’ll root for them as they decide to enter a national cooking competition to pay off their debts.

It is evident that a high budget has been pumped into this movie. Having Warner Bros. on board as one of its main investors, and an ensemble of A list actors in Taiwanese showbiz, there must have been a lot of expectations for this production to sell well. And it has, considering the box office earnings of more than NT$300 million (S$12.7 million) in its home country. There are plenty of sleek production values (big sets, countless extras and impressive cinematography) and lots of good natured humour (unlike David Loman, the other Taiwanese box office success screened in Singapore earlier this year, the references here are more universal), so this is a film that you’ll have no difficulties liking.

But what’s most impressive about the movie are the emotions portrayed in the story. There are some delicate and heartfelt moments that you’ll fondly remember long after the credits roll. One plotline to look out for involves the elusive master chef played by the highly respected Wu Nien Chen, who cooks for vagabonds. He brings viewers into Taiwan’s underground railways and tunnels, and tells us what his profits are cooking for the outcasts. The scene is one of cinema’s best, and will have you reflecting on what’s important amidst the hustles and bustles we are constantly surrounded by.

(Besides outrageously hilarious moments, there are heartfelt emotions in this Taiwanese commercial hit that make it a must watch) 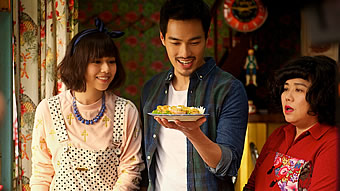