Synopsis: WRATH OF MAN is a revenge based action thriller from acclaimed and innovative director Guy Ritchie (Aladdin, Sherlock Holmes, Snatch). This contemporary movie tells the story of the cold and mysterious ‘H’ as he goes to work at a cash truck company that moves hundreds of millions of dollars around Los Angeles every week. H’s objective is unique and unanticipated, but is only revealed incrementally, utilizing a suspenseful and carefully constructed nonlinear narrative to lay bare his true intentions. Shifting across timelines and various character’s perspectives, WRATH OF MAN builds to a thrilling, tragic, and inevitably bloody catharsis.

Few actor-director collaborations in the crime thriller genre are as electrifying as that of Jason Statham and Guy Ritchie. ‘Wrath of Man’ marks their fourth time together following ‘Lock, Stock And Two Smoking Barrels’, ‘Snatch’ and ‘Revolver’, and the Los Angeles-set remake of the 2004 French movie ‘Le Convoyeur’ sees the British duo attempt a change in tone from their earlier films. Gone is the self-aware humour that is Ritchie’s trademark; instead, the British director channels his inner Michael Mann to deliver a tense and taut thriller that rivals the best from the auteur.

Co-written by Ritchie, the story opens with the single most pivotal scene of the entire movie. While on one of its usual runs, an armoured cash truck gets hijacked by a professional crew posing as construction workers, and amidst the scruffle, an innocent teenage bystander is shot dead by one of the robbers. What follows is told in four brilliantly named chapters – ‘A Dark Spirit’, ‘Scorched Earth’, ‘Bad Animals, Bad’ and ‘Liver, Lungs, Spleen and Heart’ – whose events are chronologically shuffled to give us perspective from each of the key players.

Not surprisingly, ‘A Dark Spirit’ refers to the strong and silent employee Patrick Hill (Statham) who has just joined Fortico Security, a company specialising in armoured truck transport. Simply called ‘H’ by his colleagues, the newbie is at first dismissed by them, until he single-handedly takes out an entire crew during an attempted robbery. While most are impressed, some are also suspicious of H’s identity, not least because he had demonstrated mediocre scores on his shooting test prior. These suspicions are confirmed when during another separate robbery attempt, H scares off the entire crew just by showing his face to them.

With that, ‘Scorched Earth’ reveals who H is, including and especially why he had assumed a new identity to join the ranks of Fortico; while ‘Bad Animals, Bad’ focuses on the group of ex-military personnel-turned-robbers whom H finds himself up against. Like its name suggests, ‘Liver, Lungs, Spleen and Heart’ brings H together with his nemeses in brutal and violent fashion; in particular, the climactic heist sequence is absolutely heart-pounding, magnificently choreographed and executed with clockwork precision and maximum firepower.

That sequence underscores what is obvious over the course of the movie – unlike his previous movies, even say his last ‘The Gentlemen’, Ritchie has distinctly abandoned his trademark stylistic flourishes, frenetic pacing and wise-cracking banter in favour of a hard-boiled crime thriller that isn’t afraid to pull any punches, break any bones or even spill any blood. Indeed, we dare say that those expecting a typical Ritchie vehicle will probably be disappointed, for ‘Wrath of Man’ shows the director willing to go into auteur territory in order to burnish his filmmaker credentials.

And for the most part, Ritchie impresses with a gripping thriller not afraid to reshuffle the deck in order to disrupt expectations, be it what H is after, who H really is, or whom he is up against. If it isn’t yet apparent, you should know that the movie is much more of an ensemble story than what its poster or trailer suggests, giving substantial parts in the story to supporting characters such as H’s veteran co-worker Bullet (Holy McCallany), the artful leader of the group of soldiers-turned-criminals Jackson (Jeffrey Donovan), and the volatile member of the group Jan (Scott Eastwood). Even as he plays around with chronology and points-of-view, Ritchie demonstrates a firm grasp over the storytelling, keeping the proceedings tight throughout the entire movie.

As different as this may be in tone and style from their previous collaborations, Statham proves the perfect leading man for ‘Wrath of Man’. With just the right amount of understatement, Statham embodies the gruff, menacing and determined nature of his character beautifully, leading the charge both as an action star as well as a dramatic actor. The rest of the cast are for the most part impeccably chosen, with perhaps the exception of Josh Hartnett as a tough-talking coward named Boy Sweat Dave and Post Malone in an unnecessary glorified cameo.

Even so, this is a rock-solid heist thriller by Ritchie. The pacing never falters, the writing is sharp, and the action is pulse-pounding. It is also a satisfying revenge tale, anchored by Statham’s compelling tough-guy act. Thanks to Statham, ‘Wrath of Man’ oozes with machismo that comes to a head in the explosive finale worth the price of admission alone. Truth be told, Ritchie and Statham probably took a break with each other after 2005’s critically panned ‘Revolver’, but ‘Wrath of Man’ reinforces that there is indeed winning chemistry between the duo and reason to look forward to their fifth time together in ‘Five Eyes’. 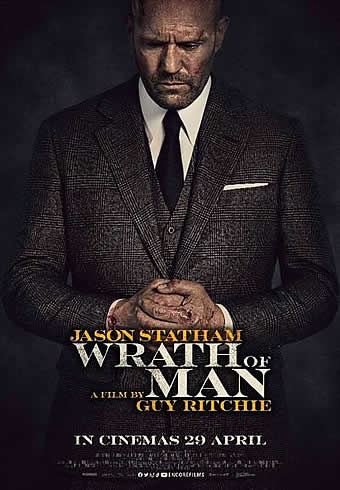