Synopsis: With the future of the human race at stake, a group of young men and women, bred for intelligence and obedience, embark on an expedition to colonize a distant planet. But when they uncover disturbing secrets about the mission, they defy their training and begin to explore their most primitive natures. As life on the ship descends into chaos, they’re consumed by fear, lust, and the insatiable hunger for power.

At this point, the career of filmmaker Neil Burger seems a bit spotty. Burger burst to the scene with the rather underrated The Illusionist which he wrote and directed. His follow-up was a dud called The Lucky Ones; then he struck the jackpot again with Limitless and Divergent based on the young adult novel of the same name. It has been more than a decade since he helmed a project he had written himself. And here he is, donning multiple creative hats to assemble a sci-fi fantasy that is clunkier than the SpaceX rocket.

Burger is the kind of filmmaker that can easily attract half of Hollywood talents to flock towards him. Voyagers boasts up-and-coming, young stars like Tye Sheridan (Ready Player One), Lily-Rose Depp (daughter of Johnny), Fionn Whitehead (Dunkirk), Isaac Hempstead Wright (Games of Thrones) and Colin Farrell. Trust us, there’s definitely some solid casting here to keep you engaged.

In a “what-else-is-new” storyline, it’s the year 2063, thirty lab-bred young men and women are sent deep into space in search of a new home because the human race is at stake. Their mission is going to take 86 years before reaching the habitable planet. Thus we are happily thrown into space with this group of youngsters, all looking hot, sultry and horny. Soon, two buddies, Zac (Whitehead) and Christopher (Sheridan) uncover some horrifying secrets behind this so-called mission. Not in the Event Horizon kind of way although there are frequent mention of an ominous Alien force; more along the line of manipulating their drinks in an attempt to control their deepest lust and desire.

Voyagers falls somewhere between an indie sci-fi flick and a YA based novel adaptation. The movie takes place mostly in an enclosed spaceship. Shot expertly by Enrique Chediak (Bumblebee, American Assassin) and basked in hues of metallic blue, it’s beautiful, cold and bleak at the same time. Liked a budgeted indie, Burger’s stylish touches make it a worthy cinematic experience, although we must add the script seems like paying tribute to the classic William Golding’s Lord of the Flies in an updated YA kind of manner.

At the heart of Voyagers is Christopher, the movie’s main hero and we are pretty sure you know who is the antagonist. Christopher simply wants to know what Richard (Farrell), their mentor and instructor is hiding from them. He is mere curious or rebellious, perhaps intrigued by why their drinks are spiked and why is there a mysterious room in the ship. Zac on the other hand takes things to the extreme. He craves power, lust after Sela (Depp) and has no qualms resorting to violence to achieve his aims.

Without giving much away, Voyagers is chock full of big ideas. Are humans born as savages or the opposite? Does a civilisation needs an authority to live harmoniously? Can lust and impulses be controlled? Burger is relentlessly in pursuing these themes using the various characters as tools to unfold the events. At times, the narrative does deliver a compelling message but with such advances in science, technology and the mission so important, it does seem ridiculous for a bunch of youngsters to govern themselves without anyone else onboard.

While Burger’s idea and direction is strong, the movie doesn’t really pick up steam until towards the second half. You can blame it on the not-so-interesting characters or the cast’ somewhat wooden performances. There’s no Katniss Everdeen, Tris Prior, Thomas or a particularly charismatic, memorable character to invoke any emotional attachment. Voyagers is a mixed bag in the end. Undeniably, Burger’s scripting offers lots of thoughts and questions. However, it’s greatest sin is how everything works in the end in the most predictable way ever.

(Stripped bare of any emotional connection but offers an intriguing idea, Voyagers is a slow-moving journey fuelled by the presence of up-and-coming stars) 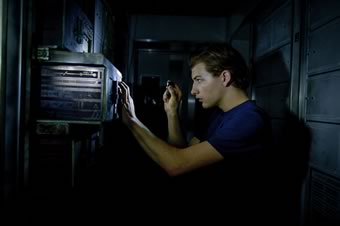 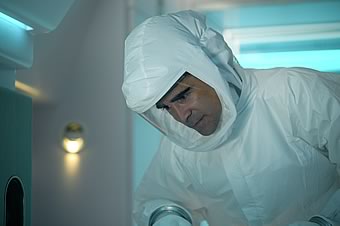