Synopsis: A once legendary gangster Dong-chul (Ma Dong-seok) cleans up his past and tries to settle down to enjoy an ordinary life with his angelic wife Ji-soo (Song Ji-hyo). However, due to his naive and reckless nature, he continuously gets tricked into making bad business decisions. Then one day, he returns home to find the place cluttered with signs of struggle and his wife nowhere to be found. Soon after, he realises that his wife is kidnapped, he receives a call from a stranger offering to pay him to give up his wife.

After his breakout role as the stoic, wife-doting hubby in the zombie hit Train To Busan, Ma Dong-seok or better known as Don Lee is very much a household name and recognizable face in Korea movies nowadays. Obviously, he doesn’t mind being typecast as a typical tough guy following the success of the latter because here he is playing yet another stoic, wife-doting hubby in the action thriller, Unstoppable.

After marrying his lovely wife, Ji-soo (Song Ji-hyo), Kang (Don Lee), an ex-legendary gangster now makes a decent living as a fishmonger with his buddy, Choon-sik (Park Ji-hwan). As seen in the prologue, Kang dotes on his wife and by betting on a crab king venture, he hopes to grant her a far lavish life. But before his latest venture yields any results, Ji-soo gets kidnapped by the psychotic head of a human trafficking syndicate, Gi-tae (Kim Sung-oh) in her own home on a rainy night.

When Kang realises there’s no hope pining for help from the police who claims no substantial evidence and witnesses, it’s time for him to revert to his special set of skills and with the assistance of his two sidekicks, Choon-sik and Bear (Kim Ming-jae), a fumbling private detective to embark on a journey to rescue his beloved Ji-soo. In short, “Bull” is back and anyone in his way should back off.

Obviously, Unstoppable is not going to score points on originality but newcomer Kim Min-ho who wrote and direct it manages to pull off a remarkable action flick that is filled with both comedy and tension. The tone is occasional cartoony despite some hard-hitting sequences all thanks to the antics of Choon-sik and Bear. One particular standout sequence has them trying desperately to take back Gi-tae’s money from the police station and before that, an intense scene that has Kang strangling one of Gi-tae’s henchman which unleashed a few laughs in the end.

As usual the heavyweight Don Lee is charismatic onscreen. While he might not possessed the look of a typical K-pop singer, he definitely has the ability to switch effortlessly between a down-and-out Kang and a macho, heroic Kang. No one can plays a fluffy tough character as well as him it seems. The little-known Kim Sung-oh is equally captivating as the evil, maniac antagonist though if this is a hardcore, R-rated action flick, the character of Gi-tae might be a lot fearful and scarier.

Kim Min-ho knows exactly where the strength of Unstoppable lies and he has no qualms putting Don Lee’s knuckles and punches right in the center of things. Watching him throwing Gi-tae’s henchmen all around the place can be a pretty rewarding thing after a hard day work. As one of the movie’s few lady characters, Song Ji-hyo is a little underused. Despite that, she does have an exhilarating escape sequence that will have you rooting for her.

Unstoppable is a 116 minutes action movie that never for one second feels like a close to two hours movie or should I say, it’s never tired watching Don Lee crushing his opponents like bowling pins. While it’s touted as sort of a Korean version of Liam Neeson’s Taken, it has enough fun, comedy and another of Lee’s bad-ass effort to make this a standout action flick.

(The equally tough and soft Don Lee scores a bullseye yet again, this human teddy bear is fantastic even in a generic action flick) 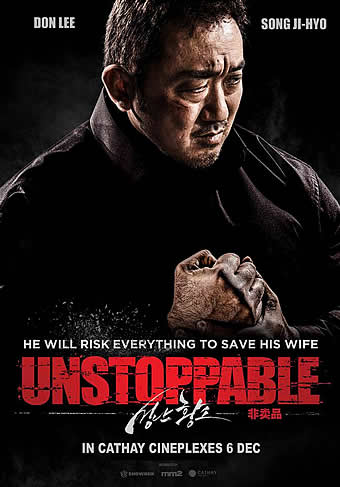