Synopsis:  Gus Lobel (Clint Eastwood) has been one of the best scouts in baseball for decades, but, despite his efforts to hide it, age is starting to catch up with him. Nevertheless, Gus—who can tell a pitch just by the crack of the bat—refuses to be benched for what could be the final innings of his career. He may not have a choice. The front office of the Atlanta Braves is starting to question his judgment, especially with the country’s hottest batting phenom on deck for the draft. The one person who might be able to help is also the one person Gus would never ask: his daughter, Mickey (Amy Adams), an associate at a high-powered Atlanta law firm whose drive and ambition has put her on the fast track to becoming partner. Mickey has never been close to her father, who was ill-equipped to be a single parent after the death of his wife. Even now, in the rare moments they share, he is too easily distracted by what Mickey assumes is his first love: the game. Against her better judgment, and over Gus’s objections, Mickey joins him on his latest scouting trip to North Carolina, jeopardizing her own career to save his. Forced to spend time together for the first time in years, each makes new discoveries—revealing long-held truths about their past and present that could change their future.

For decades, Gus Lobel has been sifting Major League gold from the riff raff.

But with old age creeping up, the tables have turned and the baseball scout now risks being overlooked as a stubborn decrepit, unable to keep up with the latest technology and burdened with failing eyesight that compromises his traditional methods of scouting (i.e. being on the scene and watching players bat).

Barring his years of experience with the game, Gus is about to lose it all. Enter Phillip Sanderson (Matthew Lillard) as a young upstart eyeing Gus’ job. Armed with a fat ring and chauvinist airs, Lillard is great as the classic money-faced douchebag and is eager to sideline the old veteran à lathe controversial sabermetric wizadry explored in Moneyball (2011).

As Johnny Flanagan, a baseball player once scouted by Gus’s but who has now lost his shine,Justin Timberlake again proves some acting chops, so he really cannot be faulted where a focused but safe and banal script only allows him to fill the romantic sidekick and comic interest mould. Before he falls into the stereotypical league of pretty boy roles, which he however, wickedly milks to his advantage in films such as The Social Network (2010) and Friends with Benefits (2011), the singer-turned-actor should start searching furiously for that breakthrough role.

Amy Adams already had hers, and she continues to ride on the waves of her rising popularity in this film. Refreshingly earnest and incredibly feminine, Amy has a very potent girl-next-door charm, and she weaves this into her role as Mickey—Gus’s ambitious, feisty and strong-headed daughter, who eyes a partnership at the law firm she works at. Amy Adams has come a long way from her days as the darling princess of modern-day fairy tale Enchanted (2007). With strong performances in the critically-acclaimed The Fighter (2010) and the latest festival hit The Master (2012), Amy is blazing a trail to the A-list crop. It will be exciting to see her working under the insanely creative director Spike Jonze in Her (2013)and as Superman’s love interest Lois Lane in Man of Steel (2013).

In Trouble with the Curve,Adams and Eastwood put up good performances, and there are plenty of father-daughter dynamics in the fray, but it does get predictable at times. Perhaps as one of the old guard, Eastwood, who embraces these irritable-old-man roles, still pulls off clichés with earnest simplicity, and delivers a heartwarming portrayal of a lonesome and broken old man whose tough, aloof front belies his fondness for his daughter.

Watching this film, I admit feeling a little unease missing out on the multiple baseball references, jargon and statistics, yet the acting and subject matter is compelling enough to strike a chord even with those not thoroughly familiar with the game. Trouble with the Curve is thrilling enough to convey a keen sense of the lives and enthusiasm of people whose lives and culture revolve around and are so defined by the sport.

(More a three-base hit than a home-run, the film’s got all the fireworks of a decent Hollywood outing. Just don’t expect much more than that) 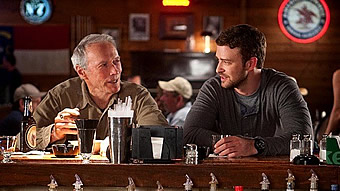