Synopsis: Ben Stiller and Eddie Murphy lead an all-star cast in Tower Heist, a comedy caper about working stiffs who seek revenge on the Wall Street swindler who stiffed them. After the workers at a luxury Central Park condominium discover the penthouse billionaire has stolen their retirement, they plot the ultimate revenge: a heist to reclaim what he took from them. Queens native Josh Kovacs (Stiller) has managed one of the most luxurious and well-secured residences in New York City for more than a decade. Under his watchful eye, nothing goes undetected. In the swankiest unit atop Josh’s building, Wall Street titan Arthur Shaw (Alan Alda) is under house arrest after being caught stealing two billion from his investors. The hardest hit among those he defrauded? The tower staffers whose pensions he was entrusted to manage. With only days before Arthur gets away with the perfect crime, Josh’s crew turns to petty crook Slide (Murphy) to plan the nearly impossible…to steal what they are sure is hidden in Arthur’s guarded condo. Though amateurs, these rookie thieves know the building better than anyone. Turns out they’ve been casing the place for years, they just didn’t know it. Movie Review:

We have to hand it to ‘Rush Hour’ director Brett Ratner- say what you will about his lack of depth as a filmmaker, but the guy deserves accolades for rewarding one of the best comedians of our time with one of his best roles in recent years. Yes, we’re talking about Eddie Murphy, who spent the past few years wasting away in fat suits and learning how to talk to animals- but thanks to Ratner, those days are hopefully over, as Murphy returns to the wisecracking, smart-mouthed sass that we loved so much in his ‘Beverly Hills Cop’ days.

Murphy is here playing the streetwise criminal Slide, recruited by a bunch of blue-collar workers to rob a Bernie Madoff-type Arthur Shaw (Alan Alda) responsible for swindling away their hard-earned pension money. It takes some time for screenwriters Ted Griffin and Jeff Nathanson to set up the premise under which these hardworking men would conspire to commit such a high-stakes crime, but once they do the necessary to pave the way for Murphy’s entry, the film becomes an entirely different animal altogether, enlivened by the sheer energy and verve of Murphy’s irreverence.

The film’s best moments come courtesy of Murphy’s instructions, teaching the bunch of rookies- including the ringleader Josh Kovacs (Ben Stiller), the slow-witted Charlie (Casey Affleck), the jumpy Fitzhugh (Matthew Broderick) and the naïve Enrique (Michael Pena)- what it takes to be a criminal. All but Fitzhugh are employees at a luxurious high-rise residential building on Manhattan’s Columbus Circle (played by Trump Tower Columbus Circle) called The Tower- Josh the manager, Charlie the concierge and Enrique the recently employed bellhop- and basically good honest people forced to thievery both by circumstance and Shaw’s absolute arrogance. Oh and let’s not forget the Jamaican maid Odessa (Gabourey Sidibe) with some much-needed safe-cracking expertise, whose sexual advances at Murphy are equally laugh-out-loud hilarious.

Once the gang get their act together, the witticisms are unfortunately taken over by the heist proper. ‘Ocean’s Eleven’ scribe Griffin ensures that the break-in remains riveting throughout, keeping it true to the crew’s inexperience by having their initial plans thwarted and leaving them scrambling to hunt for Shaw’s prized treasure. Yet entertaining as the heist- that unfolds over Macy’s Thanksgiving parade- may be, the crime is too elaborate and too far-fetched to remain credible to the end, demanding that reason be (quite literally, we may add) thrown out of the window. Credit however must go to Ratner for staging these improbable sequences with admirable flair, so much so that you’ll be willing to forgive the leaps of logic it tries to get away with.

Of course, it isn’t just Murphy that Ratner has brought along for the caper, but an excellent ensemble cast whose chemistry lights up the movie. Affleck’s deadpan performance is consistently humorous, none more so than when he gives a monotone pep talk to the rest of the staff on the eve of Thanksgiving. Broderick plays it low-key most of the time, but he gets much sympathy as the middle-class fellow that has fallen on hard times as well as a fair share of laughs learning to be on the other side of the law. Pena is especially amusing acting goofy, the actor usually cast in more serious fare revealing a hidden gift for comedy. And together, Stiller, Murphy, Affleck, Broderick and Pena are a great team, bouncing off each other's lines with perfect timing.

Yet as much as the film is played for laughs, it doesn’t forget that its characters are mirrored on those who have similarly lost their jobs or even their life savings in the wake of the economic crisis over the past three years- so Ratner and his screenwriters give the movie added emotional heft through Lester (Stephen McKinley Henderson), the veteran doorman of The Tower who tries to commit suicide when he realises his money which he gave to Shaw to invest is all gone. His despair is the catalyst that puts Josh’s plans into motion- and Ratner lets Shaw’s comeuppance be somewhat a vicarious triumph for the working-class among his audience who see parallels between themselves and Josh and the rest of his crew.

Then again, social commentary isn’t Ratner’s primary purpose here- rather, the filmmaker whose direction has often been criticised as workmanlike is once again out to make the kind of broad commercial entertainment best characterised by his ‘Rush Hour’ trilogy. And by that standard, Ratner has succeeded immensely, delivering a high-energy comic caper that moves at a brisk clip and dishes out the laughs and the action in generous quantities. But perhaps his greatest accomplishment is to restore Eddie Murphy to his former ‘80s persona- yes, Murphy’s in top form here, and that alone should tell you how much fun ‘Tower Heist’ is.

(Lively entertaining heist caper that packs more than its fair share of laughs, thanks to a great ensemble cast- including a wisecracking Eddie Murphy back in top comedic form) 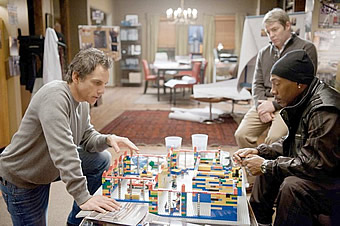 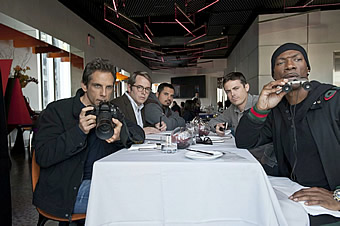 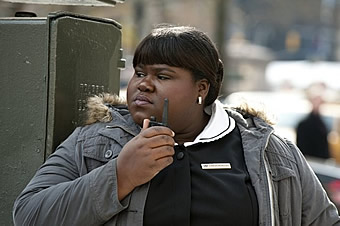 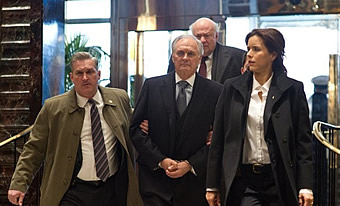