When three disparate souls, each with his own demons to fight, are being thrown together against the hustle and bustle of an emergency room, a hospital descends from a pristine sanctuary into an explosive battleground of stress and strife. Zhau is a young doctor who desperately needs a successful operation on a high-profile patient to redeem a previous failure which not only cost the life of a patient but her self-esteem. Han is a suspect of multiple armed robberies and homicides, who has been taken to the hospital after being shot with a bullet in his head during a showdown with the police. Officer Lok is at first sight a gung-ho policeman who has participated in the showdown, but when he makes desperate attempts to do Han in by exploiting Zhau’s weaknesses, it is apparent he is harboring a much darker secret. Shit hits the fan and all hell breaks loose when a platoon of armed robbers on a rescue mission starts fighting the police in the hospital with guns and ammunitions galore.

Like ‘Office’, Hong Kong auteur Johnnie To’s latest unfolds completely in a single location, where a trio of central characters will test each other morally and mentally as their paths cross one fateful day within the confines of a busy hospital. Zhao Wei’s neurosurgeon Dr Tong Qian is a tightly wound Type-A control freak whose overconfidence has left her struggling to regain confidence over her own capabilities. Wallace Chung’s Shun is a brilliant criminal psychopath whose interrogation under police custody has had him admitted with a bullet lodged in his brain. And last but not least is Louis Koo’s Inspector Chen, who needs not only for Shun to give up the locations of his consorts who are out on the streets planning more attacks but also to cover up the ‘accident’ that landed Shun in hospital.

As scripted by To regular Yau Nai-hoi with co-writers Lau Ho-leung and Mak Tin-shu, ‘Three’ adopts the same numerical act structure. The first forms an extended introduction to Dr Tong before Inspector Chen and Shun’s arrival as well as to the other kooky patients in her ward that are a stable of any Johnnie To crime film – among them, Lo Hoi-pang as an unusually cheery nutcase and Timmy Hung as a computer nerd who refuses to be discharged even after a six-month stay. The next act sets up the conflict among the key players, in particular as Dr Tong’s desperation to prove herself by going all out to care for Shun comes at odds with Inspector Chen’s lack thereof for Shun’s physical wellbeing. Dr Tong’s proclamation that she only has a six-hour window to operate on Shun imposes a countdown on the proceedings leading up to the third and final act, which builds up and culminates in a shootout when Shun’s accomplices (played by Michael Tse and Raymond Wong) sneak into hospital to try and break him out.

All too aware that his fans have been baited on the promise of flashy gunplay, To nonetheless challenges them to wait till the very end, relying instead on solid character work to keep his audience hooked. As with ‘Life with Principle’ and ‘Drug War’, ‘Three’ is occupied with flawed characters who are trying to make the best out of bad circumstances and past choices in their lives. On one hand, Chen is trying to contain the fallout from a botched police operation that may very well cost the career of his teammate; on the other, Tong needs to regain her personal and professional composure after inadvertently causing a spinal patient to become paralysed from the waist down and rendering into unconsciousness another patient with a brain aneurysm. Neither are obviously sympathetic protagonists, and for that matter Shun’s braininess quoting from the likes of Bertrand Russell and Hippocrates leaves one torn between fascination and reprehension.

Even though no bullets are fired in the first two acts, they are thoroughly engaging to watch, bolstered by intense performance by each one of the leads. Just as gripping is the most part of the third act, staged with To’s signature stylish flair and led handsomely by Lam Suet’s amusing supporting act as a bumbling detective who first stumbles upon one of Shun’s men before exploding in a perfect storm of bullets and mayhem. Oh yes, that climactic shootout is something to behold, a four-minute single take in slo-mo that begins down a long narrow corridor and continues into the ward encircling all the major and supporting characters – and would you believe that it was filmed by the cast manually simulating slo-mo, the sequence itself taking three months to rehearse and perfect?

Yet as impressive as the staging may be, To diminishes the impact of his own work by inserting a didactic ballad over its course. Not only that, To purposefully tones down the gore most likely to appease the Chinese censors and ensure playability in that market where more than half of the film’s credited investors hail from. Ditto the happy endings that see at least three of the characters discover their moral bearings and find redemption in their own ways, resulting in Deus-ex-Machinas which are awkward to say the very least. These compromises, both visually and narratively, result in a movie that ultimately cannot measure up to his earlier classic works like ‘Exiled’, ‘Election’ and ‘Vengeance’.

Despite its flaws, there’s no question that To remains a master of his game at fusing gripping character drama and riveting gunplay with occasional bursts of eccentric humour that defined his and the Milkyway brand name. ‘Three’ has more than a couple of flashes of the brilliance that we have come to expect from To’s crime thrillers, though its significance is dulled by a sugar-coated ending that his fans will surely not be used to. We never thought we had to say this about any To film, but ‘Three’ needs more grit and to be more hard-hitting especially at the end, without which it is no more than a solid but unspectacular entry into To’s otherwise illustrious oeuvre.

(Solid character work and intense performances make this Johnnie To crime thriller a gripping watch for the most part, let down otherwise by an artifically positive ending that feels awkward and unsatisfying) 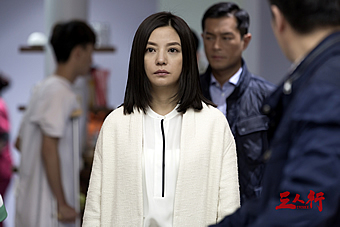