THE YEAR OF THE EVERLASTING STORM (2021)

Synopsis: A love letter to cinema, shot across the US, Iran, Chile, China and Thailand, by seven of today's most vital filmmakers. New life in the old house. A breakaway, a reunion. Surveillance and reconciliation. An unrecognizable world, in the year of the everlasting storm.

What a year it’s been. Covid-19 brought the world to its knees, showing up faultlines and shifting paradigms in a way no other historical event has laid claim to.

We’ve all had to adapt to these changes - some more inconvenient than others. From face masks and beeping apps, to isolation and strained relationships, the stories coming forth from these new experiences can also be inspiring.

From this dense year of change, three producers Brad Becker-Parton, Andrea Roa, Jeff Deutchman outlined a framework for an anthology from seven directors, inspired by Jafar Panahi’s This is not a Film. In the 2011 film, the Iranian filmmaker documents his state-imposed stay-home order for political reasons, and the producers sought to investigate the nature of filmmaking within tight restrictions. This became The Year of the Everlasting Storm.

What emerges may seem to be topics attached to the pandemic, but really, it’s more an ode to the celluloid craft. The producers term it as, “A love letter to cinema, shot across the US, Iran, Chile, China and Thailand, by seven of today's most vital filmmakers.”

This becomes clearer midway through the film. As we move into the third piece by Malik Vitthal, we start witnessing a more conceptual take, melding a parental story with animation. The story - told through recorded video calls between Bobby Jones and his three children fostered out - follows a narrative told half in conversation, half in prose. It’s fairly easy to follow still, even past the purposeful glitches, but what comes after, is a little less so.

Laura Poitras takes us on an expose of a nefarious company who weaponises data in “Terror Contagion” but the lengthy documentary-style piece felt like an overextended Zoom meeting forced upon us. The content itself is compelling, but the short format fails to credit enough context, and thus gravity. Relying on witnesses instead, it can come across as almost preachy.

“Sin Titulo” by Dominga Sotomayor and David Lowery’s “Dig up my darling” follows, and are two tender pieces that quietly approach milestone events during the pandemic and family bonds and dying wishes respectively.

The last, by Apichatpong Weerasethakul, goes full-hilt into art with an observational piece - “Night Colonies”. At the core, with whispered recordings taken from the demonstrations for democracy in Bangkok on 18 July and 27 August, the message of inadequate leadership is clear. But the lingering shots over lights, photos and insects help to flesh out the story, but lies heavy in the realm of interpretation.

Perhaps regular goers would enjoy the start more than the end for The Year of the Everlasting Storm. Panahi - who was initially not contributing - turned out a cheeky yet warm piece with a visitation from his mum, during the pandemic period. He is followed by Singapore’s own Anthony Chen, who documents a married couple’s estrangement, done with his signature acumen for teasing out the humanistic fragilities.

(This experimental anthology may not take root with some, but the pieces do resonate with the lingering effects of what the pandemic has wrought, and the global scale grants some relief) 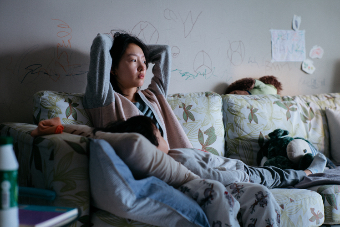