Synopsis: Writer/director/producer M. Night Shyamalan (The Sixth Sense, Signs, Unbreakable) and producer Jason Blum (Paranormal Activity, The Purge and Insidious series) welcome you to Universal Pictures’ The Visit. Shyamalan returns to his roots with the terrifying story of a brother and sister who are sent to their grandparents’ remote Pennsylvania farm for a weeklong trip. Once the children discover that the elderly couple is involved in something deeply disturbing, they see their chances of getting back home are growing smaller every day.

It’s been a long time since we’ve seen a decent M. Night Shyamalan film. Sure, we’ve heard some fans defend ‘Lady in the Water’, ‘The Happening’, ‘The Last Airbender’ and ‘After Earth’, but the vast majority of critics and audiences alike agree that they all suck. Even though Shyamalan has regained some measure of credibility with his Fox-produced TV series ‘Wayward Pines’, that hardly counts as comeback for a director who was once dubbed by Newsweek as “the next Spielberg”. And so, notwithstanding its billing as his shot at redemption, it is with much apprehension that we approached his latest low-budget thriller produced by no less than micro-budget genre master Jason Blum.

The good news is that ‘The Visit’ doesn’t suck, and indeed is probably his finest work in years. Mixing mirth and malice, Shyamalan writes and directs this cheeky horror about two kids - 15-year-old Becca (Olivia DeJonge) and 8-year-old Tyler (Ed Oxenbould) – who travel up to their grandparents’ rural Pennsylvania farm to spend a week with them. The kids have never met their grandparents, the result of a falling out with their mother (Kathryn Hahn) before they were born over their do-no-gooder father who has since walked out of their lives. Mom is however not prepared to make peace with Nana (Deanna Dunagan) and Pop Pop (Peter McRobbie) just yet, which explains why they are making the trip up on their own.

It isn’t just coincidence that Becca is an aspiring filmmaker; rather, Shyamalan uses the conceit of her shooting a documentary about her mother’s childhood home to justify the found-footage format in which he has chosen to tell his story. Shyamalan’s choice of technique may come as somewhat of a surprise to those familiar with his works, which have always been visually compelling thanks to the lensing of veterans like Tak Fujimoto, Roger Deakins and even Christopher Doyle. And yet, despite being increasingly overused, the device mostly works here, in large part because Shyamalan overcomes the constraints of the format with two handheld cameras and one laptop camera to capture the happenings (pun intended).

A game of hide-and-seek under the grandparents’ farmhouse is nicely filmed from both Becca and Tyler’s points of view at the same time. Besides what is directly outside the door, the additional camera allows Becca to record Nana’s nocturnal activities within the confines of the living room. And with the laptop camera, the kids are not just able to stay in touch with Mom via Skype, but also to pull off a neat twist late into the film that, while isn’t as earth-shattering as ‘The Sixth Sense’, is still effective enough to send shivers down your spine and restore some of the faith which he has all but lost with misfire after another. Getting to that point also proves to be a nice exercise in build-up, with a balance of both the weird and the wacky for good measure.

To be frank, the weird isn’t all that surprising, and consists primarily of Nana wandering around the spooky old farmhouse after 9:30 at night clawing at doors and going around on all fours, sometimes completely naked. If you’re looking for a particularly scary image, you probably won’t find any one that especially stands out. What is more unexpected is Shyamalan’s sense of humour, with Becca echoing the filmmaker’s gentle pokes at himself and other filmmakers through jargon such as “visual tension” and “ironic scoring” and Tyler expressing his bratty self through rap and an amusing habit of substituting the names of female singers like Katy Perry for expletives. Whether that is a good thing is probably subjective, but the truth remains that at least the first two acts is less terrifying than entertaining.

That credit belongs as well to DeJonge and Oxenbould, who recall the casting of Haley Joel Osment in Shyamalan’s breakout hit. Just as he did then, Shyamalan displays a keen eye for choosing kids, with Oxenbould displaying just the right blend of bravura and sweetness and DeJonge bringing emotional heft in later scenes that mull on forgiveness, reconciliation and the passage of time. Both Tony Award winner Dunagan and Scottish actor McRobbie are also well-casted in their grandparent roles, striking just the right note in campiness and eeriness as the movie progresses. Hahn brings the film to a touching close, and it probably wouldn’t have hurt to have her in the movie more.

As convenient as it may be to say that Shyamalan has simply retreated to familiar territory to make his comeback, ‘The Visit’ does show the once feted filmmaker try to do something different by loading the thriller with a generous helping of humour and attempt a creative spin on the tired faux-doc format. The fact that it hasn’t turned out ground-breaking may be disappointing alone for some, but there is no denying that ‘The Visit’ is engaging enough to stand on its own as a nice little comedy/ horror. Hey, it does boast a trademark twist better than ‘Signs’ or ‘The Village’, so if you’re willing to put aside his baggage of the past, you’ll find a quietly confident Shyamalan making a small but sure step towards his glory days.

(A solid return to form for M. Night Shyamalan, this unsettling horror laced with a generous dose of humour is no ‘Sixth Sense’ but will be good enough for some Saturday night fun) 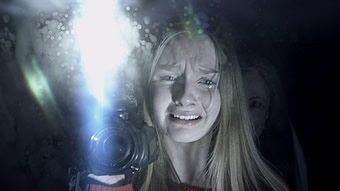 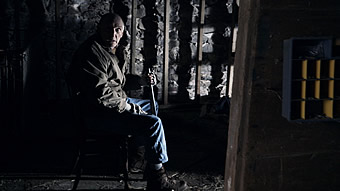 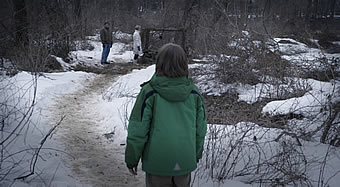