Synopsis: A former hotshot lawyer, now in recovery and estranged from her family, must take on the appeal of a woman wrongfully convicted of murder in order to be reinstated at the bar and regain custody of her daughter.

Kate Beckinsale has struggled to find a defining film role outside of the ‘Underworld’ franchise, and that unfortunately isn’t something which her latest courtroom drama ‘The Trials of Cate McCall’ is likely to change. Written and directed by Karen Moncrieff, it is an utterly forgettable tale of fiction about a troubled criminal lawyer who takes on the appeal of a woman seemingly wrongfully convicted of murder. And as evidence of just how bland it is, the movie did not even see the light of day in US and UK cinemas; instead, it headed right straight for the US telly channel Lifetime, where it had an equally unremarkable premiere.

To be sure, Beckinsale isn’t the reason why the film is that dull. Indeed, as the titular criminal lawyer, she makes for a somewhat engaging female lead not unlike that which she is better known for playing - both in ‘Underworld’ and here, she is a tough and ‘gung-ho’ female character whom one should know better than to mess with. Despite Beckinsale’s committed performance, the film is ultimately let down by Moncrieff’s ham-fisted scripting and equally inept directing, both of which we are sad to say hardly justifies the rest of the acting on display.

Yes, Beckinsale isn’t the only one you should pay attention to here; veteran actor Nick Nolte shines in a limited capacity as a fellow lawyer and AA sponsor who gives Cate McCall the moral and physical support she needs when the going gets tough. Ditto for Anna Anissimova, who pulls off an interesting hat trick first by pushing all the right buttons to earn your sympathy and then making you question just how culpable she is of the charge she has been convicted and is serving sentence for - Anissimova is Lacey Stubbs, whose case Cate is assigned to pro bono while attempting to get her life back on track.

But hey whether Beckinsale or Nolte or Anissimova, neither surmount the obvious flaws of the movie. For one, there’s the depiction of the US judicial system, which according to Moncrieff is no more than a contest for liars. Not only is it too easy for Cate to poke holes at the state’s case, it is laughable to think that the judge on the retrial - a certain Judge Sumpter played by James Cromwell - would in fact be a lecherous S.O.B. who is simply using the case as a means of getting himself a seat on the bench. Moncrieff hardly respects her audience’s intelligence in trying to paint how effortlessly Cate overthrows an earlier verdict handed down by another judge’s courts.

Just as quickly it seems, Cate realises the folly of her own actions, as Lacey turns out to be more than meets the eye. In between deciding whether to choose her career or her family, Cate then decides to engineer an opportunity for the state to revisit the same case again, this time providing them with the crucial evidence necessary to prove that Lacey is in fact lying. By the time Cate steps back into the courtroom to ‘defend’ Lacey, the movie has already lost any shred of credibility, and it doesn’t help that Moncrieff doesn’t seem to have a handle on how to craft a compelling sequence on film.

Like we said, if there was ever a reason why the film remains watchable, that is because its actors manage to carry the weight of the movie on their shoulders. It is also probably of their names that this direct to telly movie is even getting a cinematic release here, but not quite enough that you won’t be able to see through the many faults of the storytelling. There hasn’t been a good courtroom drama of late, but we suspect ‘The Trials of Cate McCall’ is scant reason for a revival of interest in the sub-genre. 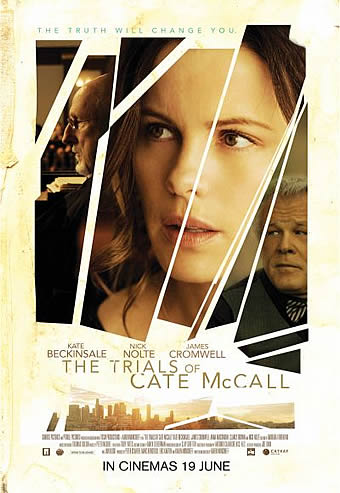