Synopsis: When a deadly fire breaks out in an apartment tower, rescuers and those trapped share a common goal: To get their loved ones out Single father Dae-ho (KIM Sang-kyung) is the facilities manager at an exclusive residential complex, Tower Sky. Despite having to work late, he promises his young daughter, Ha-na the best Christmas Eve ever. Yoon-hee, who Dae-ho is privately infatuated with, offers to watch Ha-na while Dae-ho is called to an emergency and the girls quickly forge a bond. Young-kee (SUL Kyung-gu), a veteran fire captain at Yeouido Station, takes the evening off to spend Christmas Eve with his wife for the first time. It's supposed to be the happiest evening of the year for everyone, but a terrible accident starts a fire in Tower Sky and changes everything. Amid one of the city’s worst disasters, a story of ordinary people who hang on to hope to the bitter end unfolds.

As far as disaster movies go, ‘The Tower’ hardly reinvents the wheel, but even though it sticks to formula, audiences looking for B-movie thrills will love the adrenaline rush it gives you from start to finish. Clearly inspired by the 1974 Hollywood classic ‘The Towering Inferno’, it uses the same premise of a luxurious skyscraper that catches fire one fateful day to devise a continuous series of high-octane action sequences that will keep you on the edge of your seat.

True to its genre, the first half-hour is spent introducing the bevy of characters whose fates will intertwine. Chief among them is the building’s security and maintenance operations manager Dae-ho (Kim Sang-gyeong), a single father to a precocious young girl, Hana, whom he promises to that it will snow on Christmas Eve. That is also the reason why Hana eventually finds herself at the ill-fated Tower Sky residential complex, made up of two adjacent towers connected by a sky bridge at the 70th floor.

Dae-ho is infatuated with kitchen manager Yoon-hee (Son Ye-jin), who offers to look after Hana while he goes about ensuring that the preparations for the management’s lavish Christmas Eve party go according to plan. The occasion turns out to be the reason of the calamity, as the management’s egotistical President Cho (Cha In-pyo) arranges a fleet of helicopters to rain snow down from near the top of the building – despite being earlier advised of possible strong vertical drafts - just so he can impress the residents.

After seeing his wish of a ‘White Christmas’ come true, an even more wowing spectacle awaits when a sudden gust causes one of the helicopters to lose control and crash into one of the twin towers. Immediately, the upper floors become engulfed in flames, leading to the activation of the men stationed at the Yeoudio Fire Station – including the veteran captain Young-kee (Sul Kyung-gu) who forsakes his promise to his wife to spend the night with her in order to join his comrades in the firefight.

Young-kee turns out to be a key player in the rescue of those trapped, as Kim Sang-don’s workmanlike screenplay sets him up as the proverbial selfless hero whose bravery is ultimately milked for high-pitched theatrics. The rest of the characters are similarly delineated in terms of tropes – whether Dae-ho as the nerve-wracked father constantly worrying about the safety of his daughter, or President Cho as the devious businessman cum de facto villain of the film. The most inspired bit of Sang-don’s writing is in the addition of a group of devout Christians gathered to celebrate Christmas for comic relief, whose prayers for help are inadvertently always answered.

It is to director Kim Ji-hoon’s credit that the film never has a dull moment despite the formulaic script. Right from the start, he confidently demonstrates his ability to navigate seamlessly between the various points-of-view of the various characters, and that adroitness proves useful in maintaining a tense and taut atmosphere throughout the movie. He also keeps the movie well-paced and easy to follow, with the first half focused on extinguishing the fire from within its source and the second on evacuating as many people as possible before the weakened tower collapses under its own weight.

Within that two-act narrative, Ji-hoon engineers some truly gripping sequences. The helicopter crash is the first of the money-shots, and by deftly combining actual images with CGI, it amply demonstrates that the Koreans have caught up with Hollywood in terms of visual effects. Besides the spectacle, two particular scenes stand out – the first where a ragtag group of survivors make a perilous crossing from one tower to another using the sky bridge, whose steel and glass structure is at risk of collapsing; and the second where who’s left of the same group pack themselves into an elevator and attempt to free-fall it down around 60 floors to escape the crumbling tower.

Next to the top-drawer special effects, the cast and their acting unfortunately play second fiddle. Nonetheless, they play their roles with conviction, in particular Sang-gyeong and Kyung-gu – though the most memorable actor here is not one of the leading cast, but rather Kim In-hwon, who plays a jocular firefighter hailed as a saviour by the group of Christians after turning up at a particularly opportune moment.

Still, the main attraction is the visuals, which under Ji-hoon’s confident hand (who was also behind ‘Sector 7’), prove to be very impressive for an Asian film. Any criticism that the pleasures to be had here are no more than B-movie thrills is moot – after all, that’s exactly what ‘The Tower’ intends to deliver. Indeed, if you’re looking for a gripping two-hour adrenaline high, then this big-budget action disaster film is just that shot in the arm for sheer exhilaration.

(Exactly what you expect in a big-budget disaster movie – taut suspense, thrilling sequences, and overwrought emotions – to leave you on an adrenaline high) 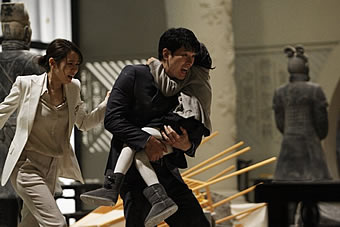 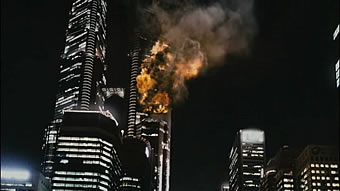 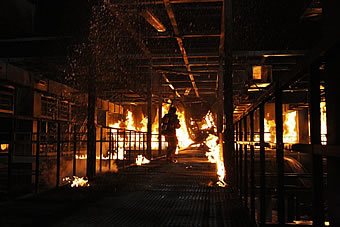 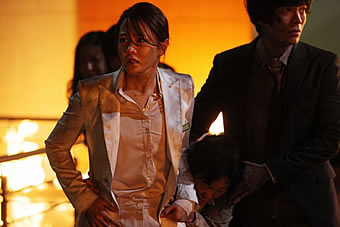