Synopsis: The Theory of Everything is the extraordinaryand uplifting story of one of the world’s greatest living minds, the renowned astrophysicist Stephen Hawking, and of two people defying the steepest of odds through love. The film, based on the memoir Travelling to Infinity: My Life with Stephen, by Jane Hawking, is directed by Academy Award winner James Marsh (Man on Wire).

In 1963, as a cosmology student at the storied U.K. university Cambridge, Stephen (portrayed by Eddie Redmayne of Les Misérables) is making great strides and is determined to find a “simple, eloquent explanation” for the universe. His own world opens up when he falls deeply in love with an arts major, fellow Cambridge student Jane Wilde (Felicity Jones of The Invisible Woman). But, at 21 years of age, this healthy, active young man receives an earth- shattering diagnosis: motor neuron disease will attack his limbs and his abilities, leaving him with limited speech and movement, and will take his life within two years. Jane’s love, fierce support, and determination are unwavering–and the duo weds. With his new wife fighting tirelessly by his side, Stephen refuses to accept his diagnosis. Jane encourages Stephen to finish his doctorate, which includes his initial theory of the creation of the universe. They start a family, and with his newly earned and widely hailed doctorate Stephen embarks on his most ambitious scientific work, studying the very thing he now has precious little of – time.

As his body faces more limits, his mind continues to explore the outer limits of theoretical physics. Together, he and Jane defy impossible odds, breaking new ground in medicine and science, and achieving more than they could ever have dreamed–well into the 21st century.

When I went in to the cinema, I was expecting to watch a biopic about Steven Hawking’s incredible life and discoveries. The movie was adapted from the memoir, “Travelling to Infinity: My Life with Stephen” by Jane Wilde Hawking. I was initially worried that the narrative aspect of the film would bore me. The Theory of Everything was so much more. While maintaining the structure of a linear narrative, the movie surprises and does a marvelous job of exploring the complexities of humanity, love and marriage.

The main theme of the movie surrounds this simple but powerful notion - There should be no boundary to human endeavor. The movie also exceeds the boundaries of a typical biopic and excels in almost everything it sets out to achieve. The movie doesn’t have a long introduction; we are quickly introduced to a young Steven Hawking (Eddie Redmayne), full of zest and on the precipice of greatness. He enrolls in Cambridge for his PHD in cosmology and meets Jane Wilde (Felicity Jones) and unabashedly pursues her. Jane is his complete opposite; she looks to religion to provide answers, while he looks for a single scientific theory to explain everything. This serves as an initial attraction point for the two, but continues to wane from the weight of Steven’s motor neuron disease and Wilde’s ambitions to be more than just in Steven’s shadow.

The treatment of the plot is excellent – it does not delve into the unnecessary or irrational details of the film. You feel yourself being pulled into the beautiful cinematography – the visuals of the cosmos were not as overwhelming as Interstellar but still memorable. The biopic doesn’t explore many things about Steven’s life – and this is James Marsh’s brilliance. The director could have gone into trying to capture every detail of the memoir or possibly try to capture every great moment of Steven’s life. This was a man that lived to discover new unchartered territory in science, and also defied human expectations by living large despite a crippling disease. Marsh faces great pressure to deliver a touching biopic about an incredible man.

However, Marsh decided to pick a few poignant themes in Steven’s life that would resonate with the audience and excelled in doing so. He did not get lost in trying to capture the details of Steven’s life. I watched the film and repeatedly made mental notes wherever a great directorial choice was made – from the choice to use repetitive circular/spiral imagery to the way he directs his actors to move across the screen. Never have I been so enthralled by the way an actor holds a chalk in his hand. It will probably also take me a while to forget how Felicity Jones shook with fear and anguish as she saw a defeated Steven playing croquette with her. Marsh explores the relationship between Jane and Steven beautifully – he shows that love in marriage is not always absolute, and his treatment of the “grey area” that life often presents us is convincing and thought provoking. I left the cinema feeling less and more an idealist – if that’s even possible. Marsh tests his audience’s boundaries, and I love a director that tries to do more than just entertain.

A combination of great casting and direction has contributed to the success of Theory. The greatest achievement of the film is the full exploitation of Eddie Redmayne’s incredible acting talent. I barely recognized him in Theory; he looked nothing like Marius Pontmercy from 2013’s Les Miserables. Some actors have some characteristics or mannerisms that they would call their signature. But Redmayne is a true chameleon and deserves the Oscar buzz surrounding his work in Theory - he is astonishing in his role as Steven Hawking. While his talent was put to the test at the later part of the film where he had to showcase his advanced motor neuron disease, his best delivery was in the earlier half of the film. Redmayne mesmerized as a young Steven – he was gangly and awkward, yet completely charming. His subtle movements/clumsiness were perfectly executed to display his early stages of motor neuron disease. Redmayne exhibits greatness as he manages to tread the “grey” carefully; we are able to sympathize with and also disassociate ourselves from his role. One minute we understand Steven’s pain, and the next we are aghast by Steven’s nonchalance towards Jane. Of course, Jones does an excellent job matching Redmayne’s talent, especially seen in scenes with Charlie Cox. Chemistry between Jones and Redmayne is also incredible, especially when we get to see Steven through Jane’s eyes. The audience fell in love with Steven the same moment Jane did.

The movie is not perfect – fans of Steven Hawking’s ideas would have hoped for more theoretical discussion on quantum physics and relativity, or more on his views on religion and creationists. Fans of the memoir would have hoped for juicy details on the relationships between Steven and Elaine, or Jane and Jonathan. But Theory is in a league of its own – it is honest, subtle and doesn’t need any more jazz.

(An excellent movie for the lovers, dreamers and believers) 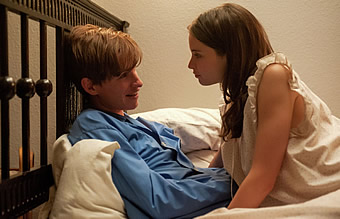