Synopsis: The movie starts with Wei’s (River Huang) grandma disappeared for no reason but her housework and routines were always completed, strangely. Wei was clueless about it till he finds a video in his grandma’s camera showing that there was a little girl in red tagging along her. Oddly, after Wei’s grandma finally returns, Wei goes missing instead. Struggling to unravel the enigma, Wei’s girlfriend Yi-Chun (Wei-ning Hse) gradually discovers that the mysteries behind missing Wei and his grandma might be linked to the “The Little Girl in Red”, but what is worse is yet to come…

‘The Tag-Along’ takes a well-known urban legend in Taiwan and turns it into a bone-chilling mystery built around themes of loss, regret and familial love. Depending on your knowledge of Taiwanese folklore, you may or may not have heard of the ‘little girl in red’, who was infamously captured by a group of climbers on home video making their way along a mountain trail. That video was broadcast on television way back in 1988, and since then, others have reported similar sightings of a little girl in a red dress just before they had met with some form of calamity. Legend has it that the girl is a mountain demon known as ‘mo-sien’ (or 魔神仔 in Chinese), which preys on fear and guilt and is particularly drawn to children and the elderly.

So it is that the first to disappear in the film is an elderly woman who happens to be good friends with our lead male protagonist’s grandma (Liu Yin–shang), a curmudgeonly lady confronted with the same fate one typical morning after making breakfast for her grandson Wei (River Huang). It will be a couple of days before Wei realises that she has gone missing – despite being his caretaker from young, Wei’s busy work schedule as a real estate agent have kept the two apart in recent times, leaving his grandmother in constant lament about how little he sleeps every night and how little time he spends at home with her. Their estrangement is also in part due to Wei’s relationship with his girlfriend Yi-chun (Hsu Wei Ning), who harbours no plans to get married, settle down or have kids even after five years, much to Wei’s grandmother’s dismay.

As you can expect, there is a lesson here on taking the ones who love us for granted – and as we learn through a series of flashbacks, Wei had made a promise to his grandmother when he was a kid that he would have dinner with her every night, even scribbling it on the underside of their dinner table. But it isn’t just Wei who has a lesson to be learnt; midway through the film, Wei’s grandmother is found walking lost and disoriented along a stretch of highway, right after Wei himself vanishes. Just as Wei had been taking his grandmother for granted, so has Yi-chun been doing likewise of Wei, and the second half of the film is as much about Yi-chun digging deeper into the legend of the ‘mo-sien’ as it is about her learning the depths of Wei’s love for her.

If there is one thing that Jian Shi-geng’s screenplay gets right, it is in establishing the relationships between Wei and his grandmother as well as between Wei and Yi-chun with careful attention and detail. Not only do we feel for Wei mourning the loss of his grandmother, we empathise with Yi-chun coping with the sudden departure of Wei, and within these two relationships, Jian makes keenly felt the regret we often face when the people who love us but whom we take for granted are abruptly taken away from us. The latter allows the climax set deep in a patch of dense forest to be both scary yet heartfelt, as Yi-chun resolves to save Wei from the clutches of the mountain demon that assumes the form of the ‘little red girl’.

On his part, Cheng Wei-hao, who makes his feature filmmaking debut here, largely succeeds in sustaining a tense and uneasy atmosphere throughout the film. There are a couple of nicely earned ‘jump’ scares here, but what lingers is the sense of dread that he builds with the creaking of a door, the rustle of the wind and the voice of a little girl. Cheng loves to play with his audience’s sense of focus, and an oft-used but nonetheless effective technique is how he teases us with something that we should be seeing on the periphery of the frame just before it jumps in our face. Just as well, Cheng hits the emotional beats of Jian’s script nicely – in particular, an early sequence that shows Wei’s grandmother trying to wake Wei up for work when his alarm rings and then preparing his breakfast and lunch box for him pays off subsequently in unexpectedly emotional ways.

No wonder then that ‘The Tag-Along’ has gone on to become the most successful horror movie in Taiwan in a decade – like the best of its genre, it isn’t just a scattershot collection of scares but rather a poignant lesson on human nature that tugs on your heartstrings as much as it rattles your nerves. To be fair, it does owe its audience a couple of loose ends, and the CGI-heavy climax does border on overkill, but on the whole, Cheng’s maiden entry to the horror genre is a spooky atmospheric affair that bears a foreboding omnipresence. At no point do you ever feel that its thrills are cheap or convenient, nor does it lose its emotional hook along the way, so if you’re looking for a good scare, you’ll find yourself in good company if you follow the little girl in red.

(Tense, atmospheric and unsettling, this tale of loss, regret and familial love packs a surprisingly moving lesson on cherishing our loved ones whom we often take for granted) 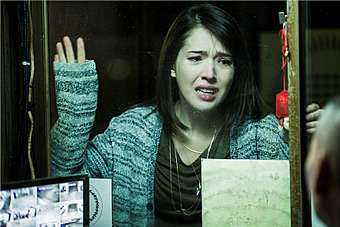 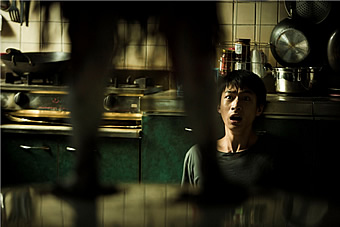 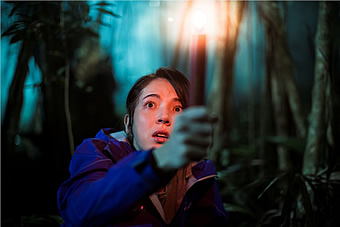