Synopsis: Based on the book “Harry Haft: Survivor of Auschwitz, Challenger of Rocky Marciano” by Alan Scott Haft. THE SURVIVOR is based on the true story of Harry Haft (Ben Foster), who is driven by his love of a woman to survive the unimaginable horrors of the German concentration camps. An SS Officer (Billy Magnussen) forces Harry to fight to the death against fellow prisoners in gruesome gladiatorial boxing matches. Harry finally escapes and makes it to New York. Haunted by his memories and guilt over his survival, he fights boxing legends, like Rocky Marciano (Anthony Molinari), in the hopes that his name will get noticed and he will find his first love again.

It is easy to celebrate the tenacity of a Jewish survivor from the concentration camps, perhaps even more so one from the most infamous of them all, Auschwitz. Though so named to refer to its lead character’s escape, veteran director Barry Levinson’s drama doesn’t so much laud his triumph than to question at what cost that came at for Polish Jew Harry Haft.

Best known for being a lightweight boxer in post-World War II New York who had introduced himself as ‘the pride of Poland, the survivor of Auschwitz’, Haft’s biggest accomplishment was withstanding three rounds against future champ Rocky Marciano. That this climax of Haft’s boxing career comes right smack in the middle of the film demonstrates how it really isn’t the focus of ‘The Survivor’; rather, as we learn, boxing was ultimately a means of coming to terms with his past.

Over the course of two hours, Levinson and screenwriter Justine Juel Gilmer outline the depth of Harry’s guilt. On one level, Harry feels obliged to find out just what happened to Leah (Dar Zuzovsky), a girl he loved as a young adult whom he was powerless to stop from being taken by the Nazis. On another level, Harry is haunted by how he had fought other Jews in bouts held for the entertainment of Nazi officers in Auschwitz, after being handpicked by a young S.S. officer Schneider (Billy Magnussen) who had watched him come to the rescue of a friend Jean (Laurent Papot) in the camps against a German guard.

Through interlocked flashbacks from a family vacation in Tybee Island, Georgia, whose significance will only be apparent late into the film, Levinson reveals the layers behind Harry’s grief and remorse. Both on Harry’s shell-shocked countenance and on the faces of the fellow prisoners watching the gladiatorial fights in horror, Levinson portrays the gravity of Harry’s decision to brutalise his comrades in order to survive the camps, as well as the visceral and mental toll it inevitably exerts on him.

As Harry, Foster is phenomenal, committing not just physically but emotionally to bring to life one of the most challenging roles of his career. Foster’s physical transformation is humbling, first losing about 40 pounds to play the nearly-emancipated Auschwitz incarnation of his character, and then bulking up to play Harry as a professional boxer after the war. And proving himself once again as one of this generation’s finest character actors, Foster brings across Harry’s guilt, anger, loss and hope with absolute candour and poignance. Foster has great assist from the likes of Danny DeVito, John Leguizamo and Peter Sarsgaard, but this is Foster’s show and he carries the show from start to finish.

It is also equally true that ‘The Survivor’ is probably Levinson’s finest work in a while. Granted that the director of ‘Rain Man’ and ‘Wag the Dog’ hasn’t been as prolific in recent years, but this Holocaust drama offers the sort of complex and nuanced character study which he does beautifully and affectingly. That he refuses to follow convention as either a sports drama or a romantic saga is ultimately to the film’s benefit; in choosing neither to idolise or demonise its lead character, Levinson stays true to his intent to tell the story of Harry Haft as a survivor, for better and for worse.

(Appriopriately intimate and sobering, this Holocaust drama of one Auschwitz survivor examines the cost of staying alive amidst terror and atrocity) 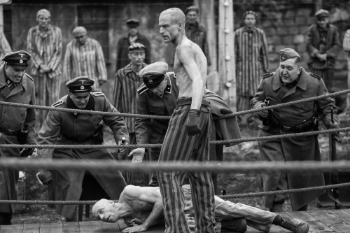